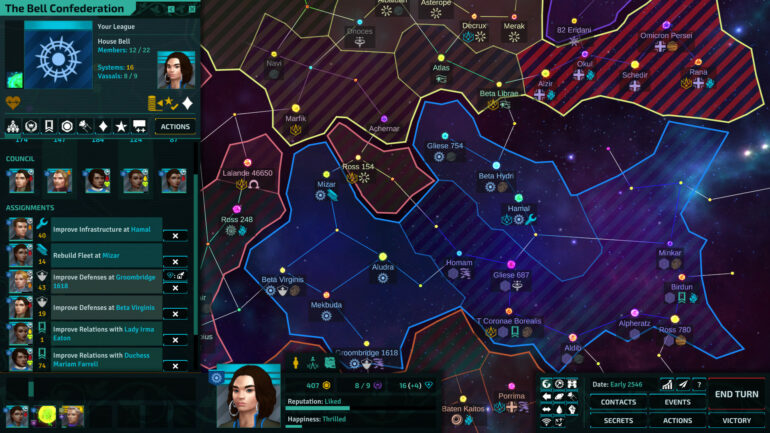 Developer Pawley Games and publisher Iceberg Interactive have finally brought their space simulation title Star Dynasties to Steam Early Access. Their role-playing sci-fi strategy game looks to dethrone Crusader Kings as the king of empire management, by infusing it with some spacefaring flair. Lead Developer of Pawley Games, Glen Pawley, talked about his excitement for the project and what’s around the corner.

Star Dynasties is almost complete, and I’m excited to invite players to join us on the last leg of the journey. We’ve got some interesting features planned over the next six months to round out the experience – but what I’m most looking forward to is seeing how player feedback will influence the final shape of the project. The beta tests we’ve run have been some of the most stimulating periods of working on the game, and I hope Early Access will be as enjoyable, for both us and the community.

What Is Star Dynasties?

Star Dynasties is set in a universe in which the Earth has been destroyed. The galaxy is now divided, and it’s up to the player to reunite it under their stern leadership. This is a role-playing game, and as such there will be plenty of ways to go about ruling the galaxy. Whether it’s through espionage, deceit or negotiations, it will be up to you to reclaim the galaxy and bring order to a divided people. Here’s everything you can expect should you pick up Star Dynasties:

For those of you salivating at the sound of Star Dynasties, you won’t have long to wait. In fact, you won’t have to wait at all! Star Dynasties is available over on Steam right now. It costs $24.99/£19.99, but currently has a 10% discount! If this intrigues you, then head on over to its Steam store page and nab it while sales last! Will you be picking up Star Dynasties? Does this look like the next Crusader Kings? Let us know what you think in the comments down below!