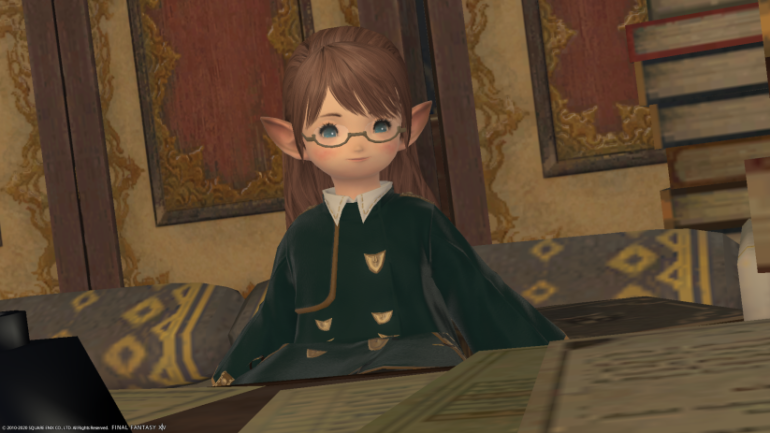 Final Fantasy XIV and Me is an interview series where I highlight mental health and how MMORPGs, in particular, can directly affect how you feel. This has been a passion project which I have wanted to do for a long time and throughout it, I will be interviewing all kinds of people. From game veterans to beginners taking their first steps in the world of Hydaelyn.

So I would like to introduce you to my first guest, I hope she is made to feel welcome. She is a close friend of mine and we also met through Final Fantasy XIV.

So, pack your chocobos and please journey with me into the realm of Hydaelyn.

Thank you for taking time out of your day to answer some of my questions. Please, can you introduce yourself?

Hi! My name is Zoe. I’ve been playing Final Fantasy XIV for about four years and go by the name of Elora Rhiki in-game. I originally started on the Zodiark server, but then moved to Moogle server after a year. I never really stick as one race for too long, but I always go back to either Viera and Lalafell, and I predominately play as Black Mage.

So when and how did you get into the Final Fantasy series?

I got into playing Final Fantasy when I was pretty young. I think I was about eight or nine when my older brother, and I discovered Final Fantasy X on Playstation 2 at Blockbuster. We rented it out so many times, but never got round to completing it, even still, I loved the story and the characters. It will always have a special place in my heart as it was the first Final Fantasy game I played, and I loved playing it again when the remaster came out.

So tell me, how did you get into Final Fantasy XIV. Was it the love at first sight? or did it take you a while to warm up to the world of Hydaelyn?

Honestly, I wasn’t too interested when I first tried it. I started playing on Playstation 4 (I even went all out and brought the collectors edition). I thought it looked interesting and had heard about the character creator, but when I started I didn’t have a keyboard. So using the chat in-game was extremely frustrating, and time-consuming so I didn’t interact with anyone and soon got bored of the long queue times as a DPS.

I remembered waiting for the Garuda trial to progress the main scenario, and I ended up waiting longer than an hour and still hadn’t got in so that was it for me. I didn’t pick it up again until after the launch of Heavensward expansion and this time I made the conscious effort to be more social in the game (Final Fantasy XIV); to find a Free Company (Guild) and actually have/find people to play the game with. So that it would be more interesting. I’m so glad I give it a second chance because I haven’t stopped playing since!

Sounds like you had a whirlwind romance with the game. But is there something in particular that pulled you back into the world of Hydaelyn?

The friendships I’ve made really kept me coming back to the game. The very first friend I made in-game was when I was waiting around, and outside the first dungeon (Sastasha). I was quietly minding my own business and a cat boy (Miqo’te) bounced over and asked if I wanted to form a party since we were two DPS trying to queue. I’m generally quite a shy and nervous person and hadn’t had much experience talking to people online before, so initially, I was apprehensive but I really wanted to give this game a good chance, so I agreed.

What sort of emotions and feelings did you have?

I’m so thankful I did because, thanks to this first interaction, I was able to open up more and get out of my comfort zone, meet new friends to play the game (FFXIV), and eventually it helped me to feel more comfortable in myself. I did things I wouldn’t normally do. I even ended us falling in love and began a long-distance relationship for nearly four years. All thanks to Final Fantasy XIV. Even though the said relationship didn’t work out in the end, I’m thankful for the experiences that this game has given me. I’ve met some of the most amazing people through this game and even though we may be in different parts of the world, it doesn’t stop us having real, and meaningful friendships while being supportive of whatever is happening in our lives.

It’s truly touching to see that one decision we make which seemed like nothing, for example, deciding to pick up a game, can actually change your whole future.

Yeah, it definitely felt like a ‘right place, right time’ kind of moment. If I hadn’t started playing the game again would I still be the same person I am today? If that cat boy (Miqo’te) didn’t ask me to join him in that first dungeon (Sastasha), would I have ended up in a different group of friends? Would I have even kept playing? You could go on and on about how different things could have been. I’m just happy things worked out the way they did.

“So playing the game it actually helped me meet others”

So with this interview, I want to pay particular interest and highlight the mental health in correlation with gaming. So may I ask, has Final Fantasy XIV played any particular role in regards to your own mental health?

I would have to say over the years it’s helped me in a positive way, rather than a negative. It’s helped me to come out of my shell, to have more confidence in myself, and that I’m not alone. By the time I joined Final Fantasy XIV I was in a slightly better place mentally than I had been but it was still unsteady ground for myself. So by playing the game it actually helped me to meet others who felt the same way, and had been through similar experiences. I found friends who would reassure me that those thoughts weren’t true and it helped me to become the person I am today!

You speak highly of the friends you’ve made and the positive experience it’s had your mental health, which is always so lovely to see. But also not everything can be all sunshine and rainbows. Has there ever been a part of this game where you’ve had a negative impact on your mental health?

I feel like I am lucky to say I haven’t experienced too much negativity with Final Fantasy XIV. There is always, of course, some level of negativity in a community as big as this. Thankfully, the most negativity I have personally experienced has been quite small, such as an overly cocky player who thinks they know better or along those lines. But my mental health in regards to negativity hasn’t really been affected. It’s been nothing but positive for me. I am lucky I guess!

Has there ever been a moment where you’ve had a negative experience with other players in-game?

Thankfully, I’ve not really had any negative experiences toward me specifically. Although, I have had to help stand up for other players during a dungeon when someone was being unpleasant or when inpatient with new players.

So going back to your friends you’ve made. What is your fondest memory you’ve shared with them?

I will always have a special place in my heart for Halloween in Final Fantasy XIV, or as it’s known in the game itself ‘All Saints Wake’, because we would always do a little event where we’d dress up as a character, not from Final Fantasy XIV. And last Halloween we did a scavenger hunt. Either that or when I was actually able to meet up with them outside the game! Anytime we’re together is always fun!

What would you say to someone who is interested in the game but isn’t sure if they should take the leap into the world of Eorzea?

I think the best advice is to just make sure you know what kind of game you’re wanting to get into! This is an MMORPG, and while it’s not completely necessary to talk to people while playing, it does help to give you the full experience. In order to progress in the story then you do have to work together with others. Also, when in doubt, Google is definitely your best friend if you want to find out what others think of the game to get a feel for it.

Ever since they streamlined A Realm Reborn, it’s a lot more new player friendly, instead of a slog it once was.

Oh yeah, definitely! I remember it was such a drag getting through the hundreds of run-around quests but I think that was part of the charm for me. The fact that you don’t start the story as this amazing hero that will save everyone. You start your journey just like every other adventurer in that world and build your reputation up by going through mediocre tasks such as trying to track down wine and cheese for a party! I’d haven’t played through the main scenario in a while and would definitely be interested to see the changed things, but I would like to someday, just out of curiosity.

One final question; In all the Final Fantasy games you’ve played, what is the one thing you’d love to see implemented into Final Fantasy XIV?

Oh god, that’s such a difficult question! Probably Biltzball from Final Fantasy X. Either that or some kind of implementation of the battle style of Final Fantasy VII Crisis Core, maybe a game at the Golden Saucer, that would be cool!

Thank you so much for your time, it’s nice to hear about your experiences in the world of Hydaelyn! Do you have any parting words?

Thank you for letting me be a part of your article. I’m happy I was able to share my own thoughts, experiences and hopefully it shows that even though there are, of course, some negative aspects, there are so many positive things that can come from this game. It’s thanks to this (Final Fantasy XIV), and the friends that I’ve made. I’ll forever be thankful that I started playing when I did!

Thank you so much once more and keep safe!