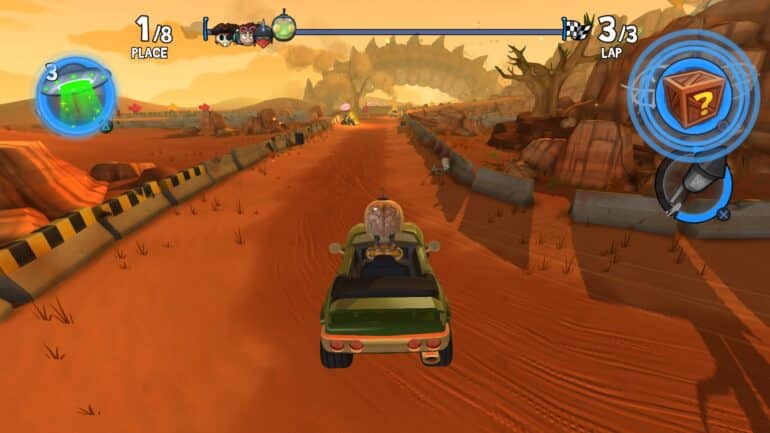 The first UK lockdown was brutally difficult. I was forced to be miles away from my girlfriend; trapped in my home with my farting, barking, wet dog; and stuck with little else to do but catch up on my arduously exhaustive backlog. But as time went on, I started to feel disconnected from my family. So, when I noticed Beach Buggy Racing on the PlayStation Store, I saw not only a fun romp through jungles and temples, but a way to reconnect with my brother. Beach Buggy Racing singlehandedly got us through that first lockdown. Upon hearing that a sequel was releasing within only a matter of days, my face was filled with glee. I jumped at the opportunity to review it! Playing Beach Buggy Racing 2: Island Adventure truly felt like a warm and welcoming embrace. So much so, it helped me remember the fonder days of yesteryear.

“My main problem with Beach Buggy Racing 2: Island Adventure’s campaign is the recycling of content from the previous game.”

Beach Buggy Racing 2: Island Adventure takes what made the original great and innovates upon it immensely. Perhaps the biggest change is the inclusion of a campaign mode. While I fondly remember playing Beach Buggy Racing cooperatively, I have no such memories of playing it independently. Beach Buggy Racing 2: Island Adventure’s campaign mode involves the player progressing through a series of modes across a map, unlocking stars, characters, vehicles and paint jobs as they do. Each mode offers a change of pace which ensures that the campaign never felt stale. Furthermore, the inclusion of secret areas and unlocks means that there’s often plenty of motivation to achieve all three-stars in each race.

My main problem with Beach Buggy Racing 2: Island Adventure’s campaign, and by extension the game itself, is the recycling of content from the previous game. While it’s worth noting that there are several new maps, power-ups and characters, most of the tracks featured in this sequel are from the original title. While it is nice to replay these maps with the sequel’s enhanced visuals, new abilities and characters, it comes at the detriment of the campaign mode. Not only does the limited number of maps hinder my enjoyment of the campaign, as they are reused to fill up the lengthy mode, but the fact that many of them are pre-existing maps means I’m all too familiar with them.

“It is readily apparent that the philosophy behind Beach Buggy Racing 2: Island Adventure’s design is that it should be as explosively fun and excessively extravagant as possible.”

Fortunately, Beach Buggy Racing 2: Island Adventure innovates enough upon the original that while I was initially taken aback by the reuse of maps, it eventually became a distant memory. This is, in large part, because the maps used are often mirrored or reversed. Additionally, the music tracks featured within them change with each run. While it is apparent that it is the same map, the differentiation in layout, and even weather at times, mitigates the monotony it could have potentially faced. Furthermore, the game’s core gameplay is so extraordinarily enjoyable that I long forgot any issues I may have had with the game.

It becomes readily apparent that the philosophy behind Beach Buggy Racing 2: Island Adventure’s design is that it should be as explosively fun and excessively extravagant as possible. Each map has been designed to allow for maximum carnage. Each racer has a unique ability that will often either buff themselves or hinder their opponents. One such racer, Beach Bro, can deploy a tidal wave of beach balls at his enemies. Should you drive into one, you are launched into the air. Often maps are created with tight caves or sharp turns, so that should help you hit into one of Beach Bro’s signature beach balls, or perhaps be sent hurtling through the air thanks to the power-up big wheels, you’ll crash into something or be flung into the ocean.

“While the original was never ugly, its sequel features higher resolution textures and a more stylised approach.”

The hectic and frantic nature of the Beach Buggy Racing franchise is what makes it incredibly enamouring. Whenever your character dies, they’re flung around like a ragdoll, their car barrelling off into the distance. Numerous power-ups affect everyone, causing countless pile-ups and crashes. It might seem a little frustrating for first-time players, as you’re hit with something rather frequently. Fortunately, Vector Unit have considered this carefully when creating Beach Buggy Racing 2: Island Adventure. It is designed so that whenever you are hit or crash, you recover rather speedily.

For those of us who have played Beach Buggy Racing before, these compliments seem equally applicable to that title as they are to its sequel. So, where exactly does Beach Buggy Racing 2: Island Adventure innovate. Firstly, and most apparently, is in its visuals. While Beach Buggy Racing was never ugly, its sequel features higher resolution textures and a more stylised approach. Sure, it doesn’t look as good as Mario Kart or Sonic Team Racing. But, the improvements made to its visuals assure that it shouldn’t age too horrible.

“The new power-ups feel substantial enough and make enough of a noticeable impact on races.”

Secondly, the numerous new abilities add a lot more diversity to each race and keep you on your toes. I felt like the new power-ups felt substantial enough and made enough of a noticeable impact on races. It was never difficult figuring out what exactly each one did without requiring a tutorial. Some of the newer additions felt especially welcome, such as the power-up that removes debuffs. The many new modes add variety to the game, including an interesting mode where you must avoid various explosive fireworks while finishing the lap on time. While they’re nothing spectacular, they keep things fresh and add to the overall Beach Buggy Racing experience.

Finally, it’s worth noting that Beach Buggy Racing 2: Island Adventure includes a whole slew of additional features for its standard race mode. For example, you can alter each race’s rules. From how many racers there are, the number of laps in each race, the number of times a driver can use their ability and what power-ups can be used. While it may feel like a small inclusion, it’s worth noting that this is a feature completely absent from Mario Kart 8 Deluxe. The ability to alter rules is a very welcome feature. It not only allows for replayability but offers an additional challenge to those seeking it.

Additionally, Beach Buggy Racing 2: Island Adventures features three new types of “power-up bubbles”. There’s the standard bubble, the fast bubble and most notably, the double bubble. While Mario Kart 8 Deluxe also features a double-box that nets you two power-ups, in Beach Buggy Racing 2: Island Adventures, each power-up is tied to a specific button press. So, whereas in Mario Kart, both items have to be used up to access a new one, in this game, you can save one for later use while still using the new power-ups you accumulate throughout your run. It adds a nice layer of strategy to the proceedings and makes races that much more intriguing.

Beach Buggy Racing 2: Island Adventure is the definitive Beach Buggy Racing experience. It’s everything that was great about the first title, albeit sometimes a little too literally, and more. There are more maps, more characters, more modes, more abilities and power-ups and more mayhem. It’s an incredibly enjoyable kart racer with tightly refined controls and hectic gameplay. I haven’t even included everything present in the game in this review.

Each racer also has unique challenges that, once completed, nets them a new outfit. You can find unlockable cosmetics within races, and there’s the ability to have multi-event championships. It is astounding how much content is available in this game. It truly makes it a cut above the rest. For the low price, Beach Buggy Racing 2: Island Adventure is well worth your time and money.

*Disclaimer: Reviewed on PS4. The publisher provided the code. 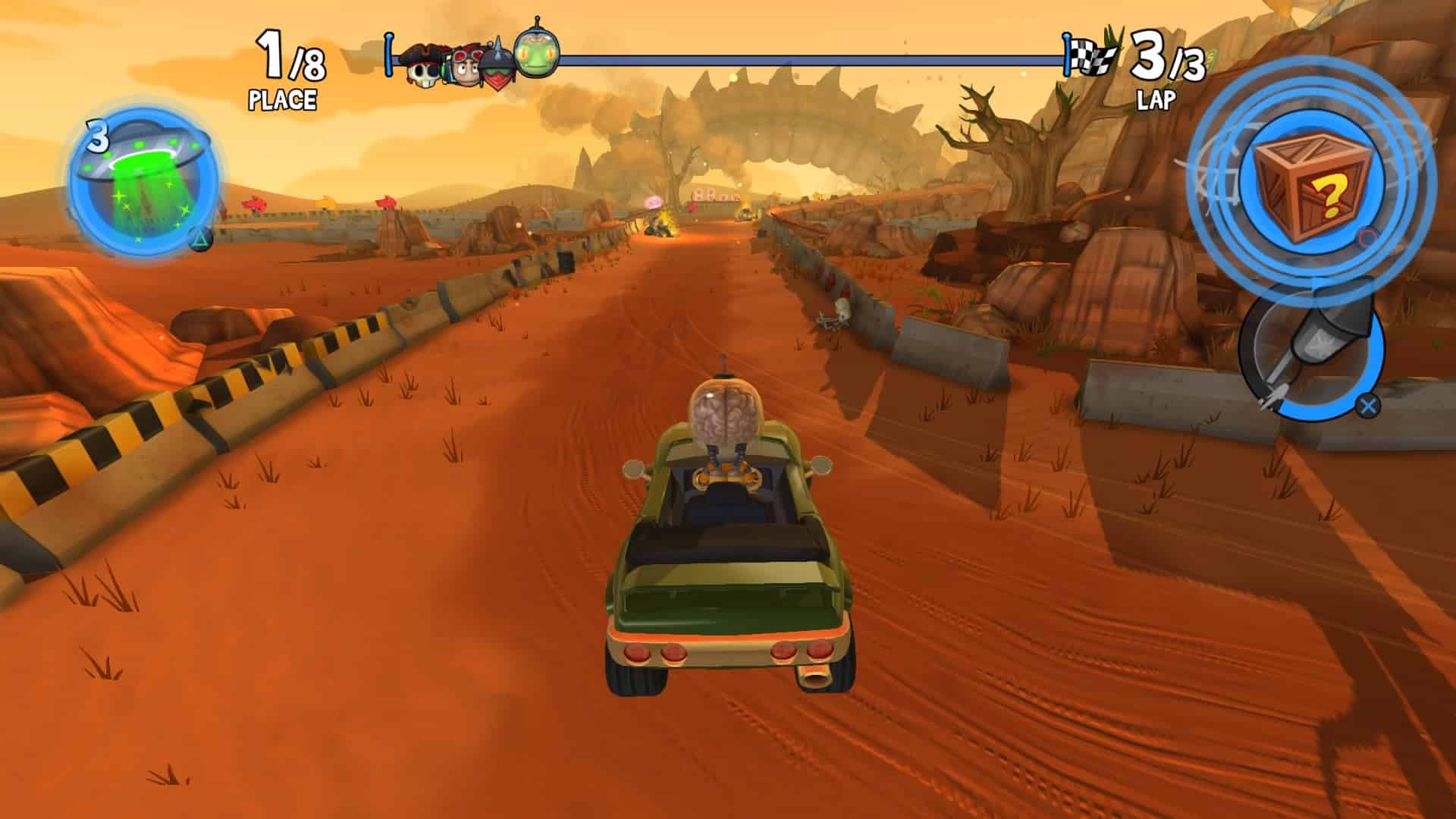