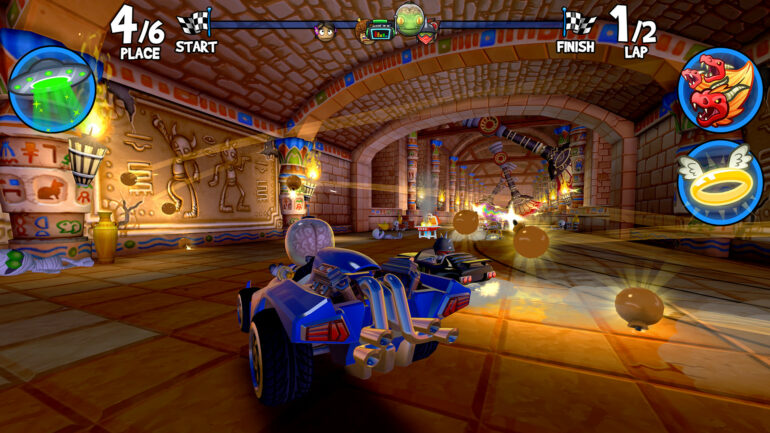 Beach Buggy Racing 2 Is Finally Coming To Consoles Next Week

Vector Unit has announced that the long-awaited sequels, Beach Buggy Racing 2: Island Adventure, is finally launching on Xbox One, PlayStation 4 and the Nintendo Switch next week.

Look, this one’s personal. Beach Buggy Racing was the game that got me through lockdown. Almost every single day, my brother and I would play it while I desperately tried to stave off those lockdown pounds. Somehow, despite playing it all the time, we never grew sick of it, and I still have fond memories of it to this day. So, when Vector Unit announced that a sequel was dropping, I jumped at the opportunity to cover it. This is going to be a bigger and better sequel with more power-ups, maps and characters.

Beach Buggy Racing 2: Island Adventure is much more than just an absolute mouthful to say. It’s an upcoming kart racing game with a whole slew of features. You’ll be able to play it entirely by yourself, or with up to three other friends in four-player-split-screen. It will feature a colourful cast of characters, a campaign mode, a bunch of new and innovative maps, alongside many other game modes. I’ll list everything that you can expect when it launches next week:

Beach Buggy Racing 2: Island Adventure will be launching on March 17th, 2021. It will cost $19.99 on consoles, but is currently available for pre-purchase on Xbox One and Switch with a 10% discount. You can head on over to its Steam page and get it right now if you don’t fancy waiting. It will have a 10% discount over there too until March 17th. Oh, and expect an article all about why Beach Buggy Racing 2: Island Adventure is better than Mario Kart. It’s coming soon.