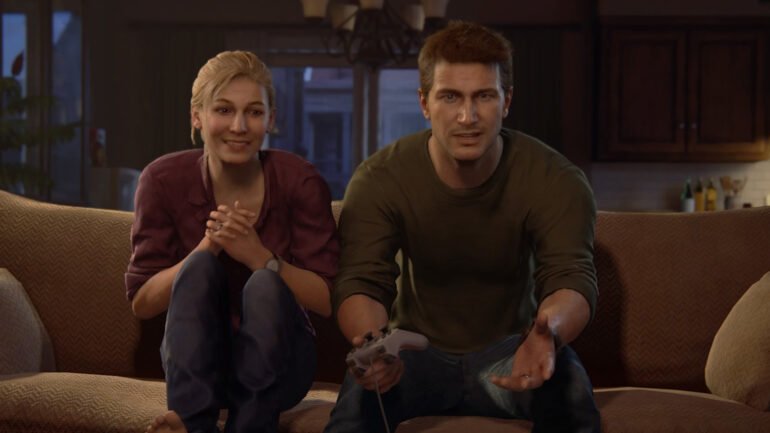 I find myself longing for co-op and feeling more and more alone the longer the pandemic continues to rampage across the globe. To make myself feel comforted by the presence of others, I switch the TV on, turn the volume up, and nestle up nicely in bed with my eyes glued to my Nintendo Switch’s scuffed screen. And yet, this doesn’t feel like enough.

Over the first UK lockdown, I played through a whole heap of games; Greedfall, Far Cry 5, Journey, and Death Stranding were some standouts. But no matter how many hours I sunk into their vibrant, deadly, and at times peaceful and evocative worlds, I couldn’t shake the feeling that it was a very lonely experience.

With the sudden craze for co-op games like Phasmophobia, Fall Guys, and Among Us, it’s easy to see how the internet, and our connection with others over it, has helped soothe us throughout the pandemic. Zoom, Teams, (Skype even), all of these online tools seem like God-sends to us during what could have been the loneliest year of our lives. In essence, having had the internet potentially saved a lot of us from cabin fever.

Two of the stand-out games I played during the lockdown, Death Stranding and Journey, utilize online-connection to make their worlds feel more lived in. They give the player a genuine sense of connection to others without the need for microphones, or even a real face to face connection.

In Death Stranding, you can interact with things left behind by other players during their playthroughs, and leave things for them. You can donate resources to the construction of roads and bridges which will benefit everyone who exists within that instance of Death Stranding, and they can donate resources to your constructions. I won’t forget the countless times I was staggering through Death Stranding’s unforgiving world, my character hanging on by the thinnest of threads, only to find a rope, bridge, or ladder left behind by another player making my road to safety that much easier. It offered a genuine sense of elation.

And yet, despite Death Stranding’s high production value, I think of a lesser-known game which I played almost every single day with my brother while I desperately tried to burn off those lockdown-pounds: Beach Buggy Racing. A couch co-op game where an alien called B-Zorp and a bro called Beach Bro race around a volcano while flying bats blow up your cars and send you flying across the map.

Death Stranding offers an intricate form of connection that’s both mechanically engaging, but also symbolically meaningful. It’s a beautiful mechanic that compliments an already incredible game. But in reality, it’s lonely and fleeting.

It reminds me of a Japanese term, mono no aware. It’s a term that encapsulates the sadness one feels at the fleeting nature of all things, the awareness of the impermanence of life. I’ve experienced this a lot recently, saddened by the realization that nothing truly lasts forever. As much as we like to believe it, even on the internet, nothing lasts forever.

“No Man Ever Steps In The Same River Twice”

Death Stranding’s online component is great, but it’s not forever. One day, I’ll log in, and there won’t be a ladder waiting for me, a bridge with a goofy hologram from Horizon Zero Dawn ruining my immersion, but making me laugh a little. Those people I played with initially, the one’s I didn’t see but felt their presence, I’ll likely never play with them again. Our brief relationship was yet another fleeting moment in my already short life. Even our time together was ultimately nothing more than symbolic of the distance an online connection truly holds. Our real lives, our real selves, masked behind fake names and pictures of fictional characters.

I tried playing online games that we’re more interactive, where you could play with friends and family. I played Fortnite, Warframe, and even COD. But once the screen faded, once the silence permeated my room, I remembered that it, life, the immaterial nature of the digital world, is fleeting. I longed for a physical presence, for a meaningful interaction where I could turn to the person I was playing with, see them by my side, hear their laughter echo around my room, and know it wasn’t a digital reproduction of laughter happening far far away. I longed for couch co-op.

If lockdown has taught me anything it’s that video games, as much as they may transport you to other worlds, offer you an insight into other’s lives, and connect people from all across the world in what would have seemed impossible in the days of Pong and Tetris, they should really be played together, side by side, a slice of greasy pizza in one hand, a grubby controller in the other, and tears rolling from your eyes from all the laughter. Having that physical presence will always trump online gaming. Because once it’s over and you turn the TV off, they’re still there, and they’re still laughing.

In several countries around the world right now, life sort of sucks. We can’t be with our friends or have the co-op interaction I’m writing about. But hopefully soon, when it’s all over, and we can finally meet in person, closer than six feet, sit with one another on our stained couches, our eyes glued to the screen as B-Zorp and Beach Bro whizz around the map, we can finally experience the bliss of split-screen co-op, and forget all about the sadness of our fleeting lives and instead revel in the fun, childlike wonder of gaming together. Really together.