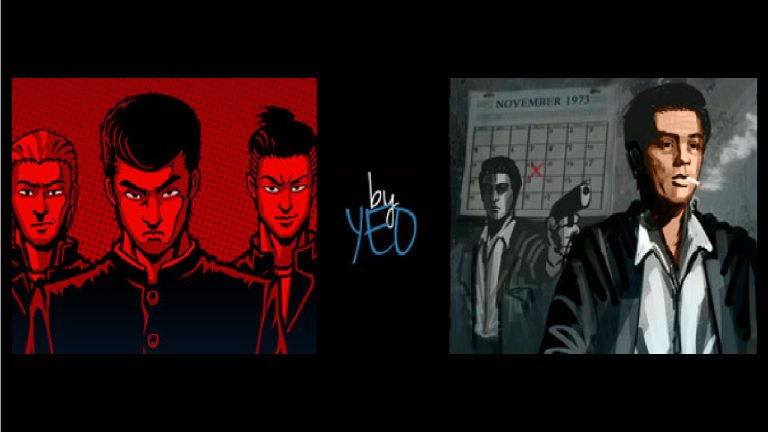 My mum told me this story once when we were driving, of how she had, in her youth, tried sending letters to her favourite author. To her dismay, she received no response. I had no such problem in 2021, as Yeo, the man behind The Friends of Ringo Ishikawa, and the recent Arrest of a Stone Buddha, replied to my tweet requesting an interview with a cool “Sure, why not?”. He oozes with the charm from his games; a cool, collected, thoughtful man who I knew almost immediately warranted the title I have thrust upon him – my hero.

Like all good game developers, Yeo was born to play games; a gamer since the age of five, it would seem he’s had every console under the sun. “We had ZX Spectrum, then it was NES, Sega Genesis, PS, Dreamcast, PS2, Nintendo DS, Xbox 360, PS3, Nintendo Switch and PS4” he lists confidently as if each one had important moments from his childhood locked away within.

Unsurprisingly for such an incredibly well-versed game developer, games mean so much more to him than simply ways of passing the time. “In my youth games were like miracles, like doors to other worlds” a sentiment shared by many, but never said before with such fervour.

Games played important roles during crucial stages of his life, whether it was selling them with his friends out of their own little game store at 17, or finally finishing Crisis Core: Final Fantasy VII, setting down the controller and having had the transformative experience of living through, for him, the “greatest moment in a video game history”. But of course, most importantly, they led him to where he is today, an important and up and coming game developer with two incredible games already under his belt.

“I don’t believe in motivation, I believe in discipline. That’s how I was raised”

As a game developer, Yeo had humble beginnings. “Before Ringo, I was making little games for local jams and I was always working on Nekketsu fan games”, something that comes as no surprise to those who are fans of the Kunio-kun games, an influential series that formed the basis of “Ryuichi no Blues”, or as we know it now, The Friends of Ringo Ishikawa.

Yeo takes his game development very seriously. From small game jams to the production of his indie titles, he has continuously been developing. “I don’t believe in motivation, I believe in discipline. That’s how I was raised” something that is evident as his games are often flawless pieces of art that clearly encapsulate his determination and discipline.

Yeo works four-hour days, and closer to the release of a title, sometimes even fifteen-hour days. But for Yeo, it’s not a chore, and he recollects fondly how he’s “had fun all the one and a half years [he] was making Arrest of a Stone Buddha”.

“I was a delinquent, a boxer, a gambling addict, I betrayed and was betrayed”

Yeo’s unfiltered and honest responses came into full effect when he suddenly said, “I was a delinquent, a boxer, a gambling addict, I betrayed and was betrayed”. Yeo, it would seem, has had a complex life, but for him, it is all just experience he can feed right back into his games. He tells me how he believes “that every work of every author is just a mirror for the author”, that every character reflects, in some way, the author who created them. For Yeo, that couldn’t be more true, as he says “I don’t lie to players. I try to tell only things I know.”

His experience-rich life, whether it is his youth playing games or his more complicated adolescence, has allowed him to create relatable characters such as Ringo. Yeo believes people can relate to Ringo because “most of us were at a crossroads in this point of life and didn’t know what to do and how to live” which speaks volumes about himself and is likely true about many others. “I know how the character feels, and I want players to feel the same”. It is moments like these from our conversation that make it clear, for Yeo, it is important that people understand his game, and perhaps even have a transformative experience as a result.

Eventually, a creative person’s worst nightmare rears its ugly head as the reviews creep their way in. “I don’t see any point and help in critique actually, it just makes you sad after reading bad reviews”, Yeo says, his sadness evident in his words. Recently, Yeo has been having a rough time of it and has expressed concerns over people messaging him with criticisms of his game on Twitter. After having put in so much work, love, and discipline into a piece of art, it’s difficult to have people lambast you with unhelpful critique.

“I think authors should make games for themselves. They should make them like every player is the author himself”

With Arrest of a Stone Buddha’s launch came more criticism, especially now that Yeo is becoming increasingly more prominent in the public eye. While he would rather everyone loved his games, when we spoke, he told me “My games are not supposed to be loved by everybody, so I’m ok if somebody doesn’t like it.” For Yeo, making a game isn’t about pleasing everyone else; it’s about making something he’ll enjoy. “I think authors should make games for themselves. They should make them like every player is the author himself,” he tells me, and I believe, deep down, he means it.

Yeo is human, just like the rest of us; he doesn’t watch horror films because they scare him, so it comes as no surprise that he hates reviews. They’re the scariest thing out there for someone who loves what they do as much as Yeo does.

“Arrest of a Stone Buddha has failed for now,” he tells me, and I’m honestly devastated to hear it. But Yeo tells me he doesn’t mind, and maybe, deep down, he really doesn’t. He’s embracing that discipline and moving on with a new project, something he says with enthusiasm “might turn out to be anything.”

Yeo: The Delinquent Behind The Screen

Yeo is my hero, not just because he makes incredible games, games that have positively impacted my life, but because, behind the curtain, behind these beautifully crafted games, lies a man who I can relate to, just as I do with Ringo. There’s something Yeo said to me about his games which I found to be a lovely sentiment. He said, “if you really and honestly like it yourself, there’ll be others who like it.” Well, Yeo, I think you may just be right.