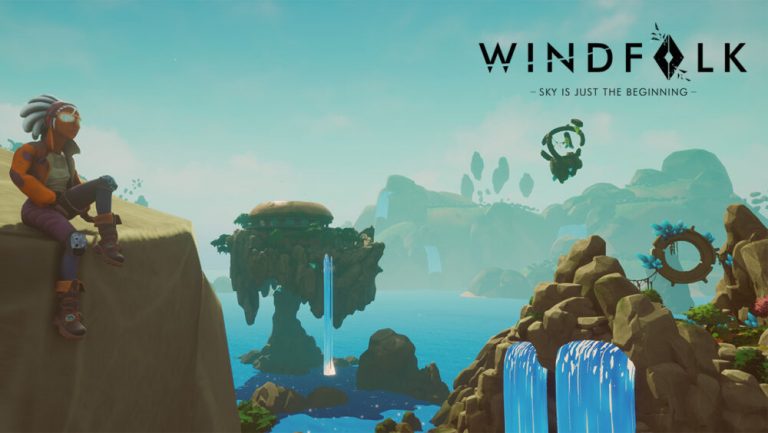 Windfolk caught my attention the moment I saw the trailer. Its lavish world seemed to ooze with character as the camera swept across its colourful landscapes. Its soaring soundtrack filled me with anticipation as the protagonist flew about on her jetpack, dashing from cliff-face to cliff-face in an instant. As I waited for the game to download, I quite literally shook with excitement. I went into Windfolk rearing to go, but unfortunately, I finished it a little disappointed.

“You play as Esen, a badass, jetpack riding, woman.”

Windfolk is like watching a Saturday morning cartoon. It’s exciting, exhilarating, filled with an oxymoronic combination of overly bombastic action and heartfelt emotion, and it ends far too soon, leaving you with little else to do than finish your chores.

You play as Esen, a badass, jetpack riding, woman whose hair barely catches up with her as she soars across the ebbing sea, and jagged mountainscapes at breakneck speeds. It’s your job to take down the Coalition, a nefarious organisation that had, at one point, captured Esen and held her hostage in one of their laboratories.

“Whenever you participate in a race-against-the-clock style mission, it’s intoxicating, addictive even.”

Windfolk would be a pretty standard third-person shooter if it weren’t for its excellent aerial mechanics. Swooping through the large open environments is unbelievably fun and by far the most polished mechanic in the game. You can clear serious ground in just a few seconds, flying high into the sky one moment, before plummeting down toward the sea the next. You let yourself fall for just a second, feeling the wind in your hair as you hear the sea growing closer and closer. And then, at the last second, you reel yourself back up, and you’re picking up momentum once again.

Whenever the main storyline, which consists of eight missions and a tutorial, has you participate in a race-against-the-clock style mission, it’s intoxicating, addictive even. There are collectible journal notes scattered across the various mission locations, so I’d often take a minute or two to explore the stunning landscapes and see what I could find. When you’re not doing the main story, there’s an arcade mode, which sees you compete in combat and racing trails. There’s seven of these, each with tiers to complete, so if you really get into the flying, there’s plenty more for you.

“Combat in Windfolk is a fairly simple affair.”

Unfortunately, when you’re not flying, the game isn’t as great. That’s not to say it’s bad. It just doesn’t feel as polished. For all the moments I found myself screaming “Wooo!” as I swept past a mountainside, relishing in the sense of nostalgia I got from it, there were many when I felt a little deflated.

Combat in Windfolk is a relatively simple affair. Whenever combat ensues, you’re cut off from the rest of the map, confined to a small space until the engagement concludes. You have a choice of three weapons (once you’ve unlocked them all), all of which have a unique primary mode and a secondary ability. There’s a standard machine gun, which can unleash a powerful blast if you activate its ability before the gun overheats. A chargeable energy weapon can also be used, and when charged enough times, releases a projectile that bounces from enemy to enemy. Finally, you can use a rocket launcher, which fires a ball of energy, that attacks enemies on sight.

When using any of these three weapons, you’re given a generous reticle that automatically attacks enemies when you press the trigger. This helps, as often you’ll be dashing or dodging, and trying to aim accurately would be a nightmare considering how Esen moves so quickly. There are fairly standard abilities to go alongside the weapons. There’s a shield, a teleporting ability, and a magnet type ability that draws all enemies towards a specific point. Again, these are unlocked over the course of the story mode.

“Even when all was fine and dandy, enemies were prone to just hovering and doing little else.”

For the most part, combat is adequate, albeit a little buggy. The machine gun works fine most of the time, but the other two are almost unusable. Holding down the trigger will often result in nothing happening, forcing you to let go and press again. Whenever I’d dodge while using either the energy weapon or the rocket launcher, pressing the trigger immediately afterwards didn’t work.

When using the energy gun, a gun that needs to be charged consecutively to use its ability, it would often not shoot after the first shot if I held the trigger down, thus losing its first charge. Even when all was fine and dandy, enemies were prone to just hovering and doing little else. A sniper-type enemy that shot fairly frequently required you to correctly time your dodge to avoid their attacks. But the standard enemies would rarely fire, meaning if it was just me and one or two of them left, I could stand there and wait, and they’d never shoot.

Outside of combat, there were occasional bugs. I got stuck inside a building at one point, but I managed to worm my way out of it. In one mission where I had to fight a plane, it took a route that should have been inaccessible to me, but that I could take anyway. This meant I was technically in the out-of-bounds area, so I couldn’t get back into the main mission location. Whenever I’d die against one of the four bosses, the music wouldn’t resume upon restarting the fight, meaning it would be complete silence, except for the noises of my jetpack and guns.

Super Rare Games Have Launched A Publishing Label With 5 Indies

“Its locations are fantastical, and even evoke imagery akin to Lord of the Rings, Avatar, and Star Wars.”

In all honesty, this is no Cyberpunk 2077, and the bugs that I experienced were little more than immersion breaking at best. I’m happily willing to give this game’s technical flaws a pass because of its myriad of achievements.

For one, Windfolk looks absolutely gorgeous. There are three primary locations in the game, with each area getting two or three missions assigned to it. They’re all as equally unique and striking as the next, which at times makes the game’s world feel genuinely believable. Its locations are fantastical, colourful, beautifully laid out for the optimum flying experience, and at times cinematic, even evoking imagery akin to Lord of the Rings, Avatar, and Star Wars.

All of this beauty is complemented by an incredible score. It can drive home the epic scale of a mission or the fantastic qualities of a location. In one mission, you must desperately escape as Coalition forces pursue you. You have to dash from ring to ring as missiles and bullets whizz by you, exploding just a few inches away from your face. You can almost feel the heat radiate against your face as the screen shakes, and your jetpack rattles away as you push it to its maximum speed. All of this action is accompanied by a bombastic, elating score that makes both the desperation and the combat that much more grand.

“Just as I was getting into Windfolk, it was over.”

And yet, all this mesmerising beauty, exhilarating aerial exploration, and a sweeping score last for little more than two or three hours. And this is where Windfolk disappoints.

Just as I was getting into Windfolk, as it gave me more and more toys to play with, more locations to explore, and ramped the story up to an intriguing degree, it was over. And while the end teases that there’s more in store, that “the sky is just the beginning”, I was there, scratching my head asking “Well, can I have that now please?”. Sure, there’s the arcade mode, but it’s only 7 missions, and I feel like even with that, the short story mode, and a free-roam mode (which doesn’t exist, at least currently), it still wouldn’t be enough.

It’s not that what you get for the low price, is bad, or not worth the money; it just left me wanting more. It’s a testament to Windfolk’s captivating gameplay, style, and narrative that I wanted to play more. Alas, this is a short experience, one that may certainly warrant playing through a second or even third time, but one that leaves a lot to be desired once it’s over. 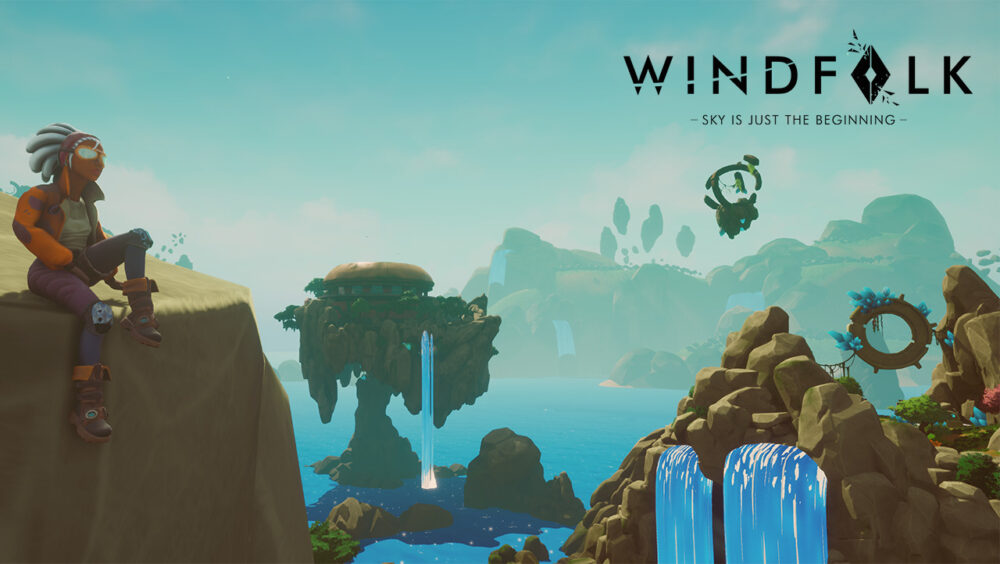