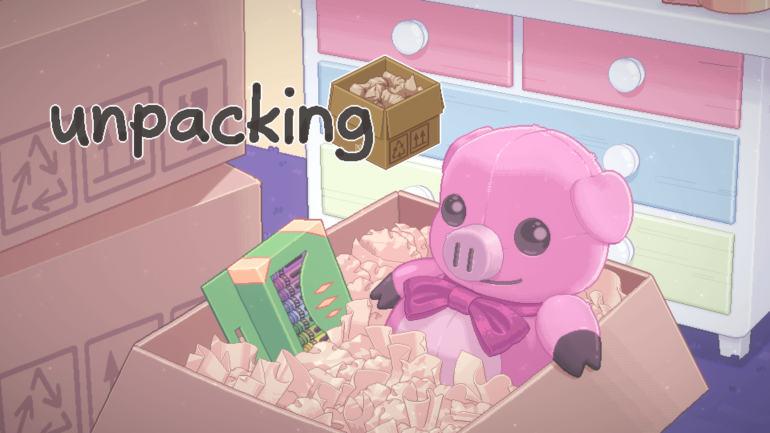 Unpacking: Moving Has Never Been So Relaxing – Demo Preview

I’m moving house by the end of the week, so given the opportunity to try out Unpacking’s demo at this year’s LudoNarraCon seemed like a no brainer. Maybe I could pick up some tips? Maybe it would help me deal with the stress that will consume me when I move? Well, I’m more than happy to say that Unpacking did both of those things and more.

“It’s a sight to behold once everything is unpacked, and I found myself feeling oddly proud”

Unpacking is an incredibly simple game. You’re given a series of small rooms and must unpack and organise various knick-knacks and household items across them. While you’re given some leeway on what goes where, certain items seemed to have a set place in which they must be positioned. For the most part this simple, albeit incredibly relaxing gameplay, is a lot of fun. It takes what is traditionally a rather stressful endeavour, and turns it into something I want to do repeatedly.

While games have tackled moving out in the past, such as the aptly named Moving Out, they have never done so with such detail and serenity. There’s a lot of items to unpack in Unpacking’s demo, from pots and pans to bras and Rubik’s Cubes. Each item is brought to life through Unpacking’s incredible pixel art. There’s so much detail within each location, even without considering the items you’re tasked with unpacking. It’s a sight to behold once everything is unpacked, and I found myself feeling oddly proud at what amounted to a rather mundane room.

“I am in love with Unpacking, and cannot wait until I can get my hands on the full release”

While the demo only includes two locations to unpack, a narrative of sorts builds between each location. While no words are spoken, or cutscenes delivered, several items make their way across, alongside new ones. It tells a story not through exposition or dialogue, but through the items you lovingly arrange. It’s a really neat and refreshing way of delivering a surprisingly touching story.

The music and sound design of Unpacking help create a relaxed and serene atmosphere too. It makes the whole ordeal feel rather calming. I found myself whistling along to the music as I unpacked items and allocated them to the various cabinets and spaces around the rooms.

I’m amazed at how much there is to like in Unpacking. It’s a simple game about literally unpacking and organising a room, and yet it’s amazingly a lot of fun. The calm and serene nature of its gameplay loop is incredibly satisfying, and the gorgeous art style complements this. I am in love with Unpacking, and cannot wait until I can get my hands on the full release, and unpack the remainder of the rooms.

Be sure to head on over to Unpacking’s Steam store page to try the demo out for yourself. You can also wishlist it on Steam to be notified of any future updates.

We’ll Always Have Paris: A Masterclass In Storytelling – PC Review