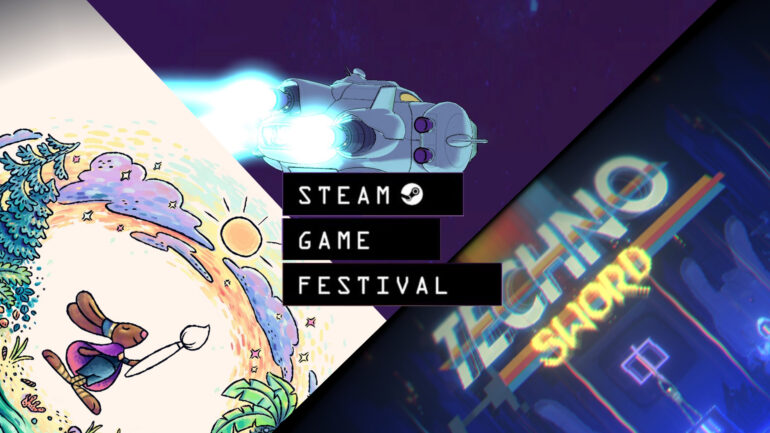 Spring is right around the corner. The days are getting longer, the sun is shining brighter, the flowers finally feel like blossoming, and my mood is a little bit better. Most importantly, however, The Steam Game Festival is here to unload a whole bunch of intriguing demos, prologues, and previews of upcoming indie-titles. I’m always very grateful when Steam hosts these. They’re filled with so many enjoyable streams, Q&As, demos, and more to get stuck into. They’re also a nice celebration of all the infinitely talented indie developers out there! So, I figured I’d play a couple of the best-looking demos and, in no particular order, share my initial impressions. Without further ado, let’s get on with it.

I love, love, LOVE this! Oh my word! Chicory: A Colourful Tale is an amazing, narrative-driven puzzle adventure title about a world that’s lost its colour. The narrative starts by informing us that traditionally someone would be wielding a powerful magical brush that brings life and colour to the world. However, as you are cleaning their room, the world turns black and white and they are nowhere to be seen!

The demo that I played was no longer than 20 minutes. There were a few bits and bobs that I missed and will definitely be going back for. You can explore a gorgeously hand-drawn world all while dragging your brush around, painting the place however you feel like. In the demo, there were only a few colours to choose from. I’m sure in the full release this will be expanded upon. At the very end of the demo, it’s teased that your paint will glow in the dark, so I’m sure as you progress through the main game you’ll unlock various new abilities and colours to use with your brush.

The brush is used for more than just painting your name in the sky, it is used for some light puzzling. There were secrets hidden across the map, all of which were obtainable if you utilised the brush correctly. Paint a certain tree and it’ll return to a sapling, but remove the paint and it’ll sprout back up. There were also mushrooms that can be painted to turn into giant springy mushrooms. I’m sure in the main game there will be more things dotted around the world that you can interact with.

“I think, most of all, I loved the overall cuteness of the game.”

There was even a boss-battle of sorts towards the end which I found to be a welcome change of pace. It was fun bouncing between a more chilled out atmosphere while exploring and solving puzzles, to the faster-passed, and darker in tone story beats.

I think, most of all, I loved the overall cuteness of the game. From its delightfully wonderful art style to its upbeat soundtrack, this is a really calming and chill game, even despite its mysterious and dark narrative. I found myself chilling out and painting the world as I would a colouring book, all while being engrossed in the story and where it was going. It’s a really neat way of having the player interact with the world in a meaningful way, but that doesn’t detract from the overall experience. It’s like in Death Stranding where you could pick up parcels on route to your next objective and deposit them when you got there. I really enjoyed it!

Chicory: A Colourful Tale is absolutely worth checking out over on the Steam Game Festival. Should it tickle your fancy, wishlist it, and try out its demo!

A Long Journey To An Uncertain End

I was a little worried before playing this. A Long Journey To An Uncertain End is the very first game I’ve ever helped fund, and I did so without even trying the demo. I was so convinced by its concept, that I didn’t feel the need to try it. Instead, I had blind faith in the project, hope that it would turn out as advertised. Well, if the demo is anything to go by, it absolutely, 100% has.

A Long Journey To An Uncertain End is phenomenal! It’s a narrative-driven sci-fi game in which you must manage your supplies and fuel in order to outrun your ex. From the get-go you’re thrust into this game’s universe, the fantastic orchestral theme playing as the main menu opens up. It tells you from the moment you start you’re in for a planet-hopping adventure across the stars.

“Somehow, they’ve made textboxes feel evocative and vivid. They made me smile, laugh, and even cry a little.”

The writing in this game is incredible. It weaves a whole bunch of exposition, mechanics, narratives, and character depth seamlessly and with so much grace. Throughout the whole demo, I felt completely immersed, consistently engaged as I played, enthralled by every character and moment. The writers have done a phenomenal job of creating a believable and fully-realised universe and creating a cast of characters that I love and want to spend time with.

Somehow, they’ve made textboxes feel evocative and vivid. They made me smile, laugh, and even cry a little. They tell a story about the reality of love, the fact that it’s not as monochromatic as we’re lead to believe, through a cast of characters from all walks of life. I loved the diversity of the cast. The fact you can choose your own gender pronouns and body type from the get-go is amazing! I especially loved that none of the diversity feels forced. Instead, it feels like a part of that universe, a natural part of life, as it should in our own world.

I cannot wait to see more of this game and play it when it eventually launches. I thoroughly recommend you check out the demo over on the Steam Game Festival, and help fund it over on their Kickstarter page!

Narita Boy is everything I hoped it would be and more. It’s got a killer soundtrack, probably the best pixel art I’ve ever seen, fluid combat, and an overly-complicated narrative that I love. I’m tempted to leave it there, hesitant to spoil the experience for you, as I highly recommend you go and enjoy this one for yourselves. But I’ll go on if only so I can lavish this game in further compliments a little longer.

Narita Boy is an exceptionally stylish game. From its visuals, combat, and soundtrack, everything oozes with a layer of detail and pure style that I’ve never really seen in anything else. It is wholly unique in its vision of a digital world. It’s a neon-soaked, blue-tinted nightmare of flashing lights, techno-babble, religious undertones, and an aggregation of wires. Playing this game was a visual-treat the whole way through. New ideas and visual gimmicks were constantly being thrown at me. The distinctiveness and creativity of the world constantly one-upping itself to the point that I was in disbelief at how consistently it was sustaining the joy of exploration.

Combat was insanely good too. The fluidity in every animation makes fighting the ghoulish creatures incredibly enjoyable. Watching as Narita Boy slices through them with ease, or blasts them away with his shotgun was very satisfying. It also helps that this game has the best battle theme I’ve ever heard; an incredibly dark, evocative, and powerful piece of synthwave that made me constantly want to fight things just so I could hear it.

“I think the narrative itself is simple enough that all the complexity just adds a layer of depth to the world as opposed to confuddling the story.”

The demo was fairly lengthy and really introduces you to its narrative and themes. I thought I used a lot of flowery language in my articles, but oh boy does Narita Boy have me beat. The language is so over-the-top that I love it. It’s complicated, but I think the narrative itself is simple enough that all the complexity just adds a layer of depth to the world as opposed to confuddling the story. I really enjoyed the religious undertones the game had going for it, and I got fully committed to the world. I was completely engrossed by the story and wanted to uncover more of its secrets.

The only let down for me was the platforming. For the most part, it’s smooth and just as fluid as the combat. Unfortunately, there were times when I’d try and make a jump, but Narita Boy would just fall off the edge like a suicidal Smash Bros fighter. It takes some getting used to, but I’m sure it’ll be refined before the game is launched. Ultimately, I don’t think it detracted from the exploration at all. If anything, the added verticality gave a lot of depth to the more exploration-based segments.

I highly recommend you check out Narita Boy if only to gaze upon the sheer quality and beauty of its pixel art and crazy world! I loved every second with this game and will be picking it up the day it launches! You can play its demo during the Steam Game Festival, and wishlist it over on its Steam store page once you’re done!

The End Of The Festivities

There were some genuinely great demos on offer over the course of the Steam Game Festival. There were many that I didn’t get to try and some that were too short to write about. Honorable mentions include The Song of the Fae and Rise Eterna which are both great, albeit slightly flawed tactical games. There is also A Space For The Unbound which I insist you try! I highly recommend trying all of the games mentioned in this article, as well as the many others over on Steam. If anything, The Steam Game Festival shows us that a lot of talent and creativity is going to come out of 2021, and I am very much looking forward to it.