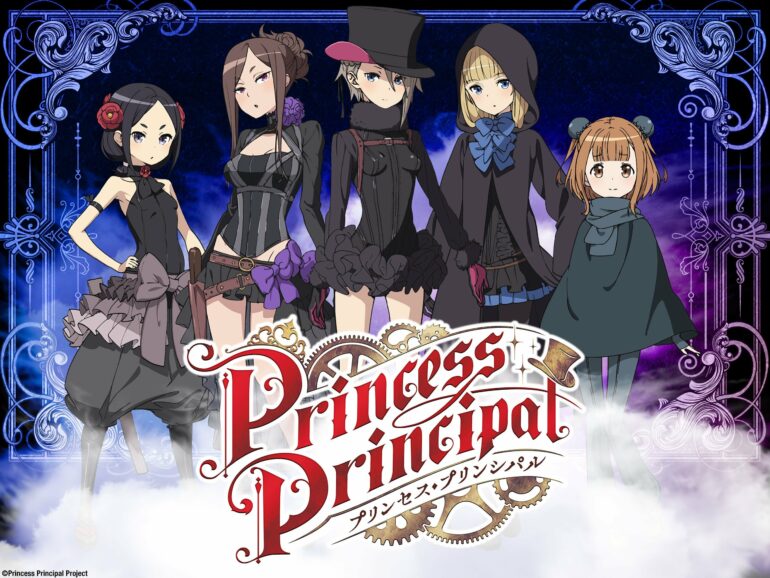 In the late 1900s, the discovery of a new mineral in London led to conflict The Kingdom of Albion has been split in two by a massive wall separating the east and west. The tension between the Commonwealth and the monarchy wears thin, and both sides have spies infiltrating the other. Princess Principal follows five of those spies and documents their missions to infiltrate the nobility and keep the peace. These girls are highly trained artists of espionage and will stop at nothing to complete their missions.

Princess Principle’s first episode does an excellent job of setting the tone. We, as the audience, are given very little information compared to what the spies know. We are put in the shoes of the man the girls are helping escape and we are just as surprised as him when it turns out the girls were aware of his betrayal the whole time. This all leads to one of my favourite scenes in the show where Ange explains that everything she said to the man was a lie before he asks if she is going to kill him. With almost no hesitation she says no, then proceeds to murder him an instant later. This not only establishes Ange as a pathological liar but also sets the stakes of what the show is willing to do.

“Writing rootable characters who are consistently dishonest is a challenge in its own right.”

The next two episodes show the girls first few missions, turning back the clock and giving us a lot more insight into our main cast. This choice fits perfectly as it humanises these characters right after we have seen what they are capable of. It also works well because, at the start of episode two, we are told that Ange and Dorothy’s mission is to kill and replace the princess but since we are pretty sure she is alive thanks to episode one, it makes you wonder how things will play out. The twist could feel forced if done differently but thanks to the notion that the show has already lied to us once before, the suspense is never broken.

Writingrootable characters who are consistently dishonest is a challenge in its own right. Princess Principle establishes compelling characters but does a lot less to humanise them and most of that illusion is shattered by the episode’s end. That’s why in episodes two and three, the show spends so much time giving us reason to like these characters. All of them have ‘stand out’ traits and personalities that make them valuable to the team. The icing on the cake is at the end of episode two where we are teased with more info about Ange and Princess’s prior relationship.

Beatrice: cutest character design, quirky ability, voice changer is a game-changer earnest personality, tragic backstory
Dorothy: extremely capable, fun-loving party gal, the straight man to the other girl’s chaotic tendencies, tragic things happen during the show story
Ange: most complex character, pathological lying makes her stand out, most clearly defined arc, tragic backstory
Princess: incredible work ethic, the glue that holds the team together, tragic backstory
Chise: Has the least amount of screen time but still leaves an impact, stands out due to her Japanese aesthetic, is able to give a unique perspective due to being a foreigner.

Princess Principal seamlessly blends undercover espionage with character-driven goodness. The world-building and character design bring this late 1900s world to life and the steampunk aesthetic gives the show its own unique flair helping it to stand out even further. The colourful art style, beautiful animation and fight choreography push the show even further into my favourites. It’s all tied together by a non-linear story structure that conveys a strong narrative with some great surprises. The only thing keeping Princess Principal from a ten is the lack of a completely satisfying conclusion. Hopefully, the movies can fill that hole.