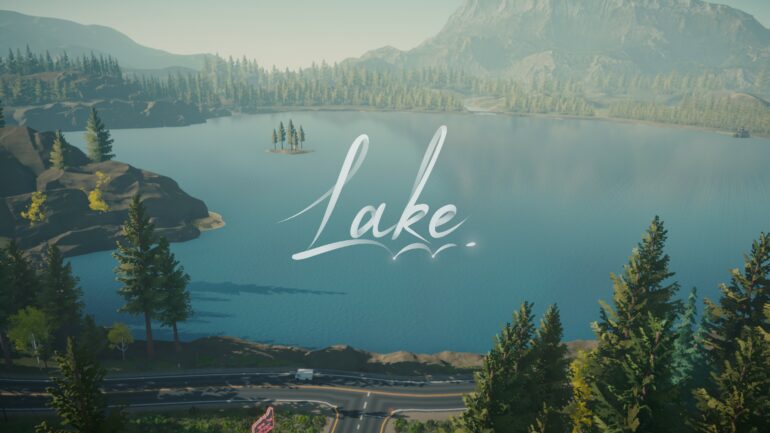 I’ve been hotly anticipating Lake since it was announced a while back. There is something incredibly appealing about the mundane in video games. Whether it’s unpacking boxes or delivering post, I find myself drawn to them every day. It is therefore understandable that I’d be enormously enthused by Lake’s premise. This is a game in which you must literally deliver post in a sleepy American suburb. Fortunately, at this year’s LudoNarraCon, I got the chance to try out a demo. It was perhaps the best gaming experience I’ve had in a very, very long time.

“Lake is filled with a colourful cast of inhabitants that I cannot wait to get to know further.”

From the offset, it is clear that Lake is an outstanding visual marvel. The way the rising sun is cast across the waking town is mesmerising. I lavished at the opportunity to sit on a bench and watch as the town slowly came to life. Driving across creaky bridges surrounded by cascading waterfalls and a waving treeline is a truly atmospheric experience. This is all brought to life by Lake’s gorgeous graphical style. I couldn’t help but slow my truck to a crawl and watch as the sun broke through the branches of a towering tree as they waved in the soft breeze. Exploring Lake’s world and barrelling down the road watching as the world goes by is a lot of fun. However, I feel it is the quieter moments, such as standing by the lakeside and looking out across at the majestic mountainside, that truly drew me in.

When you’re not pondering life as the water glistens and trickles up the embankment, you’ll be delivering post to the eclectic cast of Providence Oaks residents. Players take on the role of Meredith, a woman who once lived in this sleepy suburb, but left twenty-two years ago for the big city. Lake carefully crafts the narrative around her fish-out-of-water attitude and introduces Meredith, and thus the player, to each character in a really succinct way. I found each and every one of them to be perfectly endearing in their own way, and they all have their various narratives set up within the first few times of meeting them. It’s a genuinely enthralling little town filled with a colourful cast of inhabitants that I cannot wait to get to know further.

“This is a truly one-of-a-kind experience.”

The thing about Lake’s gameplay is that it is supplemental to the overall narrative and atmosphere. Honestly, I’m more than fine with that. Driving around the lake is incredibly enjoyable, especially once you get access to the radio, and delivering people’s post is handled in a simplified yet refined way. What is special about it, however, is that it essentially instigates conversations with the local residents. Bringing a parcel to one of the characters wound up leading to a side mission in which I had to deliver a cupcake-fed cat to a bait salesman for a check-up. Another led me to meet an old acquaintance who was clearly not too pleased we hadn’t dropped by earlier. I love that the gameplay feeds directly into the narrative, and I haven’t seen it done this well since Death Stranding.

Lake is a truly one-of-a-kind experience. It’s most certainly not one I’ll forget any time soon. There’s something so soothingly relaxing about existing within its world, getting to know its characters, and deliver their mail. I always feel that games rarely meet the overly high expectations I set for them. But Lake somehow has managed to go beyond them. It is exactly as I imagined it would be and so much more. The only improvement I’d make: let me pet the cats.

Be sure to head on over to Lake’s Steam store page to try the demo out for yourself. You can also wishlist it on Steam to be notified of any future updates.