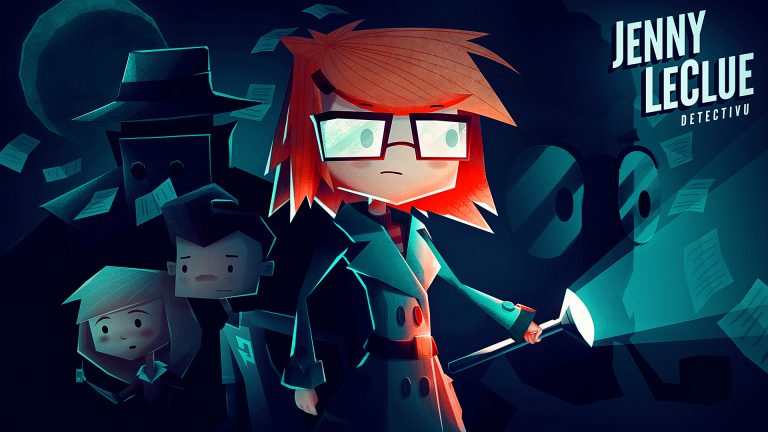 Jenny LeClue: Detectivú Should be the Next Game you play on Switch

Jenny LeClue: Detectivú fell under the radar for me despite positive press for this adventure game’s latest release in August on Nintendo Switch. Even without its recent 88% off sale on the Nintendo eShop, this stellar adventure game is well-worth its $25 price tag.

Originally kickstarted in 2014, Jenny LeClue: Detectivú is a narrative adventure game in the style of Oxenfree and Mutazione, with the charm and wittiness of LucasArts and Double Fine.

In this coming of age game, you play Jenny LeClue, a young aspiring detective, wanting to follow in the footsteps of her mother, a forensic scientist. The story is framed by the struggles of the author of Jenny LeClue’s adventures. After the insistence of his publishers, he begrudgingly adds some much-needed edge to his normally-saccharine mystery franchise. Bored by the sleepy small town of Arthurton, Jenny soon finds herself embroiled in the case of a lifetime; a murder and her mother is the main suspect.

Throughout Jenny’s journey for truth, we meet a variety of likable, flawed, and sometimes strange characters. Despite the dangers of her investigations, Jenny is more afraid to realize that even the greatest detectives need help and friends. Sinister forces are hiding in Arthurton, and Jenny will need all the help she can get to stay ahead of her mysterious pursuers to prove her mother innocent.

Unlike in traditional adventure games, players search clues, make deductions, and work out simple object puzzles without any frustrating item combination puzzles. This for better and worse as it keeps the narrative moving at a fast pace, but it lacks the joys of great puzzles while still often relying on them as a main source of interaction. The simplicity of puzzles starts to drag out the latter half of the game’s 8-hour runtime, where dialogue and interrogations grow sparser.

As a “choices matter” game (different dialogue and action choices will affect future events), the game gains some replayability while further investing players in the characters and world. Although, it is not clear how these choices will carry on to the next game which is teased in the credits.

Regardless of its challenge, I was drawn in by its entertaining dialogue and well-paced narrative. While it’s pulpy and sardonic, it has genuine moments where the characters open up and contradict tropey-first impressions. These moments not only make the characters relatable and charming but also make me buy into the world.

Oh, and have I mentioned the game’s beautiful lighting and mid-century art direction? Moody blues, and autumn oranges and reds, light up the unique and occasionally ominous locations across Arthurton. The angular and strongly shape-based character designs also show limited but bouncy and evocative animations. Before the game’s Switch launch, an update added voice for all dialogue and narration. These strong performances fill conversations and narration with even more character, and I can not even imagine the game without it.

Although Jenny LeClue: Detectivú’s overly-simplistic puzzles tend to drag down the latter half of the game, the thrilling narrative, engaging characters, unique look, and meaningful choices make it an easy recommendation for everyone. The Switch version also includes touchscreen capabilities adding to the game’s accessibility for all ages and experiences. There are some instances of language and intense themes that might not be suitable for very young children. For everyone else, pick up this game, sit back, and enjoy the ride.