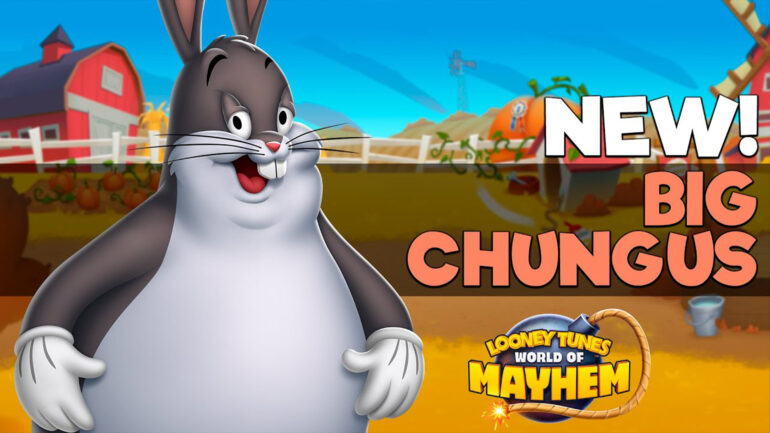 Looney Tunes World of Mayhem is a 2018 gacha mobile game with battle mechanics consisting of obtaining rare characters from the Looney Tunes universe and making them fight against each other. You can check the trailer out here.

Big Chungus’ origins are as ‘‘internet moment’’ as possible. The story dates back to December 1941, when Warner Bros. released Wabbit Twouble starring Bugs Bunny. For comedic purposes, the movie depicted Elmer as a fat version of himself a few times. This prompted Bugs Bunny to mock him by mimicking his appearance. That particular image of a fat Bugs Bunny turned into an internet meme in 2018.

According to Urban Dictionary, the definition of Chungus is ‘‘an overweight, giant, earth-destroying, god killing rabbit.’’ Initially, video game commentator, Jim Sterling, coined the word for comedic effect. Little did he know, it would become bigger than he ever thought. In 2018, the picture above would be found on the internet and transformed into a meme after a GameStop manager wrote a Facebook post about a customer’s peculiar request.

Allegedly, a mother wished to purchase the game Big Chungus for her son. Of course, there was no such game, but there was cover art featuring the fat Bugs Bunny circulating on the internet, which might explain the mother’s confusion. The Facebook post of the incident went viral and popularised Big Chungus into the mainstream of meme culture.

Few could have ever predicted that a fat Bugs Bunny from a 1941 Looney Tunes movie would eventually become a full-fledged character in an official Looney Tunes game. Still, with its newest addition, Big Chungus is now part of the Looney Tunes canon.

What do you think about this new addition? Let us know in the comments below!