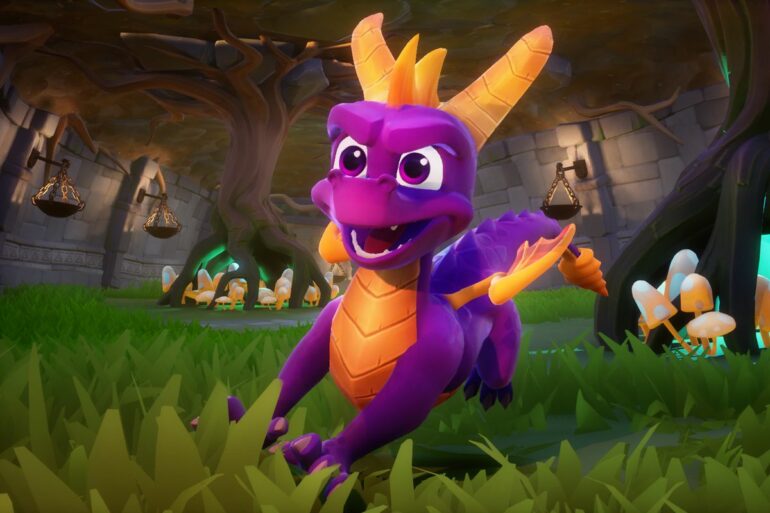 8 Things We Want From A New Spyro Game

We’ve seen a resurgence in old school PlayStation mascots with smash hits like Crash Bandicoot and Medievil getting remakes and even sequels in recent years. All this success begs the question as to when our favourite purple dragon will get his time back in the limelight. As a huge favourite among fans, Spyro defined many people’s childhood – and the hype for the Reignited Trilogy was immense. It was a beautiful dedication to Insomniac’s original PS1 trilogy – however, we were left needing more. Will we get a new instalment, with updated graphics for our newest generation consoles? I certainly hope so! And if that’s the case, here are eight must-have ingredients for our next fiery adventure!

Over the years Spyro has had a mixed bag of games, to say the least. Though the original trilogy is still pretty much untouchable to this day, the PS2 outings were… less than satisfactory. With a spattering of rushed projects, strange spin-offs (looking at you Spyro Orange for the GameBoy Advance) and let’s not even talk about the Skylanders take over – many thought his legacy would be left in the dirt forevermore.

However, one vital factor may have made some difference to these. The concept of going through portals into other worlds was one of the most exciting aspects of the older games! It was fantastic for kids to have a huge variety of characters, world designs, and themes all within one game. Unfortunately, this is something a lot of the later games missed out on. Perhaps in an attempt to modernise the franchise the core mechanic of the game was soon forgotten!

For a successful sequel, portals need to be incorporated in some way and be experienced by a whole new generation. It could be made exciting and fresh, and be a beautiful way to showcase the fantasy world we all know and love. The game could also benefit from having more to do in the homeworlds. An ‘open-world’ style, more areas to explore, side quests, and a range of secrets and mini-games to complete, would sure go a long way!

Thanks to Toys For Bob, the Reignited Trilogy looked incredible. It stuck to the classic design that is so recognised and beloved by many. With updated graphics Spyro is seen looking his best, his design appealing to kids and adults alike. Its colourful cast of quirky and interesting characters are cartoony but expressive and lovable. We now have the opportunity to breathe new life into these characters! Perhaps they could come up with a few new ones to boot!

These designs are a must-have for any future projects. It’s also something that can be scaled up massively on newer consoles with much more life and detail given to all character models. Yes, we want gorgeous looking graphics. But we don’t need realistic looking dragons. There isn’t any need for any Metal Gear Solid 5s, GTAs, or Witcher 3s here. Gimme a pixelated polar bear with a fishing rod any day.

Old (And New?) Cast And Crew

When talking about Spyro, it is impossible not to mention a whole host of other characters that made the games as great and memorable as they are. Moneybags, the daft two-timing cash hungry bear was an absolute staple of the original trilogy. He brought humour, but also allowed for a few interesting mechanics such as being able to buy new skills, and in the later games acted like a vendor selling lock picks and much more – and is definitely a must include for future games!

Elora the faun, The Professor, and Hunter are all classic characters that should make a comeback and even be expanded upon. They could have vastly bigger storylines and even playable sections. Not only would the addition of classic characters be great, but there are also plenty of others from the PS2 era onwards too! Ignitus, played by Gary Oldman was a fantastic performance in the Legend of Spyro games, and Cynder (a black dragon villain turned good) would be a fantastic chance to introduce some co-op and variety.

Now, as we’ve said before, over the years Spyro has had a varied and interesting back catalogue of games. Some were good and some were bad. However, most would agree that nothing came close to the original three. Strangely enough, another PS1 hero suffered the same fate – Crash Bandicoot. When the new and highly anticipated sequel was announced in 2020 many were worried how this continuation would work with the MANY sequels and spin-offs that didn’t! The simple answer is, they ignored them! Making Crash 4 a direct sequel to the original series was a stroke of genius! It helped both old and new fans get on board!

This seems like a solid way for Spyro to go in the future. Not only would this allow old characters to return, but it would also make sure any new game had the feel and heart of the classics. Another leaf to take out of Crash’s book may be to have an increase in difficulty. Although Spyro is a very family-friendly title (and should stay that way!) it may need to step up to accommodate its now much older fan base. The kids these days are much more game savvy and may lose interest in a game as simple as Spyro. An increase in its depth and difficulty may be just what a new title needs.

Other Playable Characters And Mini-Games

Who could forget some of the amazing playable characters Spyro has had over the years? With the likes of Sergeant Bird, Sheila the kangaroo, and Bentley the yeti, these new playable characters injected some exciting new play styles into the title. They introduced some awesome mini-games and really changed up the pace.

Spyro also had his fair share of mini-games himself, and these included a huge array of vehicles too. From skateboards to tanks, and the legendary flying speedways, there was a huge variety of things to try out and have fun with. With races, stealth missions, time trials and much more these really would be great fun for any new fans coming to the franchise, and a lovely bit of fun for older fans wanting to go on a nostalgia trip. This would also give developers a chance to introduce a range of new and exciting characters and vehicles and expand upon what’s already been established.

Having Insomniac, the developers of the first three games, be involved would be an amazing call back to the roots of what made these games so good. Although having Insomniac develop a new Spyro is unlikely, it would be great to have them involved in some way. Fresh of the success of Spider-Man for the PS4, Insomniac is still a very prominent development team. Having them contribute to the design or concept can only be a good thing.

The team only had great things to say about Toys for Bob when the Reignited Trilogy dropped. They tweeted their praises for the game saying that “our boy looks better than ever!” They also played through the game on streaming sites and seemed to love the resurgence of their beloved purple boy with a whole new audience. Hopefully, this means going forward they might contribute towards a new Spyro project, or at least support it wholeheartedly.

In the 90s and early 00s, collect-a-thon games were hugely popular. Combined with console mascots and platforming games, consoles were flooded with everything from Mario and Sonic, to the lesser remembered Croc or Glover. Although this style of game making is pretty dated by now, it is a key ingredient into what made Spyro a huge hit. These days we tend to have more story-focused, skills-based or multiplayer gaming experiences – rather than the main goal being to collect a bunch of stuff!

However, due to its iconic gems, dragon eggs, and dragonflies – it would be great to see them make a comeback, perhaps in a more subtle way. They could be an additional extra, and getting 100% unlock special rewards such as skins or trophies. It could simply be a challenge for those completionists that want a little more out of their gameplay. The eggs thieves are also so well remembered (and hated) but are a staple of the franchise nonetheless. They were even difficult to catch even on the PS1! Either way, having these implemented in some fashion may open it up to more serious players and add extra hours of content for those that wish to do it. If done well, it could be the healthy balance old and new fans are looking for.

Many players will always remember the big villains from the first three games – Gnasty Gnorc, Ripto, and The Sorceress. They were fantastic, over the top, camp, cartoony villains that were perfect for a kids game but funny enough for adults to enjoy too. When the PS2 era rolled around they were reused several times and unfortunately this was not a good thing. They had no real story or reason for coming back. Unfortunately, that made these plot lines feel weak in comparison to the earlier titles.

This is why for a new game, we NEED a new big bad! Someone fresh, exciting, and like we’ve never seen before. A new game has the potential to be a fresh start for the franchise. It could really benefit from not only a new character but deeper motivations. The developers have a huge fantasy world to explore and could even include magic! Maybe they’ll explore Spyro’s past or even an old friend turned enemy.

The opportunities are endless and with a new title, we have to explore this. Even if it means going back to the classics at a later date, or have them appear as a fun call back to simpler times, a new generation game is begging for a new generation baddie. Hopefully, a new title is not too far away and hopefully some of our wishes will be fulfilled. Toys For Bob, we leave our dreams in your more than capable hands.