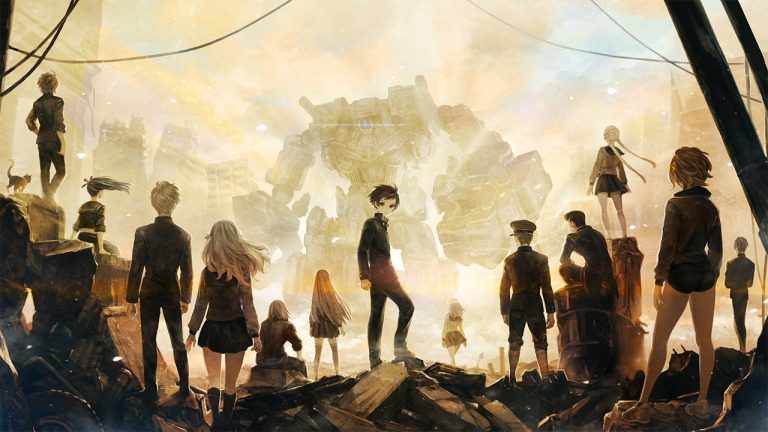 13 Sentinels: Aegis Rim takes familiar sci-fi and anime tropes and reworks them into something new, both a homage to its creative inspirations and a statement on how media dictates culture. All the while, the game strides the line between hard science fiction, explosive mech action, and melodramatic shojo sweetness. It is by far one of the best games released this year despite some missed opportunities.

Set initially in 1985 in the fictional city of Ashitaba, Japan, this time-travelling thriller takes the player through a complex web of narratives. Its story is filled with contradictions, complex motivations, and betrayals. Each character fights for their plan to save humanity from mysterious Kaiju attacks occurring across various periods, ranging from 1945 to 2105. One by one, the periods are attacked, and it seems that 1985 will be next. The 13 protagonists search for their answers as they find themselves and uncover the mysteries of their world.

“The bulk of the game will be spent in the Remembrance section.”

After introducing its slew of unique characters, the foundations of the world, and the basics of the mech combat SRPG portion of the game, the game splits into three modes. These include Remembrance, a 2D adventure game, Destruction, the SRPG, and Analysis, where you can unlock and read extra lore and information using points earned in the other two modes. You can also replay scenes from Remembrance and see them in chronological order.

The bulk of the game, for most players, will be spent in the Remembrance section, which strides the line between a traditional adventure game and a visual novel. After the prologue, the player can choose between the 13 characters as they are unlocked by specific events or by completing waves in the Destruction.

“Each of the characters is steeped in and inspired by pop culture while maintaining their own identity.”

13 Sentinels’ characters run the gamut. While they are mostly trope based; the otaku, the rich playboy, the sukeban, the ditzy shojo protagonist, almost every one of the characters has something to distinguish them. The specifics about each character, along with their memorable silhouettes, make each of them stand out.

For example, Juro Kurabe, the closest the game has to the main character, is an otaku, but he is fleshed out with unique interests and presented in a down-to-earth manner. He’s a film buff who loves Kaiju and B-Movies, and he’s reserved, sometimes childish, and resistant to the call to action.

Throughout the playthrough, I could not help but be reminded of fellow mech pilot Shinji Ikari from Neon Genesis Evangelion. Like Juro, each character is steeped in and inspired by pop culture while maintaining their own identity. True to its shojo-leanings, all of 13 Sentinels’ protagonists are paired up with a romantic interest, including one LGBTQ pairing. Though it is somewhat poorly handled, it is still one of the better examples Atlas has published in recent years.

In the Remembrance sections, you will interact with objects and characters, and occasionally this will lead to a thought bubble. You can view thought bubbles in a menu and either hear a character’s thoughts on it, or you can use a thought bubble on another character or object to proceed with the scene. A thought bubble might even end up shifting you to one of the four other eras in the game.

“The pacing is not always perfect.”

Though there are different ways to approach puzzles in this section, there aren’t extra scenes or endings that you can get from replaying this portion of the game. You are required to finish 100% of each character’s storyline, and you must complete all possible scenes outside of one or two cases. Originally the game offered different paths and endings for each character, but they were cut due to time constraints.

It is a real shame that alternate paths were not present in the final game. Despite an engaging narrative and likable characters, this section is sorely lacking in elements of interaction. While the thought bubble mechanic is an excellent concept for constructing puzzles, they are under-utilized throughout the game.

Even so, whether you are looking for a highly interactive or more hands-off experience, most will not be disappointed. Vanilliaware’s latest game effortlessly mixes the light entertainment of a great shojo and heady concepts of something like William Gibson’s Neuromancer. The addition of loveable high school romance and hijinks make it easier to pick apart 13 Sentinels’ complicated timelines and thoughtful themes.

However, the pacing is not always perfect. Occasionally there are long and dull monologues with little lighter dialogue in between. Even with these lulls in the script, there is always another big twist or plot revelation around the corner.

“13 Sentinels Makes Being Overpowered Way Too Much Fun”

While maligned by other critics, the Destruction mode was a nice change of pace to break up the long sections of the narrative. In this mode, like other SRPG’s, the player controls up to 6 characters per each wave or level, and there are over 30 waves with an optional endgame endless mode (virtually unlimited it goes up to wave 9999). There are 13 sentinels to choose from, and each has its strengths and weaknesses. Some focus on long-range or melee attacks, while others can set up turrets and shield generators for defence.

Turns and actions are handled in an active time battle system. Each sentinel has a meter that must be filled to make your next turn after you have used up the unit’s action points. While you wait for meters fill, Kaiju are free to attack your sentinels or head straight for the Aegis, which must be protected to complete the mission.

For destroying enemies, you gain meta-points, and once you have enough, you can use a field-wide Terminal Command, with the default being an emp blast. After defeating all enemies, the wave ends, allowing you to spend your meta-chips earned from the battle. These are used to upgrade your sentinel’s stats, unlock or upgrade new attacks, and more. While some of the upgrades are genuinely useful, others never come in handy. The sheer amount of upgrades available leaves many feeling completely useless outside of the endless mode, due to its low difficulty.

Other mechanics like the brain overload system, which can prevent you from using a character more than twice in a row, can be circumvented by an automatic rest in exchange for slightly fewer meta-chips. But, while it fails to commit to a hardcore experience, it’s the arcade action and excellent presentation which saves this mode from being a bore.

Most of these battles come down to choosing a well-rounded team, setting up defensives, and using appropriate attacks. It is this simplistic loop where the section can be quite fun. Though it lacks the need for nuanced strategy, it more than makes up for it through its presentation and ease of play. Liberal amounts of screen shake and damage numbers litter the screen during massive missile barrages and punchy melee attacks. Though many have labelled it as an RTS or tactics game, it is perhaps more apt to see it as a tower defence than a hardcore strategy experience.

“The voice acting and sound are similarly engaging.”

This excellent presentation also carries over to the rest of the game through Vanillaware’s signature art style. The game is somewhat a departure from their past work, with more realistic character designs and backgrounds than the exaggerations commonly found in co-founder and artist George Kamitani’s work. Art assets appear to be digitally painted in a layered and impressionistic style to a beautiful effect, resulting in many vibrant and engaging scenes throughout the game.

The voice acting and sound are similarly engaging with expressive and memorable acting and a fun electronic soundtrack (especially the 80’s inspired idol song “Seaside Vacation”). There are some highlights in the cast as well. Fans of Kill La Kill will appreciate Ami Koshimizu as Yuki Takamiya, a teenage badass reminiscent of Ryuoko Matoi from the popular series. Though I preferred the Japanese voices, the English dub is better than expected, especially with recording sessions being disrupted during 2020 due to COVID-19. 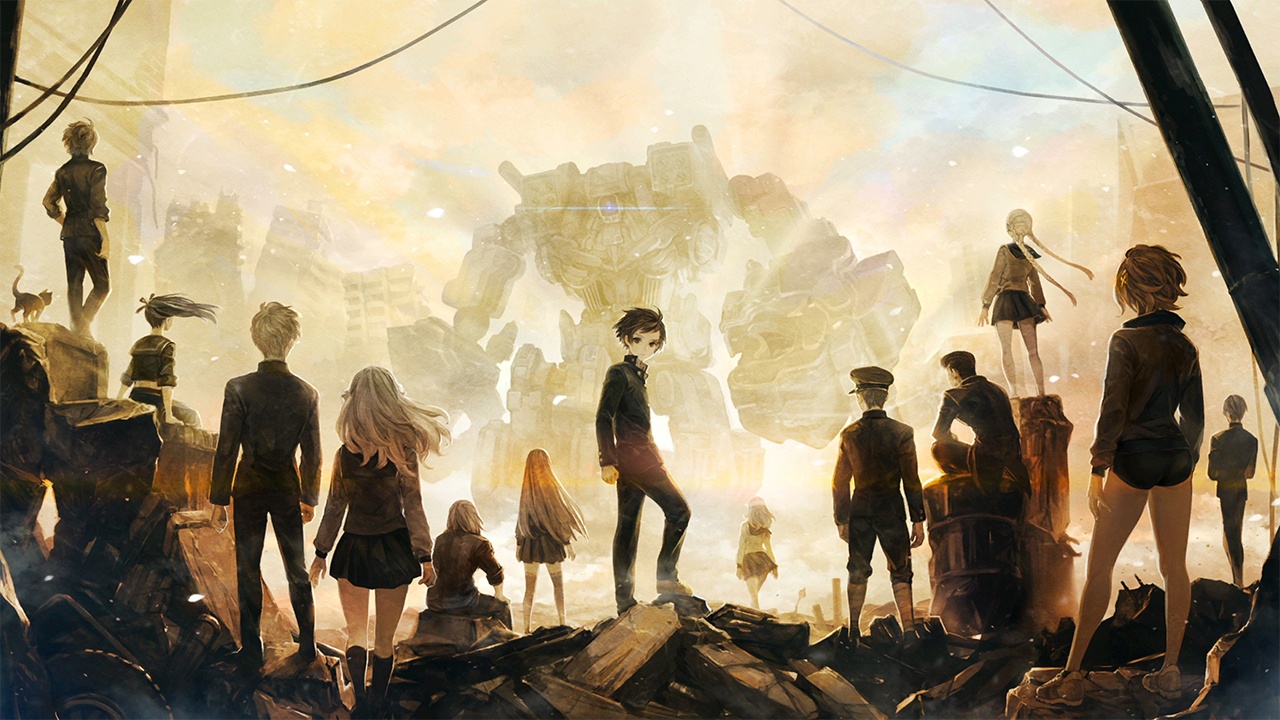 13 Sentinels: Aegis Rim Review
Summary
With an incredible presentation, flashy combat, memorable characters, and depth and nuance in its complicated time-travelling kaiju-fighting narrative, 13 Sentinels Aegis Rim is a must-play for most PS4 owners with at least a tolerance for anime melodrama. Though it’s not always engaging on the minute to minute level, it more then makes up for the lulls with mind-bending twists, plenty of emotional pay-offs, and screen shaking tactics battles.
Pros
Excellent Narrative Presentation
Memorable Voice Acting
Screen-Shaking Tactics Battles.
Cons
Cut Content
Long, Dull Monologues
Some Tedious Gameplay
8