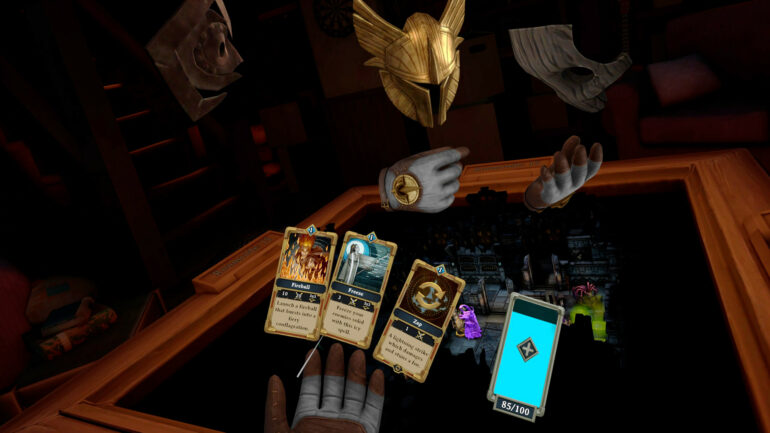 Resolution Games have announced that their upcoming VR dungeon crawling adventure Demeo will be launching onto various VR platforms next month. The co-operative adventure has received a lot of buzz since its gameplay reveal trailer dropped last month, garnering well over 14,000 views. CEO of Resolution Games, Tommy Palm, has expressed their genuine appreciation for fan’s excitement, and how they can’t wait to get Demeo into players hands.

“We knew that RPG fans were going to love Demeo, but we had no idea just how excited they would be until we released its gameplay reveal trailer last month […] It has been so fun hearing from players all over the world about how excited they are to get their hands on the game and experience their beloved tabletop game nights again with their friends after a long year apart. [It] is going to be unlike anything available in VR today, and we can’t wait for players to take [it] on”

Demeo is a fantasy roguelike dungeon crawler that’s reminiscent of a good D&D campaign. Players will have to utilise co-operation and strategy to explore various dungeons in an attempt to rescue the Mad Elven King. For non-VR players, Demeo will be releasing on PC later this year. So, you’ll still be able to hop on with your friends and give the die a good shaking. Here’s some of what you can expect when Demeo launches this May:

Demeo will be releasing on May 6th, 2021 for Oculus Quest and Rift, HTC Vive, Valve Index and Windows Mixed Reality. It will also be launching on PC later this year. It will cost $29.99. You can head over to its Steam store page to wishlist it there. Or, head on over to its Oculus store page to get more details. Will you be picking it up when it launches early next month? Let us know in the comments below.