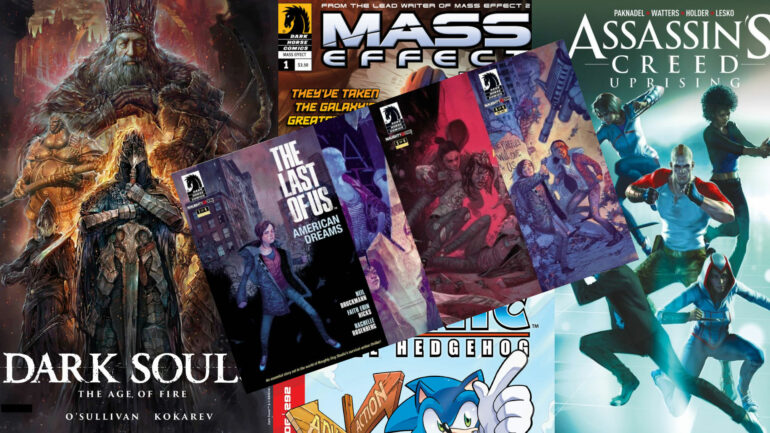 In a medium filled with as many genres as there is creativity within them, it’s often easy to forget that many video games have stories or narrative beats that get left unexplored. That’s why some creators turn to the realm of comic books. Comics are a unique way of exploring parts of the narrative that people may wonder about or to expand upon the universe more. So, without further ado, here is a selection of 5 of the best comic books based on video games.

The worlds created by Casey Hudson and Drew Karpyshn for Mass Effect can be easily compared to franchises such as Star Wars and Star Trek. The trilogy does a beautiful job of world-building and drawing in the viewer through a fantastic sci-fi narrative and well-rounded characters that make you want to know more about them.

As beautifully developed as the world is, there were cracks in the trilogy that writers at Dark Horse comics could expand upon. Specific mini-series like Homeworlds and Evolution expand upon certain characters’ backstories, while others lead to Mass Effect 2 and explore original stories.

Starting in 1992 and lasting over 250 issues until it ended in 2016, Archie Comics’ interpretation of the blue speed demon earned its place among great comic books. It also holds the record for longest-running comic book series based on a video game.

While originally starting out adapting plots and characters from the cartoon series, the comic does a beautiful job of carrying those threads throughout the entire comic run while also adapting many of the games in the franchise into one overarching narrative. Characters such as Big the Cat and Shadow the Hedgehog join Sonic as he battles parallel universes and continuity reboots to take the reader on a fun ride constantly. It is a shame that it ended, but that does not lessen this comic’s performance.

As with the Mass Effect comics, there are places within the Assassin’s Creed franchise that allow for deeper exploration while also connecting to the larger beats.

Dark Souls is a franchise famously known as one that doesn’t throw narrative exposition in your face. Instead, it tasks you with exploring its worlds and discovering their secrets as you go along. That’s partially what works so well. The worlds featured within the series are rich and ready to be explored that you’ll want to go looking for the lore.

That’s where the comics come in. While some are non-canon, dealing with Gwyn during the Age of the Ancients and others are digital-only or shorter stories, all delve deeper into the franchise’s lore and take it into directions that you may not expect. This all works perfectly with the franchise that we’ve come to know.

The Last Of Us: American Dreams

The Last of Us is well known, and rightly so, for being one of the best video games possibly of all time. It is a beautiful exploration of the human condition and the lengths you will go to for someone you grow to care about.

Beautifully written by Neil Druckmann, the game served to prove what games could achieve from a storytelling perspective. American Dreams follow Ellie as a young girl before we meet her in the game and her first meeting with Riley, her best friend. The comic works so well because it was mainly written in house at Naughty Dog by Druckmann, allowing the canon to run as smoothly as possible.