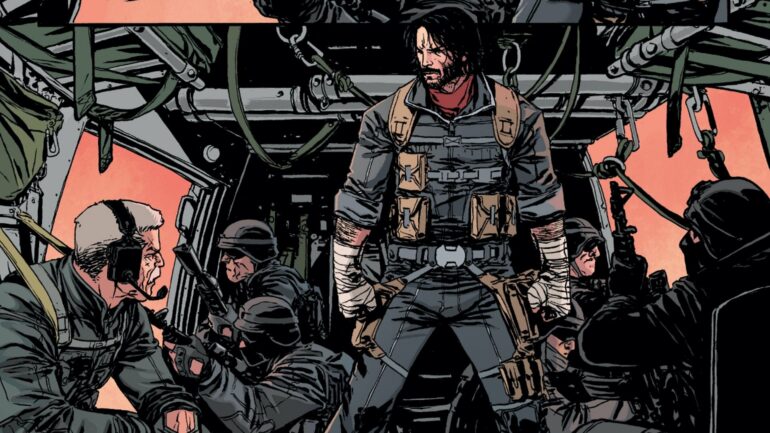 Netflix Set To Produce Live-Action And Anime Adaptations Of BRZRKR

Netflix has secured the rights to Keanu Reeves’ comic book series BRZRKR and is developing a live-action film alongside an anime adaptation.

BRZRKR is the latest comic book by publisher Boom! Studios and is written by Keanu Reeves and Harvey Award-winning and New York Times Best-Selling comic-book writer Matt Kindt. Boom! Studios are a renowned comic book publisher and have produced acclaimed original comic book series such as Irredeemable, Coda and Alienated, as well as producing content for franchises such as Adventure Time, Angel and Ben 10.

The comic book focuses on a man known only as Bezerker, a half-mortal and half-God who has spent his immortality compelled to commit violent acts. After wandering the earth with no purpose for thousands of years, he eventually seeks solace in the U.S Government where he is tasked with fighting “the battles too violent and too dangerous for anyone else”. In exchange, he’ll finally learn the reason behind his endless life of violence, and how to finally be set free.

Before even beginning production, the series had already garnered mass appeal, likely thanks to Reeves’ star power. Boom! Studios later launched a Kickstarter campaign to distribute the series to a wider audience. The project managed to garner $1,447,212 across 14,571 backers. BRZRKR would go on to attach acclaimed artist Ron Garney, colourist Bill Crabtree, and letterer Clem Robins. Originally intended to hit comic book stores in October, it would go on to launch on March 4th, 2021, and would immediately sell out. Having sold over 615,000 copies already, Boom! Studios announced a second printing which will launch on April 7, 2021.

Despite the series having only just recently launched, Netflix has swooped in to purchase the rights to both a live-action adaptation and an anime adaptation. This isn’t the first time Netflix has done both. Their critically acclaimed series Altered Carbon and The Witcher featured anime spin-off films to supplement the series. While there isn’t much information available about the live-action adaptation, the anime series is reportedly expanding the BRZRKR universe, “by exploring different elements of the story”. Keanu Reeves is set to star as the main character, as well as produce the adaptations alongside Boom! Studios Ross Richie, Stephen Christy and Adam Yoelin.