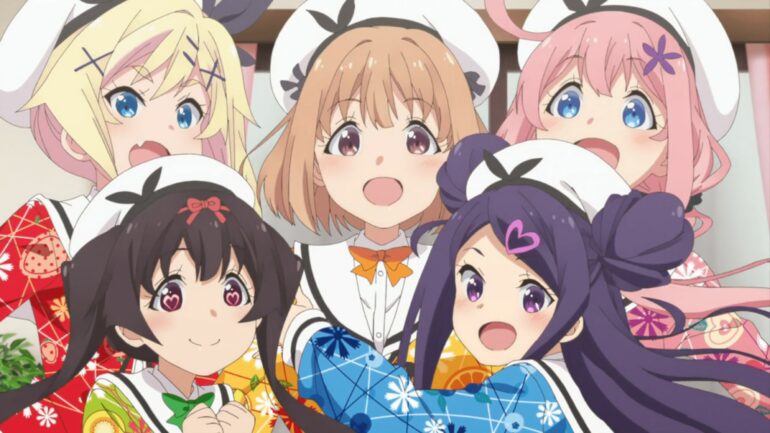 Over the weekend, a women’s rights group in Koganei City, Tokyo, staged a protest at a convention expressing their disapproval for the anime Dropout Idol Fruit Tart.

The first surprise is that this occurred in Japan. Indeed, while here in the Occident, the culture war has permeated every facet of our lives to the extent that several news publications even blur the line between entertainment and politics such as Anime Feminist, even the latter didn’t find the anime problematic enough to call for its cancellation.

Inversely, ‘‘woke culture’’ is simply a nonexistent phenomenon in Japan. In fact, BLM protesters were puzzled by the indifference of their fellow Japanese when they organised a march in Tokyo.

Now that the context has been established, here is what happened. One of the new anime adaptations for the Fall 2021 season was Dropout Idol Fruit Tart. Based on a collection of a 5 volume ongoing manga series, the plot’s premise goes along the line of a group of cute anime girls who are forced form an idol group to pay back a ¥100 million debt to save their dorm from being demolished. For a ‘Slice of Life’ anime, this is nothing too irregular.

Last weekend, a convention was held for the anime in Koganei City, which also happens to be the city where the plot of Dropout Idol Fruit Tart is set. As a Montrealer, I know a thing or two about conventions, and I know that a city honouring a show that takes place in that very city is great for business, tourism and photo-ops! As expected, a local Liberal Democrat politician (Japan’s Conservative Party), city council member Shimizu Gaku (清水がく) was present to show his support for the show. Because this is Japan we are talking about, this elected official also happens to be Director of the Koganei Anime Council, as one naturally might be. I mean, you can’t make this stuff up.

A crowd of protesters gathered in front of the event to demonstrate their opposition. It became apparent they were from a local women’s rights group from the fliers they were distributing. Those fliers contained the substance of the protest, namely the city’s attempts to attract fans of the franchise through publicity campaigns and merchandise sale. They also stated that the show was an embarrassment to the city. The fliers also featured so-called disturbing images featuring the characters in underwear. By the way, that’s really the most problematic content they could find.

The protesters held signs decrying ‘‘Junior High School girls in bathing suits’’ and that ‘‘this is not an anime to show your children’’. Once again, you cannot make this stuff up.

Thankfully, Japanese officials did not cater to this nonsense and stood by the event. Social media couldn’t help but make fun of the middle-aged women holding signs condemning anime and one user even referring to them as oba-san (おばさんたち), which means grannies or Japan’s version of ‘‘ok, boomer’’.

To end on a serious note, I have been to many conventions and even smaller events. While there has been an outright assault against anime on Twitter, I have never seen an actual protest against an anime, especially one as tame as Dropout Idol Fruit Tart. After watching it, I can’t say there is anything I haven’t seen in other ‘Slice of Life” anime featuring cute idol girls that would deem outrage. Although, Roko is best girl, fight me.

Protesting is a right, but the cause needs to have credibility in order to be taken seriously. The point being that in the last few seasons, we have had anime adaptations of Interspecies Reviewers, Peter Grill and the philosopher’s time, and of course, Redo of a Healer. Actually, one of the first anime I ever watched was Shimoneta and what weeb has not at least heard about Boku no Pico?

What are the standards for outrage? There are none; it’s just open season on anime.

In any case, if there are lessons we should learn as anime fans from this story, let them be the following: