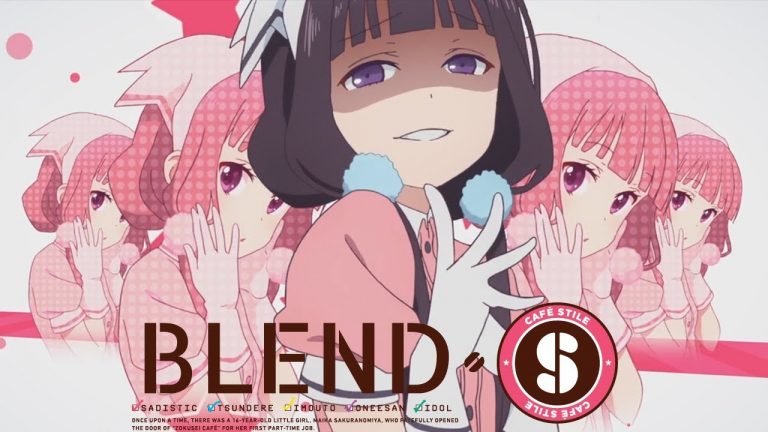 Smile! Sweet! Sister! Sadistic! Surprise! Service! We are Stile! If you are already familiar with these lyrics, then good. If not (and even if you are), allow me to introduce you to the wonderful world of Blend S.

Blend S is a slice of life comedy anime adapted from the Yonkoma (4 panels) manga of the same name written and illustrated by Miyuki Nakayama. It follows the day-to-day life of Maika Sakuranomiya, your average 16-year-old girl save for one small quirk: she looks like she’s about to murder you whenever she smiles.

Despite her otherwise cheerful personality, this prevents her from getting a part-time job, which she needs to fund her lifelong dream of studying in a foreign country. However, Lady Luck smiles upon her one day and guides her to the innocuous Café Stile (pronounced “stee-leh”), where the waitresses serve the clientele while roleplaying familiar anime tropes.

Maika is immediately hired and given the role of the sadistic character that fully leverages her asset. However, I have to imagine that she was this close to calling the police on the peculiar (to say the least) manager. Alongside Kaho Hinata (Tsundere) Mafuyu Hoshikawa (imouto or younger sister) Miu Amano (onee-san or older sister), and Hideri Kanzaki (idol), Maika and her sadist persona embark on a new adventure every episode. Whether it be serving customers, going to the arcade together or just bonding with one another.

If you haven’t guessed it already, the title of this show can be interpreted as a mixture (“blend”) of the different character’s traits that start with the letter “S”. Each of the first six words in the opening – smile, sweet, sister, sadistic, surprise, and service – can be attributed to one of the main characters as a quick summary of themselves.

Our protagonist, Maika, works very hard to bring smiles to her customers’ faces. It is incidentally her smile that landed her in this curious situation in the first place, providing lots of comedic value every step of the way. Kaho, the first coworker Maika meets, is very carefree, sweet and loves playing video games in her free time. Mafuyu is the third of the original three waitresses at Stile and plays a vibrant and bubbly younger sister. Miu, portraying the older sister character, appears graceful and refined at first glance but conceals some sadistic tendencies on the inside. Hideri is the latest addition to the Café Stile crew and well, let’s say that she is full of surprises.

Lastly, Dino and Koyo Akizuki, the Italian manager and member of the kitchen staff, respectively, round out the cast and provide the services offered by the café.

Blend S might not have an intricate plot like Attack on Titan or a ton of emotional baggage like Clannad, but what it has is pure, unadulterated comedy, brought to you by the complement of exaggerated personas and the interactions between them. For instance, Maika alternating between her unintentionally sadistic personality that ironically pleases the clientele – she genuinely worries about mistreating her customers, but they in fact love it– and her apologetic personality, when she realizes that what she said would have been extremely rude in a conventional setting, never fails to deliver a good laugh and can be really cute too.

Although the various comedic devices such as this one don’t evolve throughout the series, they are always used in novel ways, which keeps you on your toes as you keenly await the next gag. Furthermore, the characters all have great chemistry with each other, amplifying the comedic effects of their interactions.

You’ll definitely chuckle at how Dino’s clownery is combined with Maika’s seriousness (and the occasional sadistic bit); throw in the fact that he has a crush on her, and we’ve got ourselves a one-of-a-kind mess. Likewise, replacing Maika with Dino’s kitchen partner Koyo, who plays the part of Dino’s foil very well, yields a delightful male duo that you can count on to entertain you.

“All the Characters stand out in their own way.”

While the characters may seem one-dimensional (you can describe every single one with one word) and bland, they undergo a lot of development. You get to see these characters’ dark side, allowing for a much deeper understanding than you would typically get.

All in all, Blend S is a lighthearted slice of life comedy anime, perfect for binging on a sunny afternoon or two days before school starts if you’re looking for some chill fun. I’ll admit to the latter, but it turns out that I got a lot more than just some chill fun, not to mention the catchy opening; the show has something for everyone.

As a final note, after finishing this show, I realised that my interpretation of its title isn’t entirely on point: it doesn’t blend its characters and their traits into a homogenous, uniform mixture, but instead makes every one of them stand out in their own way.

If you want to see more articles like this, check out the Marianopolis World Review!