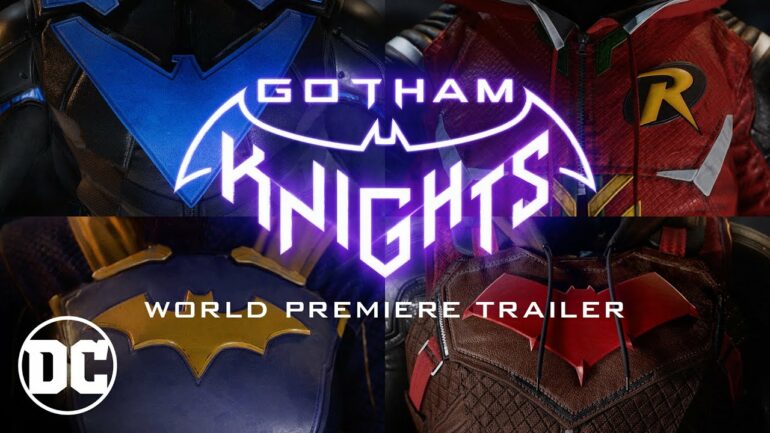 Since the definitive conclusion to the Arkham story at the end of Arkham Knight, it was hard to see where the Batman video game franchise could go from there. After seeing the footage from Gotham Knights, it seems the answer lies in reinvention.

For years, WB Games Montreal has worked as a support developer to Rocksteady Studios, the much-touted masters of creating Batman games. From the respectable, but overly familiar Arkham Origins to working on the Wii U port of Arkham City, they’ve learned the ropes from the best. With Gotham Knights, WB Games Montreal is ready to leave Rocksteady’s shadow while still relying on their core ideas of how to make a Batman game.

Based on what we’ve seen so far, Gotham Knights has a distinct style and substance from the Arkham series. From the more stylized, heightened art direction to the different voice actors and the focus on co-operative missions, Gotham Knights feels like a new world. The gameplay footage we saw reinforces this even further, with echoes of Crystal Dynamics’ Avengers sprinkled into the mix.

Players will aid each other on missions as members of the Batfamily with their own gadgets and abilities. Both players and enemies will have character levels, placing importance on gathering XP and powering up your characters as you fight your way through a Gotham City without Batman. The game appears to be leaning on action RPG-inspired elements. Players can see damage numbers and health bars whenever attacks land on enemies. Gear appears to play a large role, as the gameplay footage showed us a Batgirl and Robin with armor different from their default outfits in the game.

While the combat’s focus on quick, hard-hitting combos will feel familiar to fans of the Arkham games, there wasn’t a counter prompt in sight. The demo’s Batgirl dodged ranged attacks with simple sidesteps, which might mean that we get a dodge mechanic similar to Avengers. On the other hand, the stealth takedowns would feel right at home in Arkham, as they still seem to work the same way: maneuver across the room with your grapnel gun, approach an enemy from behind and silently choke them unconscious.

This shows that the overall direction of the game may be different, but there are still things that feel decidedly familiar. Batgirl racing to a mission on her motorcycle brings back memories of cruising through Gotham in the Batmobile. The basic idea of fighting crime as an unpowered vigilante with gadgets, martial arts skills, and stealth is unchanged. After all, there aren’t many ways to change the Batman game formula without altering the fantasy of being Batman, Robin, or any of his unpowered proteges.

Beware the Court of Owls

You guessed right: the rumors about this game featuring the Court of Owls as villains were true. Scott Snyder’s critically-acclaimed Court of Owls storyline from his Batman run was a breath of fresh air for the mythos. It worked because of the mystique and menace of an unknown threat buried within Gotham. If Gotham Knights really wants to bring these characters to life, they shouldn’t be interchangeable mooks to easily dispatch. The mystery and threat of facing the Court of Owls’ Talons should be palpable to the player when fighting them in the game.

The game’s biggest challenge moving forward will be making each of the playable characters feel distinct and rewarding in their own ways. Red Hood’s use of firearms certainly sets him apart from the others visually. However, if Gotham Knights truly wants to deliver on its experience, WB Games Montreal should allow the characters’ movesets and abilities to diverge and intersect in interesting and meaningful ways.

Gotham Knights is scheduled to be released in 2021.