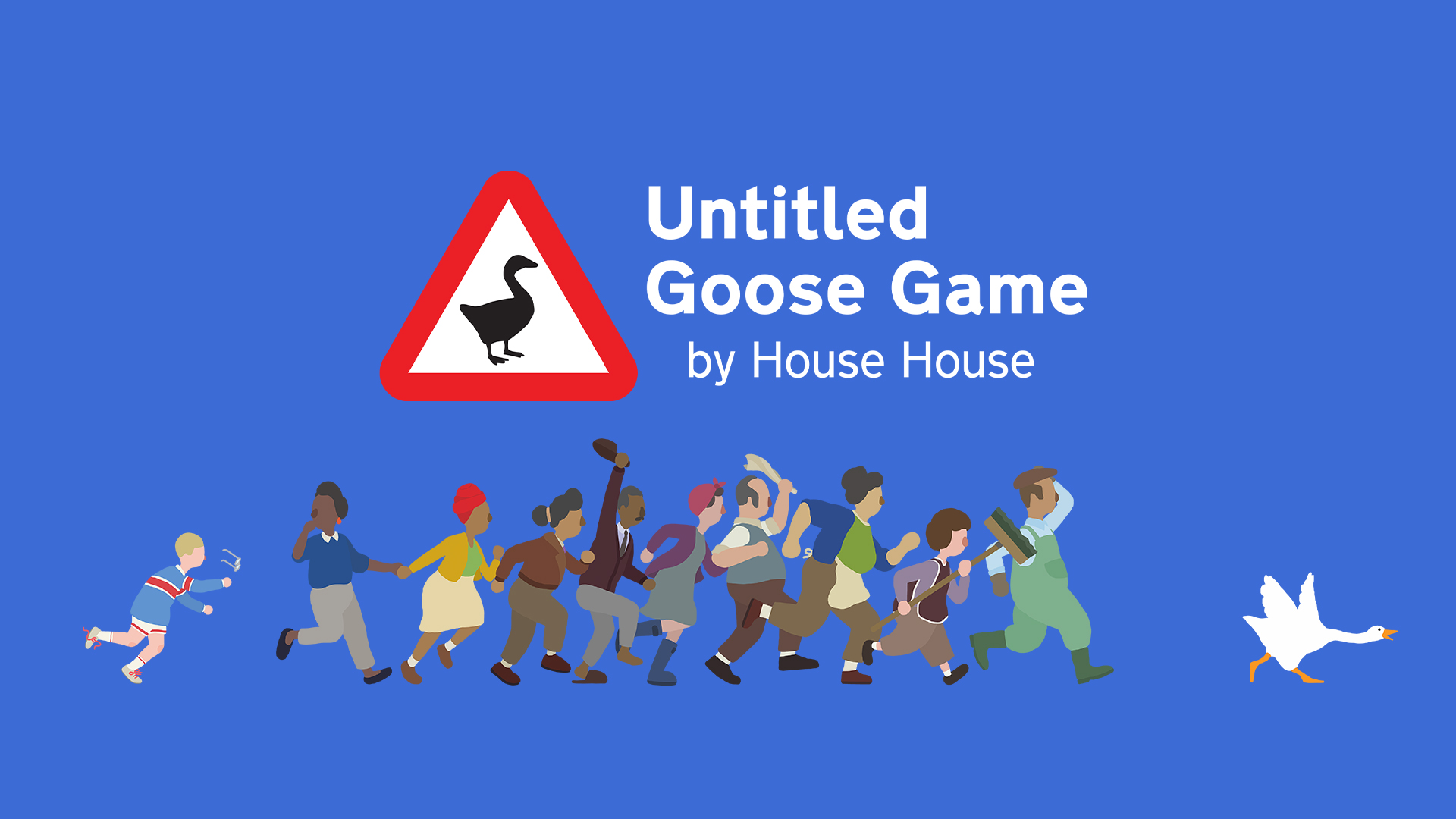 Untitled goose game perfectly mixes elements of stealth and puzzle into a game. The game takes the authentic feel of being a goose into consideration because if you did not know, geese are cruel and heartless.

“It’s a lovely day in the village, and you are a horrible goose.”

This game begins with a short introduction before cutting straight to the action. There are some small objects to interact with until you get to a fence you have to open. You swim across the pond, and your journey of mayhem has officially begun.

Now it’s time to start a-goosin’. Untitled Goose Game utilises the developers’ mentality, multiplicative gameplay – rules in a game are consistently changing, allowing you to be creative with your problem-solving. You can use the consistent rules the game lays out to have many new solutions to tackle problems thrown at you.

Throughout Untitled Goose Game, there is a groundskeeper. He does not know it yet, but he is about to have a bad day all because of you. But how are you going to do it, maybe you can use the radio to bring him to a fence to let you in? How about you use the sprinkler, so he has to open the fence to turn it off. That’s just the first ask.

“Each memory has a soundtrack of its own.”

The game continues to throw more and more unique situations where you are a terrible goose. An example of this is when two people are situated on either side of a fence. Instead of handing each other the objects on their side of the fence, they decide to lob it to the other side of the fence like an amateur football player. You have multiple ways to approach this situation, but my favourite is to hand one of them the vase, so he throws and breaks it. It is these little laughable moments which make this indie game so magical.

The music in this game can be summarised in one word, stellar. Due to Untitled Goose Game‘s low budget, the soundtrack was composed exclusively by a piano. This proved to be amazing. It perfectly captures what I would describe as a feeling of playful tensity. Your heart rate might be racing as you steal jam from a farmer, and the music will be doing a dainty little fast-paced dance to go alongside you. It matches your adrenaline as you commit the greatest heist known to man (rake in the lake), but also quite whimsical. The soundtrack will never make you come to an existential conclusion about yourself, but believe me when I say it will get you tapping your foot at the very least.

The art style in Untitled Goose Game is superbly minimalistic. There is hardly any detail on much of anything, but it is still easy to identify what everything is. Untitled Goose Game has a total of… “no shading whatsoever” in the game. All the colours which are used in the game are dull, yet they all mesh together. Anyone who has seen this game once can recognize it from a mile away.

That is when a game succeeds. The animation is also simple, but by no means, is it lazy. The characters portray a lot of emotion. You can’t even see their eyes, but you can feel the anger bursting out of their body and almost see the steam coming out of their ears. The characters all have their own little fun unique quirks all brought together by a central character plot. They despise the goose. When the animation can so accurately portray personalities without using any words in the game, it produces a beautiful, imaginative narrative.

Untitled Goose Game features a dedicated honk button, which believe it or not, is useful. It is not the most extravagant thing, but it is definitely one of the most humorous useful features in gaming. I can not even begin to tell you how many times I used the honk button in this game. It is very useful to confuse people to give you just enough time to pull off a little thievery. It is easy to see this as a bit of a crutch which it admittedly is, but this also adds to the fun of the game.

You can also sprint in this game which gives you a little less control of the lovable little goose. Ultimately, it makes turning harder for the trade of being faster. This sprint is absolutely necessary for Untitled Goose Game. Majority of my first playthrough consisted of me sprinting around the place.

Almost every item is also interactable. You can pick up and screw around with anything you may like to. Most of the puzzles force you to use at least one item or another. There are two other moves for your goose which sadly are not as useful. There is the duck, no not the bird you silly goose, but the action of ducking. It has its uses but not nearly as much as the other two.

The last control option is excellent but not as functional as the other functions. The goose asserts dominance and demonstrates it’s epic wingspan. If I am not mistaken, it is used once while performing for some people, one of my favourite tasks. Still, it would’ve been nice to be able to use it a little more.

Untitled Goose Game: An Indie Masterpiece – Review
Summary
Throughout Untitled Goose Game, you are mainly completing tasks and ruining people’s days. Linear game experiences are refreshing, and that is exactly what Untitled Goose Game is. Despite being a puzzle game, it offers excellent replayability and the option to play through the game with a friend. Untitled Goose Game cements itself as an indie classic and a game that reminds you what gaming is truly about: fun.
Pros
Unique Gameplay
Stellar Soundtrack
Excellent Replayability
Cons
10