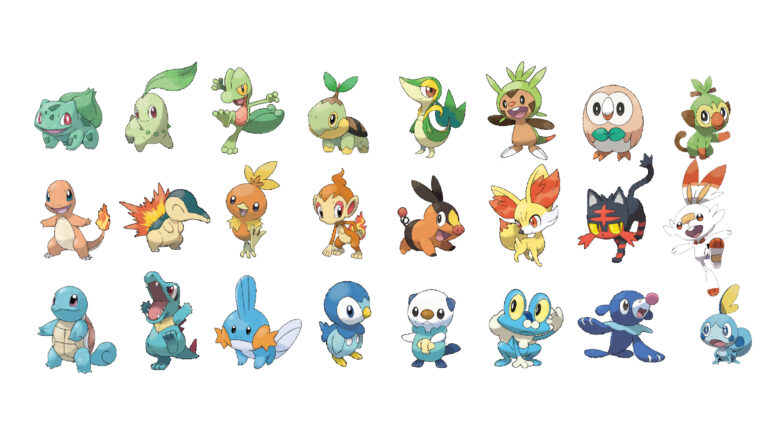 The Best Starter Pokémon Of All Time

Pokémon Day is right around the corner, and here at The Game Crater, we’re all ecstatic! We love Pokémon and can’t wait to hear about all the juicy, upcoming news. But until the 27th rolls around (it can’t come quick enough), we decided that the best way to celebrate Pokémon and all its glory is to compile a list of the best starter Pokémon in town. Several writers have contributed to this article, each with their own impassioned piece about their all-time favourite starter Pokémon. This is a mix of several generations, so there’s bound to be some good advice here for the budding trainer.

My favourite starter pokemon is Bulbasaur. With his agility, higher defence and strong grass attacks, he is the perfect choice for the trainer who uses a tanking strategy. Bulbasaur can take a beating and use moves like Drain to get back up to 50% of the HP he just smacked out of his opponent. Not to mention the leafy boi is a cute little bugger that is fiercely loyal and protective. I believe that Bulbasaur has the potential to be a Pokémon that you never have to evolve as he can learn a lot of highly effective moves from TM’s. I don’t think he needs to become Ivysaur or Venusaur to be a super-effective battler. Did I mention that he’s cute too? I think I did.

My favourite starter is Charmander. For me, it goes back to watching the anime as a kid and seeing Charmander as an outcast. He wanted to be accepted, creating that feeling of resilience and showing people I am more than my circumstances might show. He’s also just adorable! Charmander is an excellent addition to a roster of fighters, and it was the first Pokemon card that I ever got as a kid.

My favourite starter Pokémon is also Charmander. Pokémon Leaf Green was my introduction to the series, and I still remember it being such a simple choice. Charizard is easily up there with Pikachu as the mascot of Pokémon. There’s a reason why it’s available in practically every game. Charmander has always been my number one and is also one of the best from the anime. Between looking fabulous and being dominant in the game, it’s the perfect Pokémon.

Usually, when I first start playing a Pokémon game, I wind up agonising over which starter to pick. I’m never sure which one will fit my playstyle, and more than one of them will usually appeal to me aesthetically. While I’m sure, I’ll use all of them eventually, picking the first one is always a difficult decision. Although it’s not that important in the grand scheme of things, it can hugely impact my first experiences of a generation of Pokémon. It is rare that I look at a new generation of starters and immediately go – “That’s my ‘mon.”

However, when my friends and I got those first glimpses of Gold and Silver, I immediately knew who I would choose. One glance at Totodile’s happy-go-lucky grin, and I immediately went, “That one is going to be my buddy.” And when the remakes of these games came out, I looked to my old friend for my new first outing in the Johto region. I have many fond memories of Totodile, and he remains one of my favourites to this day.

Totodile is my favourite Pokémon from watching the anime growing up. It was always hyper and happy, and it resonated with me. Pokémon Silver was also the first proper Pokémon game I got into, and Totodile was my first choice then. That has stuck with me ever since.

Often the cuteness and final evolution of a Pokémon draws me in rather than how useful they are in battle. For example, there was Charmander who I gravitated towards at the beginning of Red and Blue, as there weren’t a lot of dragons and the few there were didn’t impress me. Charizard was the closest early on, so I naturally went with him.

When I went to Gold and Silver, I thought Chikorita was the most adorable out of the three starters. On top of that, she was the only female out of the bunch, and after having only the NidoKing/Nidoqueen variant in the original games, a female Pokémon (in the anime) that kicked ass and looked cool was great. I was also impressed by her personality in the anime, where she was super tough and unwilling to go down or be captured.

Now, I like all the Johto starters, but Chikorita was the first one I most identified with, to the point where Pokémon Mystery Dungeon assigned me to her right away when I took the quiz. So I guess, in a way, she’s my favourite.

Hoenn is probably the region I have the vaguest memories of for one simple reason: the last time I played in this region was on the Game Boy Advance! But even though I haven’t played these games in over a decade, I still consider one of the starters from this region to be one of my favourites. And that is Treecko.

I remember first seeing Treecko and thinking to myself – “Finally, a grass type with the same reptilian, draconic aesthetic that Charmander and Totodile have!” And the Pokémon itself just radiated a “devil may care” attitude that immediately appealed to me. This speedy, nature fueled cowboy of a gecko is definitely one of my favourites. And Sceptile’s Mega-evolution gaining Dragon-type certainly doesn’t hurt anything either.

As a kid in Australia, I grew up on Channel 10’s wacky Toasted TV. This program gave Australians access to Yu-Gi-Oh, Dragon Ball, and, most importantly, Pokémon. I completely fell in love with the anime, watching it every day before school. Eventually, I managed to get a hold of a game boy and Pokémon Emerald, and that’s when my love for Pokémon grew significantly.

Being situated on an isolated island, it took a while for the latest Pokémon episodes to reach Australia, so I picked my starter Pokémon blind. I immediately fell in with Treecko, and he was my number one for my whole playthrough. I played the game the same way everyone does the first time; level up one Pokémon and attempt to beat the entire game with it.

I finally managed to defeat the elite four after countless attempts with my level 75 Sceptile. In the anime, Ash also used a Sceptile, and it only solidified my love for the Gen 3 Grass starter.

There’s a big stretch of the franchise’s history where the Fire Type starters have kind of a bad rap. For three generations in a row, the fire type starter’s final form wound up being a dual-type Fire/Fighting blend. Fans got tired of it quickly, and I don’t entirely blame them. Among most of the fans, the most tolerated one is Hoenn’s Torchic, for being the first of this stretch. And yeah, Torchic turns into Blaziken, which is a cool Pokémon.

But something about Chimchar appeals to me just a little bit more. I don’t know why. Maybe it’s the fact that it’s built to be a swift glass cannon. Or perhaps it’s the whole Son Wukong aesthetic it’s got going on. Maybe I just like tricky monkeys. Whatever it is, Chimchar has a very special place in my heart in the franchise.

I love Chimchar because Pokémon Diamond on the DS was the first one I played. Like most Pokémon players, I remember my first playthrough very fondly. I was constantly getting lost on my way to the rock gym, bumbling my way through wild Pokémon after wild Pokémon. I genuinely believed I had to fight them all.

Not understanding how EXP distribution worked, I got my trusty Chimchar to do all the work. Inevitably he reached level 16 and evolved to Monferno. After finally finding the rock gym, I rustled over to the gym leader and spammed the living daylights out of mach punch. Chimchar was an absolute champion from the moment I got him, and I’ll always remember him fondly.

I’ve played Pokémon for almost my entire life. It’s hard even to imagine a time where Pokémon wasn’t the go-to game for car journeys. When Diamond and Pearl rolled around, I was just a bairn, yet I still remember them very fondly. That’s predominantly because of Turtwig, the first starter Pokémon that I truly fell in love with. Whether it’s the sapling sprouting from their head, or the childlike grin plastered across their face, I’m not entirely sure. But from the moment I saw Turtwig, I knew we’d be fast friends. Even when they grew into a tremendous, tree-bearing turtle, Turtwig was still my little guy at heart. What a cutie.

As a Pokémon fan since the very beginning, I can honestly say that there are so many candidates for my favourite starter across all generations. However, considering the ever-present rumours of late regarding Diamond and Pearl remakes, choosing my favourite from Sinnoh: Piplup seems fitting. Not only is Piplup an adorable penguin, but it eventually evolves into Empoleon, which can become a powerhouse in the late game of gen 4. This is also the only starter line to give us a steel-type, which is my favourite and most-used type in the Pokémon games.

What are some of your favourite starter Pokémon? Are you excited about the upcoming Pokémon Day? Let us know down in the comments below!