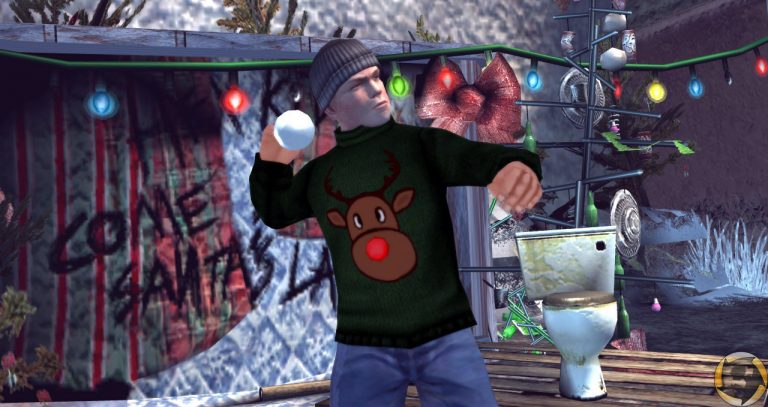 Christmas is not too far away, and while the days seem to be dragging on right now, it will be here before you know it. I’ve decided to give you all some ideas of what to sink your teeth into on the lead up to the big day, so here is my list of the 10 best levels and expansions to play over the holiday season.

Nothing screams Christmas like a little contract killing. In Hitman 2016, a Christmas-themed variation to “The Showstopper” mission was released. It was based in Paris and featured Christmas trees, present boxes, Santa, and two targets inspired by the classic Christmas film Home Alone. And if you’re really feeling more of a Grinch then go give Santa a concussion and grab his Candy Cane… Crowbar.

How do you make one of the more over the top games just that little bit crazier? You give it a Christmas theme and have Mr. and Mrs. Claus rain down hell on aliens with shotguns. With plenty of nods to classic Christmas films and TV shows, this offers some great laugh out loud moments and is definitely worth a play. Just maybe not around the kids.

It’s Christmas Mercenary Day in Borderlands, and Marcus needs your help. It’s not a very long mission but it is fun taking on a bunch of snowmen, and the humor here is signature Borderlands. Marcus shines nicely in this Head Hunter pack, and it’s a fun little play for the holiday season.

Chapter 3 of Rockstar’s Bully brings the Christmas spirit to the mission “Christmas is Here”. There’s snow on the ground, and Jimmy’s mother has sent him a present. (Spoiler: it’s a green Rudolph sweater.)

The snow remains during all of chapter 3, and it’s fun to run around the snowy area throwing snowballs at everyone. It is definitely a fun way to waste time during the holiday season.

Banjo-Kazooie, one of the best 3D platformers of all time, has a Christmas level called Freezeezy Peak. The winter wonderland of Banjo-Kazooie is still a blast to play, and the objectives in this level are great. From collecting presents to having a race with a bear, this should be on anyone’s festive game playlist.

This is a must-play for anyone owning a Nintendo handheld or console. Toy Day has been in all but one Animal Crossing game to date. And with every iteration, it has changed slightly. Now at the time of writing, we can’t say what the Toy Day event will be like on New Horizons this year, but what we can say is, they’ll be snow, plenty of festive items for you to craft, and more than likely an objective get presents for your island dwellers. This is definitely one you don’t want to miss, otherwise, you’ll have to wait a whole year for it to return.

Winter Crash is a reskin of the Crash map from Call of Duty 4. It’s still great to add that little Christmas spirit to your first-person shooting escapades. Sand is swapped out for the sloshing of snow, Christmas lights adorn the area, and there’s even a Christmas tree in the center with presents underneath. That wasn’t all that changed to add to the festivities. Calling in an airstrike resulted in sleighs pulled by reindeers who drop explosive presents to bomb your enemies.

Santa has been kidnapped and brainwashed, so who do we send to save him? Not Batman, not Superman, but the one and only Duke Nukem, in this ’97 Expansion to what ultimately should have been his last outing. Nuclear Winter brings the snow and new festive looks for the enemies of Duke, it’s a great addition to an already great game. The new levels and enemies added nicely to the experience and this should be on everyone’s list of games to play at Christmas.

Gex, the wise-cracking, 4th wall breaking gecko, is a character who needs either a remaster or remake. In his third outing, there’s a brilliant level that features everything you need in a Christmas level; elves, trees, presents, and even evil Santa. Nothing beats walking around the snowy level listening to Gex dropping pop culture references.

Alright so I’m slightly cheating with this one, but it’s a whole zombie game with that festive feeling of dismemberment and flesh-eating. While I’ll admit it’s not as good as the Dead Rising games that came before it’s still fun seeing the Christmas decorations all tattered, and blood stained while being chased by hordes of the undead. Frank West is still the best protagonist this series has, and it’s great playing him again.

Let us know if you have any other levels or expansions that you feel should of made the list, and we will have to check them out this Christmas!