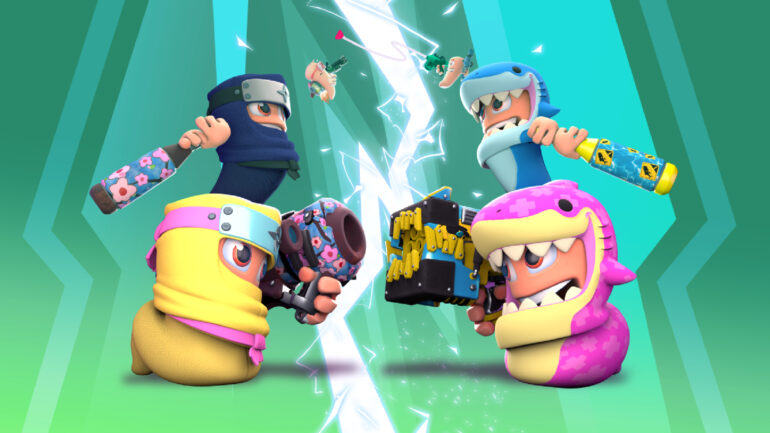 Team17 have announced that the brand-new “explosive” community event, Bazooka Bowl, will kick off next week for their beloved title, Worms Rumble.

Worms Rumble launched back in December of 2020 and has since garnered a very positive rating on Steam. It transforms the Worms franchise from a turn-based strategy game into a real-time, arena-based 32 player shooter. Bazooka Bowl, the upcoming community event, will bring new and old Worms Rumble players together for the chance to win prizes! It will run from Thursday the 25th of February until Monday the 1st of March. Players will be able to access it on PlayStation 5, PlayStation 4 and PC.

What Is Bazooka Bowl

In Bazooka Bowl, players must choose between three teams: the Downtown Dragons, Armageddon Heat and the Golden Donkeys. Each team has their own unique outfit and banner, featuring specific colours so that players can rep their team across the game’s urban arenas. Across the event, players must eliminate their opponents using the franchise-famous bazooka. Any kill completed with a bazooka counts towards a personal and global team score total, regardless of what game mode you’re playing.

Players can win various rewards once the even is over. Should you achieve a high personal score, you could win: a Mech Visor face wear, a white Mech Bazooka skin and a white Mech Suit outfit! Of course, Bazooka Bowl is a community event, so helping your team win is what really counts! There are varying rewards depending on what place your team finishes in. These are:

Where Can You Buy Worms Rumble?

Worms Rumble is available on Steam, PlayStation 4 and PlayStation 5. It’s currently free on Steam until Monday the 22nd of February, so you can test it out before the Bazooka Bowl event begins. It’s also 25% off on all platforms until the 28th of February. If you really enjoy the free trial, then you can pick it up at a generous discount in time for the upcoming event!