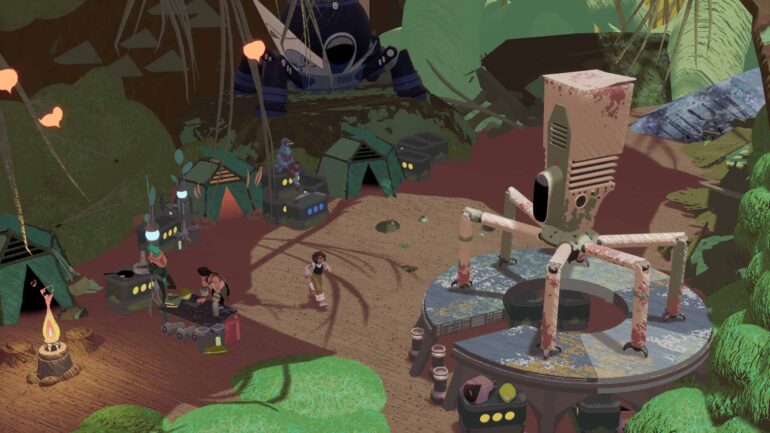 The next game from award-winning indie studio Flight School Studio, Stonefly, has finally received a release date and will be launching on consoles and PC.

Indie studio Flight School Studio and publisher MWM have announced that their chill and tranquil mech-based adventure title, Stonefly, will be launching later this year. Flight School Studio are renowned for their previous game, Creature in the Well. It went on to receive 76% on Metacritic and an 8 out of 10 from Gamespot. Players will embark on a coming-of-age narrative across an enchanting forest in Stonefly, following the heartwarming narrative of Annika. Bohdon Sayre, the game director at Flight School Studio, spoke about their goals to create something totally unique, and their partnership with MWM.

“Our small team set out to create something visually unique and mechanically original with Stonefly and we think players are going to love following Annika’s journey and gliding around the world we’ve created […] We always challenge ourselves to put stakes in the ground outside the norm, and MWM Interactive have been a great partner to allow us the creative freedom to take risks and explore new territory. Stonefly is an ambitious project, different than anything we’ve made before, and a game that we are really proud of.”

Stonefly is a “chill and tranquil” adventure title that follows the adventures of Annika as she sets off to recover a lost family heirloom. She will explore luscious landscapes in her mech, craft new tech and meet a colourful cast of castaway pilots. There is a lot to unpack with Stonefly, so I’ve listed below just some of what you can expect when Stonefly launches later this year:

Stonefly launches this June 1st for PlayStation 5, PlayStation 4, Xbox Series X|S, Xbox One, Nintendo Switch, Steam and the Epic Games Store. If you want to pick it up on the Epic Games Store, pre-orders will soon be available. If you fancy picking it up via Steam, then head on over to its Steam store page to wishlist it and be notified whenever any new information drops. Will you be picking up Stonefly? Let us know down in the comments below.