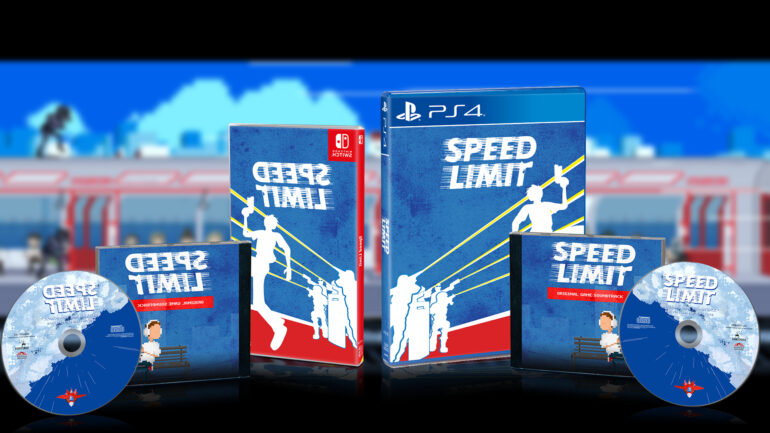 Frantic Action Game, Speed Limit, is Getting A Physical Edition

Frantic, fast-paced action game Speed Limit by developer Gamechuck, is getting its very own physical release on both the Nintendo Switch and PlayStation 4, thanks to Strictly Limited Games.

Speed Limit is a crazy, high-octane, arcade shooter that sees the main character experiencing the worst commute of their lives. It only released a few days ago, but Strictly Limited Games have already announced a physical edition for both the Nintendo Switch and the PlayStation 4 versions.

What Is Speed Limit?

Speed Limit is a mind-bendingly fast-paced “genre-morphing” arcade action game in which players must fight their way through increasingly harder levels. This is a game that will test your mettle and your reflexes all while raising your adrenaline! As you progress through the levels, you’ll encounter different styles of gameplay that better reflect the speed of your vehicle. Start off on a fast moving train and end up blasting through the sky in a fighter jet! Here’s what you can expect from Speed Limit:

If you head on over to Strictly Limited Games’ website, you can pre-order the physical editions for the Nintendo Switch version and the PlayStation 4 version as of the 21st of February. These physical editions will limited, with only 3,300 copies for the Nintendo Switch and 1,700 copies for the PlayStation 4 worldwide! If you want a copy, and you know you do, you’ll have to have fingers on buzzers!

You can purchase the standard physical edition for €29.99. Or, if it catches your fancy, you can get the limited edition bundle! This includes the Speed Limit’s incredible OST and a gorgeous poster and sticker, as well as the game. This will set you back €44.99 and is limited to 700 copies for Nintendo Switch and 350 copies for PlayStation 4. Finally, if you’re a huge fan of Speed Limit, you can pick up an aluminium art card for only €9.99, although these are limited to 149 copies, so you’ll have to act quickly to nab them! You can find all the relevant information at the strictly limited games store.

Will you be picking up a physical edition of Speed Limit? Let us know down in the comments below!