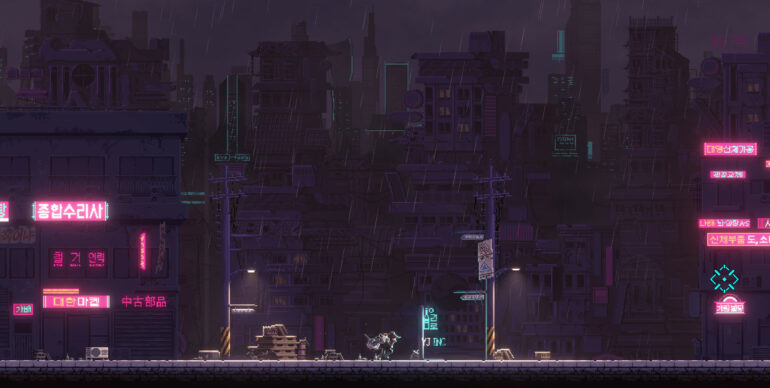 SANNABI: The Revenant is a stylish action-platformer set in a futuristic mega-city aptly named Mega-City. The player must battle their way through challenging platforming segments to uncover the mysteries buried deep within the city. Publisher NEOWIZ have a solid track record of publishing great platformers including Skul: The Hero Slayer and Metal Unit which have gone on to receive 93% and 84% positive ratings respectively. SANNABI: The Revenant, which also adopts a pixel art visual style, seems set to follow in their footsteps.

What Is SANNABI: The Revenant?

SANNABI: The Revenant is a platformer all about speed and whizzing through the various areas you’ll explore. It has a dystopian narrative that complements the gameplay, which reminds me a little of Ghostrunner. You’ll play as a retired military veteran and must uncover a corporate mystery surrounding an unknown entity only known as SANNABI. Here’s everything you can expect when SANNABI: The Revenant drops:

SANNABI: The Revenant doesn’t currently have a release date, nor a price. However, it is receiving a limited time demo as of tomorrow (March 11th). It will be available throughout NEOWIZ’s publisher sale (feel free to check that out as well if anything catches your fancy), which lasts between March 11th and 18th. So, head on over to the game’s Steam store page and wishlist it to get notified whenever an update drops! Will you be checking out SANNABI: The Revenant’s demo? Does this look like the next best platformer? Let us know what you think down in the comments below!