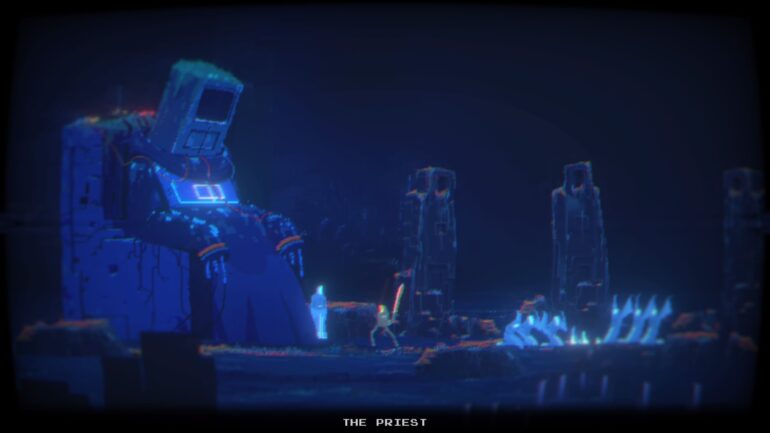 Narita Boy: An Experience Unlike Any Other – PS4 Review

When I was young, my mother took me to see Tron: Legacy. On our way there, she excitedly told me about the time she had first seen the original Tron. In the 80s, for a young and impressionable Parisian like my mother, it was like nothing she had ever seen before. When we left the cinema, my mother asked for my thoughts. I reluctantly admitted I was terrified of 3D and watched the majority of it in a fuzzy state. When I asked what she thought, she said it couldn’t compete with how she had felt seeing the original Tron. These days, playing triple-A titles feels very much the same to me, their fancy visuals merging into one uncanny valley blur. Narita Boy, with its beautiful pixel art style, looks incredible. While it can be difficult at times, it is by far one of the best games I’ve ever played.

“Everything from its visual design, to its consistently incredible depiction of a digital world, feels fully realised and perfectly portrayed.”

Narita Boy has more flowery language than one of my opinion articles. Its narrative is an eclectic amalgamation of religious techno-babble, genuine heartfelt tragedy and an 80s movie trope mash-up. It’s mind-bendingly fantastic, never overstaying its welcome nor relying too heavily on references or sardonic humour. While it can occasionally be over the top, especially with its ludicrous, albeit beautifully written, dialogue, there is a genuine sincerity and a wonderful attempt at telling a terrific multi-layered narrative.

Complementing its general narrative arc is phenomenal world-building. From its visual design to its consistently incredible depiction of a digital world, everything feels fully realised and perfectly portrayed. It was a lot of fun to immerse myself in Narita Boy’s world, if only to see the fantastic ways it depicted the various facets of a computer programme. Talking to every NPC offers detailed information about the world. While some of the dialogue gets lost in the wondrously technical language, the majority of it helps keep you fully immersed in its world.

“Narita Boy is a genuine marvel to behold, and I had to stop almost every minute to capture a screenshot.”

While Narita Boy does have an incredible narrative, its visuals and soundtrack are where it excels the most. It replicates the 80s aesthetic incredibly well, not just in its excellent use of colour and nostalgic iconography but also in its feverishly techno-nightmare world. It doesn’t just borrow from the likes of Tron but is reminiscent of the works of Jean Giraud, among others. This doesn’t feel like a game attempting to emulate the past; rather, it creates its own unique, albeit inspired, identity. Narita Boy is a genuine marvel to behold, and I had to stop almost every minute to capture a screenshot.

Narita Boy’s soundtrack is perhaps one of the best video game soundtracks ever made. Its tracklist covers everything from the deeply emotional to the bombastically epic. It’s constantly matching each scene’s tone perfectly, ensuring to never entirely manipulate your emotions. Instead, it perfectly resonates with and accompanies the unfolding events. Some of the best tracks include Techno Sword, Synth Sensei, Riding the Servohorse and Dragon. Salvinsky has created the perfect soundtrack for Narita Boy’s 80s infused fever-dream. I can guarantee you I will be listening to it nonstop over the ensuing months.

“While combat can be a spectacle to behold, the brutal difficulty coupled with the difficulty in recovering health, makes the game painstakingly difficult to get through.”

Unfortunately, all good things must come to an end. While Narita Boy is superficially incredible and narratively phenomenal, its gameplay mechanics and general gameplay loop often leave much to be desired. Initially, Narita Boy is an enticingly enjoyable mix of fast, fluid combat, and deep puzzles. Unfortunately, Narita Boy introduces too many enemy types and involves too much backtracking that it quickly grows stale.

Narita Boy’s combat is gratifying, and even by the end, I still found myself engrossed. It’s often an energetic rollercoaster of taking out waves upon waves of increasingly difficult enemies, all while attempting to avoid as much damage as possible. Unfortunately, while its enemy design is incredibly original and plentiful, the abilities you unlock across the course of your journey never match up against them.

Initially, I found myself figuring out which moves were most effective against which enemy. However, the frankly obscene amount of enemy types means you’re often relegated to using the same abilities against all types, regardless of how they interact with you. Fights were often brutally unfair as a result. While combat can be a spectacle to behold, the brutal difficulty coupled with the difficulty in recovering health makes the game painstakingly difficult to get through.

“I love Narita Boy, I’m just aware that not everyone will be able to overlook its shortcomings.”

Platforming in Narita Boy is mostly functional, but it can often be a little floaty. The character model will leap towards a platform, but upon landing, slide just a little. This caused me to fall off narrow platforms or miss them altogether. Certain jumps, regardless of whether or not they land vaguely near a platform, may clip through them. Narita Boy won’t grasp onto the edge of platforms, so jumps have to be incredibly precise. While it’s never an arduous chore to go through, platforming never felt as fluid as it should have and was often all too inconsistent. It doesn’t help that you have to backtrack through certain areas repeatedly, which not only spoils the visual spectacle of each area but makes it a slog to progress through the narrative.

Narita Boy is an incredible experience, but some inconsistent gameplay, unfortunately, mars it. It offers an experience unlike any other, one born from sheer, unadulterated creativity. To explore its spellbindingly arresting world feels like an honour. To gaze upon its incredible landscapes while listening to its fantastic soundtrack is a never-ending joy. It is just a shame that its gameplay, while never terrible, can’t be held up to the same regard. I love Narita Boy; I’m just aware that not everyone will be able to overlook its shortcomings. 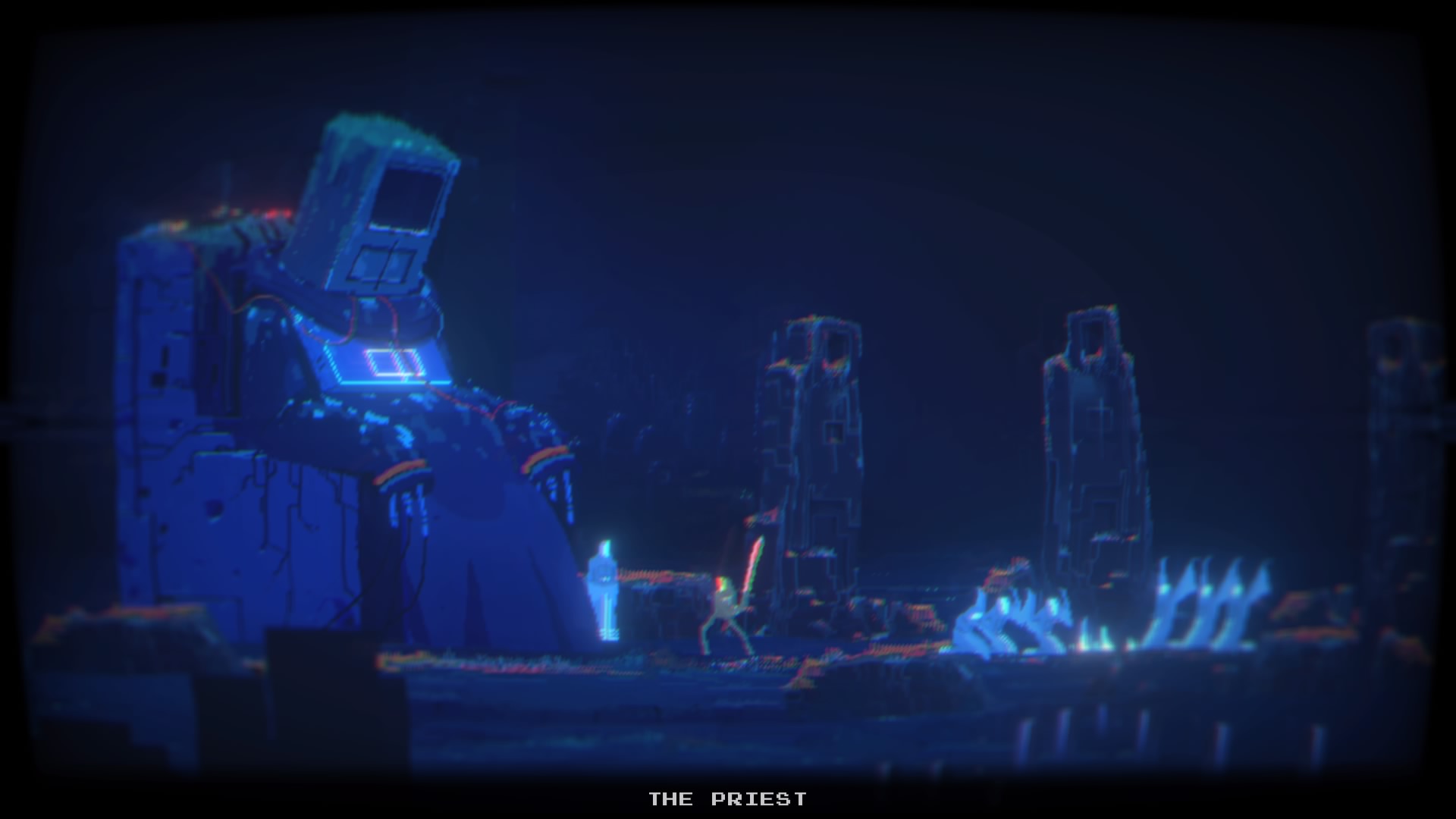 Narita Boy Review
Summary
Narita Boy is a phenomenal game and one of the best games I've played in a long while. It is as great as I had hoped it would be. While it can often be a little too punishing, and its platforming a little inconsistent, its incredible visuals, fluid combat and genuinely heartfelt narrative make up for it. This is an absolute must-play if this looks even remotely enjoyable to you. It is a truly one of a kind experience and sets the bar rather high for those left to come.
Pros
Incredible Visuals & Soundtrack
Franticly Fluid & Fun Combat
Great Narrative & World Building
Cons
Inconsistent Platforming
A Little Too Much Backtracking
Brutally Difficult At Times
8.5