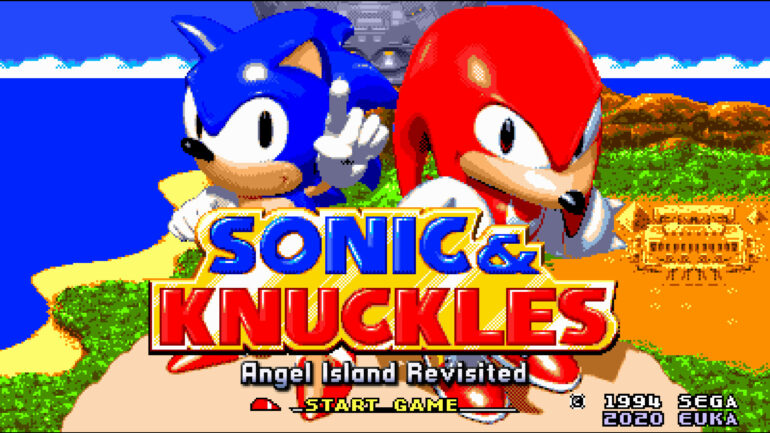 Musings on Sonic and Knuckles

Video game fans in general are known to be a contentious lot. This shouldn’t be that surprising. Whenever groups of people come together who like the same thing, they are going to like it for different reasons. As a result, you get fans of a video game franchise who hop on the bandwagon at different times. They fall in love with different things, and thus you get disagreement about what the “true” version of a particular video game series should be. Unfortunately, fans of Sonic the Hedgehog have a notoriously bad reputation for being vocal and disagreeable.

The one thing most Sonic fans tend to agree on is that the Genesis era games are good. But even here, you get disagreement over which Sonic game of that time period is the best. Most fans tend to be divided over whether Sonic 2 or Sonic CD is the pinnacle of the series. There are people who debate whether the combined Sonic 3 and Knuckles is superior to either of these. And there are those who feel that the original Sonic the Hedgehog is the best and that they’ve only been going steadily downhill since then.

I do have a very strong opinion on which Sonic game was the most important in my life, and which one is my favorite. But to understand why that is, you’re going to need a little context on my life.

So, I am the youngest of three children. My sister is around five years older than me, and my brother is a little less than two years older than me. The overwhelming majority of my cousins are also older than me (ranging from about a year to a decade older). While all of my siblings and cousins were nice to me, especially considering how much of a whiny little snot I was, the fact that I was the youngest of us meant that, whenever we were playing ANYTHING together, I tended to get last pick of characters.

I remember vividly visiting a set of my cousins one time, who had some friends over. We were going to play Ninja Turtles in the backyard, and we were picking characters. There were five of us. This basically meant that my brother, my cousins, and their friend picked all the Ninja Turtles, and I was going to be stuck playing as April. This annoyed me, because when you’re a five year old boy, you don’t want to be stuck playing as the damsel in distress. But that was more or less my lot in life; if there was a sidekick when we were playing pretend, or an undesirable character, odds were pretty good that I would wind up playing as that character.

Not long after, some friends and relatives introduced me into these things called “video games”. They were these neat doodads that you could plug into your TV and make really cool characters do things on them. However, it was quite some time before my family got a major console. I think I was either in my teens or approaching them before we did. So whenever I wanted to play any of the cool Nintendo, Super Nintendo, or Sega Genesis games that my friends had, this meant I was pretty much relegated to being player two (or watching).

As an adult, there are things about all of them that I find cool, and interesting. But when you’re a kid, you always want to be the cool, heroic guy, just once. And none of those player two characters really had the same “cool” factor that the hero does. While Tails can fly, he doesn’t have that same edgy, bad boy, in your face attitude that Sonic does. And I played these parts so much that, even to this day, I tend not to think of myself of the hero, even of my own story.

It was in the mid-Nineties when that changed.

My neighbor, the one in Cul-de-sac who had a Sega Genesis had rented a game, and he wanted me to check it out with him. It was a sequel in a series that we both enjoyed. We popped the game into the console, and were greeted by the customary “Sega” scream. As that faded, we were face to face with the players of this game. One of them was familiar; the blue, spiky, punk visage of Sonic the Hedgehog all too ingrained in our seven-year old minds at the time. The other character, however, was something new, something different. His red coloration contrasted with Sonic’s blue, and his dreadlock style spines were a cool new look. His hard-soled shoes and rugged fists conveyed a more rough and tumble image than Sonic.

No, get back here, I’m being serious.

In previous games that I played, additional playable characters were definitely touted as inferior to the hero, less cool, regardless of if they played that way or not. In Super Mario Bros. 2, even though the characters other than Mario are arguably more useful, they aren’t the hero of the story. Even though Tails can fly, he doesn’t have the courage or attitude that Sonic does, he’s not as cool. He’s just a little kid tagging along on Sonic’s adventure. Sonic and Knuckles SHATTERED that world view. Knuckles wasn’t a sidekick, he wasn’t a player two. He was very much his own character, on his own adventure.

If you open up Knuckles’ adventure in Sonic and Knuckles, you’re greeted by a short cutscene where Knuckles is relaxing in the forest, and unceremoniously attacked by robots. He then decides he’s going to get the jerk who ruined his nap. Sure, not the most heroic motivation in this case, but it is of his own volition. He’s not tagging along on anyone’s adventure, and he doesn’t NEED anyone to be the hero for him. He would take care of this mess himself, thank you very much!

Additionally, there’s Knuckles’ design as well. Tails was very much created as a little brother to Sonic. He’s younger, shorter, cuter, in need of guidance from his pal Sonic. Knuckles, on the other hand, is clearly modeled as a peer to Sonic. In fact, in his early appearances, he was set up to be Sonic’s rival. As such, he looks to be a similar age and size as Sonic, and, instead of being made to resemble a little kid, looks like another cool teenager, like Sonic. Sure, he may have a different attitude and motivation, but he is another character who was designed to be cool.

And of course, there was Knuckles’ game play as well, his powers. Sure, he wasn’t quite as fast, nor could he jump as high as Sonic, but he had this neat gliding ability, and could climb up walls and break rocks with his great strength. He’s similar enough to Sonic to not change the gameplay or imagery drastically, but different enough to be a whole lot of fun and change the way you think about the game.

Obviously, I was instantly a fan of the character. Here was a character who, while not the main one, wasn’t designed to be subservient to the main character. He was just as heroic, just as powerful, and just as cool in his own way. For the perennial sidekick, the introduction of Knuckles the Echidna was incredibly liberating. Sure, while I still wasn’t likely to imagine myself as the main hero of the games I played, or even in my life, it was okay. I could now imagine myself as that other cool, independent side hero. The one who, while he may not always be tagging along at the hero’s side, could be counted on to help save the day.