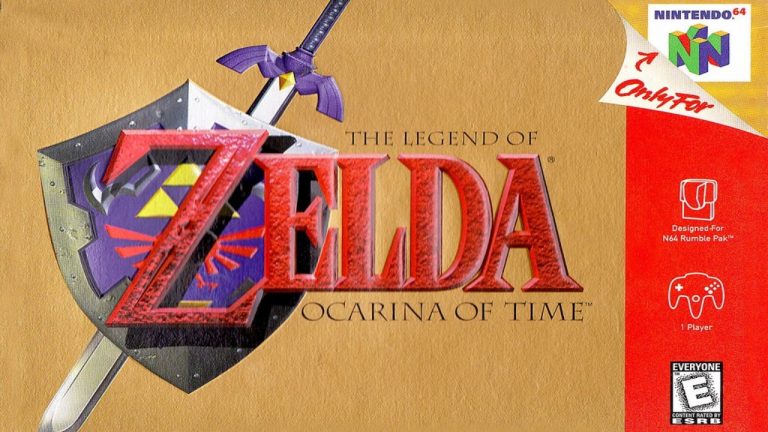 Musings on The Legend of Zelda: Ocarina of Time

The Legend of Zelda: Ocarina of Time has recently turned 22 years old. Even after all these years, it remains one of the highest-rated video games in history. If you talk to Zelda fans out there, there’s a reasonable chance that they’ll tell you that Ocarina is their favorite entry in the series. Despite debate in recent years, people love this game.

It has been a long time since I have personally played it. Frankly, I can’t remember if I still have a copy stashed away somewhere or not. But, with Age of Calamity coming out, Zelda has been on my mind lately, and for some reason, Ocarina especially so. And for those who haven’t played it, we have previously completed a “Retro Review” of the game from the perspective of someone who has never played it.

So, in 1998, I was about 11 when Ocarina came out. Gaming, in general, still wasn’t quite as widespread as it is now. Most of the people I had known with consoles at that point (which wasn’t a large number of people) had owned the Sega Genesis. A small handful had picked up the Super Nintendo. And at that point, I think precisely one of my friends had this fancy gaming widget known as the Nintendo 64.

Along with the N64, my neighbor had gotten a subscription to the magazine Nintendo Power to see what new and exciting games would be coming out. While Nintendo Power wasn’t remotely new at this point (having existed since the NES days), it was new to me. Seeing what games were in the pipeline, getting reviews ahead of time was a mind-blowing experience. Before that, during the 16-bit era, my friends and I watched TV to see what games were coming out, and then either rent or buy them and hope for the best. But now, we could see what was on the horizon, get a little preview, and make a decision based on that.

In the age of the internet, it almost feels silly to write that. “What? Buying a game while knowing absolutely nothing about it? No reviews? No Metacritic scores? How deliciously absurd!” But that’s the way it was. Of my friends, I was the only one who had access to the internet (via AOL Dial-up), and there weren’t substantial review sites that were easily accessible to small children.

At that point, if we wanted previews on games, print magazines were the way to go. And I do vividly remember waiting to see when my neighbor wound up with a new copy, both of us dying to know what lay in the future for his N64.

And, much like you may take the idea of easily accessible reviews and previews for granted, you probably take it for granted that a Zelda game will automatically be a mega-hit and that it was always super popular. While Zelda has always been one of the more prominent names on Nintendo’s side, back in those days, not many of the Nintendo fans that I knew had copies of Zelda games.

For the NES, I think I knew two people who owned the original Legend of Zelda. I don’t think any of the SNES owners I knew owned a copy of A Link to the Past. And as (at that time) I was the only one I knew with a Game Boy, I wound up being the only one with Link’s Awakening until the release of the GBC version later, and that was mostly in response to the hype for Ocarina. In the world of most of my friends, Zelda was kind of under the radar.

This brings us to Ocarina of Time.

It was around 1997 that Nintendo started trying to build up hype for Ocarina, and Nintendo Power wasn’t excluded from this. Since N64 releases were relatively few and far between, when Nintendo began to push one, well, my neighbor and I noticed. And Ocarina was a game they were pushing. I remember my neighbor showing me some of the early previews in an issue of the magazine. My reaction was somewhat lackluster, but it wasn’t long before ads started showing up on television as well. And my neighbor and I agreed: Ocarina of Time looked like one heck of a game.

And we indeed weren’t the only ones to notice it. In 97, my neighbor was the only person I knew with an N64. By 98, that would no longer be the case. While it’s a matter of historical record that the Playstation wound up being the best-selling console of that generation, among my friend group in Spotsylvania County, the N64 ruled the roost. And it was pretty much all-in response to Ocarina of Time. When Smash Bros. came out, most of my friends would wind up being Link mains, and I think in 1999, three of my friends dressed up as Link for Halloween. The game made a massive impact.

While other 3D games indeed existed by then, they weren’t as common among my friend group. Again, none of my friends had gotten the Sony Playstation yet, and at that point, my neighbor was the first one with an N64. Suddenly, we had this big adventure that felt more mature than, say, Super Mario 64. Sure, it’s still a Nintendo game and a very family-friendly one, but it tells a much darker story than many other Nintendo games at the time.

It certainly felt much more significant in scope too. While it’s still not an overly complicated narrative, I’m having trouble thinking of a first-party Nintendo game that was quite as cinematic in scope as Ocarina was when it first came out. And while the game isn’t as big or as open as Breath of the Wild wound up being to a bunch of eleven-year-old kids in the ’90s, it certainly felt that way. The various hidden grottos, the mini-games, the Skulltula side quest, and even just the core dungeons made you want to explore the gigantic world.

While there are plenty of iconic moments that people remember from this game, there are two that stick out in my memory more than others. The first one that I remember is getting the “Master Sword” in the Temple of Time. This wasn’t the first time the sword showed up in the series’ mythology, but it’s the trope codifier for the moment. You and the young Princess Zelda have a plan to prevent Ganondorf from getting the Triforce. You’ve traveled through three dungeons and gathered the Spiritual Stones to prove that you are worthy of going to the Golden Land, acquiring the “Master Sword,” and are ready to take on the evil king of the Gerudo. You pull the Sword of Evil’s Bane from the pedestal…

What Microsoft’s Acquisition Of Activision Blizzard Means For The Future

And destiny respectfully disagrees. Sure, you may be the destined hero. But not yet. Instead, you are held in stasis for seven years. And in that time, Ganondorf conquers Hyrule and manages to get a third of the Triforce. It is up to you, in this time, and this place, to battle evil. Not as a boy. But as a man.

This leads to the second big moment that I vividly remember in the game: the ascent of Ganon’s Tower. You’ve now gone through several dungeons, rescued the Sages, and acquired the Medallions. Solving puzzles and using the power of the Sages, you begin your assault on Ganondorf’s home base, his fortress. You are going to fight evil where it lives. You make your way through a variety of puzzles and enemies and make your way to Ganondorf’s Inner Sanctum. He is sitting there, playing the organ, the captured Princess Zelda floating overhead. And he turns around.

He is not surprised by you coming. He has been waiting for you. You freed the Sages, defeated his minions? And Ganon accounted for all of it. This attack on him is not a surprise. Just another endpoint of one of several plans he made. Because, thanks to you luring Princess Zelda out of hiding, and thanks to you attacking his castle, he now has all three pieces of the Triforce in one place. And he fully intends on pulling the Triforce of Courage from your cold, dead hands.

While the Dead Man’s Volley boss mechanic is something that has shown up a lot in Zelda at this point, I remember how epic it felt to me as a kid. Here was this climactic final duel with the King of Evil, the wielder of the Triforce of Power, and part of the way that you actually hurt him is by using his own magic against him, combined with the divine blessing of the Light Arrows and the evil-sealing powers of the “Master Sword.” It was intense, it was cinematic, and I loved it.

At the end of the fight, Ganondorf decides to bring you down with him by collapsing the tower on top of you, forcing you to flee. And when that doesn’t work, he pulls out all the stops by becoming the iconic and monstrous Ganon form. Only by defeating this giant porcine beast can you finally seal him away and save Hyrule.

This game left a significant impact on me. While I wouldn’t describe it as my favorite video game, or even my favorite Zelda game, I certainly don’t begrudge people who do call this their favorite game. It was the first 3D Zelda, and it felt more extensive than any Zelda game that came before it. It cemented Zelda as one of Nintendo’s most important franchises and showed that Zelda could be as big a system seller as Mario. And people still love it. ROM hackers have found a way to breathe new life into this game for veterans by creating various randomizers, forcing experienced players to figure out new and exciting ways to journey through the game.

Still, with how old the game is, it isn’t necessarily the easiest to track down and play anymore. Currently, the official way to get it would involve finding a cartridge for the 3DS remake. With Nintendo winding down on official support for the 3DS, that’s looking to be harder and harder. But, given that Zelda’s 35th Birthday is coming up in 2022, I wouldn’t be surprised to see Nintendo do something to commemorate the series. And what better way to celebrate the series than with one of the most beloved games in the franchise? Whatever they plan, I look forward to eventually sharing the experience of this game with my girlfriend. And I hope that all of you will be able to share the experience of this classic game with others for many years to come.