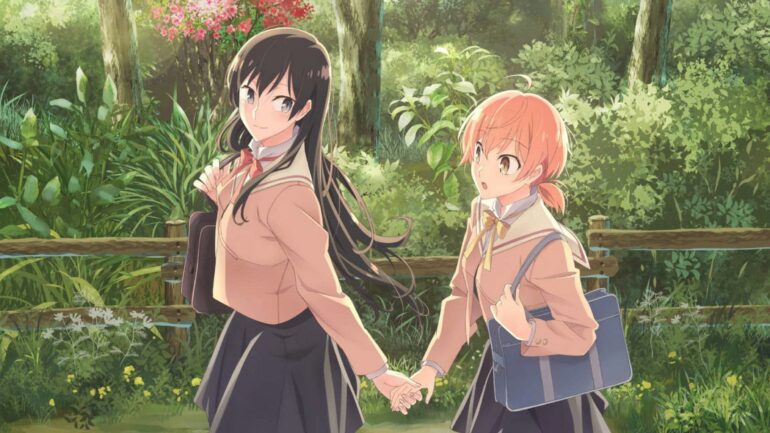 I’ve said this before, and I will say it again: I’m a huge yuri fan. Since there still isn’t a large number of anime that show girls in love, it goes without saying that I read a lot of yuri manga. My shelves at home are lined with it. And it’s no coincidence that the majority of my shoujo-ai manga was published and translated into English by Seven Seas Entertainment.

And so, this is my love letter to them! Recently, a lot of yuri manga has been released in the US by different manga publishers. Sweet Blue Flowers from Viz, A Lily and A White Kiss from Yen Press, Yuri Is My Job from Kodansha, Yuri Bear Storm from Tokyo Pop… and much more. The manga North American industry is starting to become a yuri fan’s dream. And I love it 😀 But it wasn’t always like this.

Seven Seas started publishing yuri manga way before any other big American manga companies. Back in 2006, it announced its yuri manga line STRAWBERRY, which included the now classic Strawberry Panic, as well as the The Last Uniform and Tetragrammaton Labyrinth. It also released the Strawberry Panic light novel, which is the very first yuri light novel ever to be published in English if I am not mistaken.

As time has passed, it has licensed and published even more yuri titles. Whoever made this decision… I can’t thank you enough. Being able to legally read all of these stories about queer girls is truly amazing.

I didn’t start buying Seven Seas’ work right away, though. In 2006, when they started the STRAWBERRY line, I was in high school. While I was a big anime and manga fan, my main obsession was rock music, most notably My Chemical Romance. I started to become more involved in Japanese media when I went to undergraduate school, but I didn’t fully discover my passion for yuri manga until I saw the Girl Friends omnibuses in Barnes & Noble. Right there, smack right on the cover of Volume 2, were two girls practically kissing. I hadn’t seen something so overtly gay on a manga cover before, and it instantly caught my attention, since I’m queer and female.

And I was instantly hooked. This, of course, is mostly due to the fact that its mangaka, Milk Morinaga, is brilliant. (We still desperately need a Girl Friends anime!) However, I may have never been exposed to her work if it wasn’t for Seven Seas Entertainment translating it and distributing it. After Girl Friends, I bought more of Morinaga-sensei’s work from Seven Seas. Then I bought the Strawberry Panic manga and light novels… and then I just kept buying more and more.

My collection as well as my passion for yuri has continued to grow to this day, partially in thanks to Seven Seas. Besides classic girl love series, they have been a key player in publishing more well-known manga titles, such as Citrus and Bloom Into You. I have to say, they have excellent taste – or maybe an amazing sixth sense – when it comes to licensing yuri series that cause a stir.

Although I love the popular yuri series, they have also released lesser-known one-shots about girls love, such as Now Loading, Beauty and the Beast Girl, and Mushroom Girls in Love.

But besides just shoujo-ai love stories, Seven Seas has published other important LGBTQ comics, such as My Lesbian Experience with Loneliness and its sequel My Solo Exchange Diary. I love Nagata Kabi; her work is extremely important. I am so glad I was able to read her work in English and see everything she has gone through. Thank you, Seven Seas! And also thank you for publishing The Boy Was A Bride. I was so happy to see a positive representation about a trans girl.

And it’s not just the yuri and LGBTQ stuff. You’ve published many of great works as well. I never thought the Tenchi Muyo light novels would ever be published in English during my lifetime. Then there’s the different Index manga series… Non Non Biyori… Ancient Magus Bride… and so much more.

To sum it all up, Seven Seas Entertainment, thank you for being a forerunner in spreading yuri manga everywhere ❤ It means the world to us GL fans. Keep up the good work because I am going to keep reading – for years to come.

P.S. Don’t be jealous other manga and light novel publishers. You have all done great work too!

For more reviews like this, check out Rai’s Anime Blog!