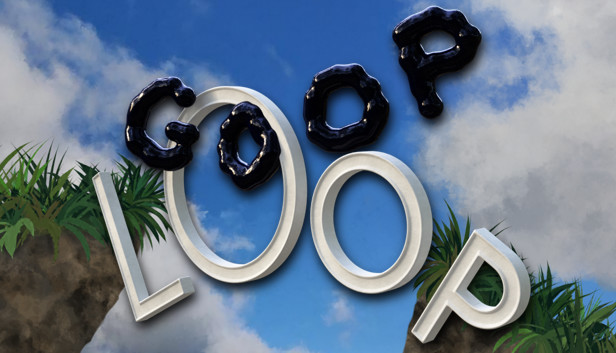 In ancient Greek mythology, there is a tale of a man named Sisyphus. Once the king of Corinth, he was condemned by Zeus to roll a boulder up the depths of Hades as a punishment for cheating death. He would move the boulder all the way up to the very precipice of the hill, sweat dripping from his brow, his arms aching from the strain. Then, just as he was about to push it over the top, he would watch as it rolled all the way back down. Playing Goop Loop is a little like stepping into Sisyphus’ shoes, only it’s fun, in no way a punishment, and almost definitely involves the same amount of swearing.

“I tried, tried and tried again, each time failing, watching as the timer ticked away.”

You play as Goopie McGoopington (not the official name, just one I gave the little guy), a small, black, amorphous blob of goop, that has found itself forever trapped within a giant stone wheel. It’s your job to guide the little fella up and down cliffsides, in the hopes of perhaps one day reaching the summit and letting out an exasperated sigh.

Goop Loop threw me for a loop at first. Initially, I was determined to overcome the obstacles before me. With each failure I found myself cracking my fingers, smashing the spacebar a little too hard, and watching as my sweating, farting Goopie desperately tried to push that cumbersome wheel up the hill. I tried, tried, and tried again, each time failing, watching as the timer ticked away, a constant reminder that not only was I failing, but I was doing so perpetually.

“My determination, my desperation, my anxiety, it all stopped.”

It felt as if I would be stuck forever, trapped between two cliffsides, my wheel only ever reaching the very tip of the cliff, before rolling all the way back down. I realised how Goopie must feel, stuck in his wheel as I push him to his very limits, sweat dripping down his slimy form. In a way, it reflected my current situation, stuck in my apartment, wasting away the hours as I receive rejection after rejection from potential employers, waiting as my Government fumble about, trying their best to prevent what is probably the worst thing that’s happened in my lifetime.

But then it all stopped. Goopie didn’t, and the wheel certainly didn’t. Heck, the scenery didn’t. I was still pushing Goopie up the same hill, and still falling back down achieving nothing. The clock still ticked away. The frost still crept up my window as some poor guy tripped on the ice outside. The world still kept churning, the seas kept flowing, and the wind kept blowing. But my determination, my desperation, my anxiety, it all stopped.

“But after I shouted at Goopie for the hundredth time, I learned patience.”

For the remainder of my time with Goop Loop, I just chilled out. I watched as Goopie finally ascended the cliffside with a gleeful smile. I felt a sense of pride, like a parent watching their child go to school for the very first time. I then tried and failed for a good 30 minutes to overcome the next obstacle, and then after that, I tried the next hill and failed for an additional 30 minutes. But it was fine. I had experienced a cathartic release and was now playing in a blissful state.

Goop Loop is stressful, and hard, for the first ten minutes. It boasts about it on its Steam store page, saying that you’ll “fall back down and lose a bunch of progress, probably.” But after I shouted at Goopie for the hundredth time like I used to shout at my Pokémon begging them to recover from confusion, I learned patience.

“Goop Loop isn’t about beating the game or getting to the top. It’s about trial and error, it’s about relaxing”

I still haven’t completed Goop Loop, and I’m not all that convinced I ever will. But I don’t see this as a fault. For me, Goop Loop isn’t about beating the game or getting to the top. It’s about trial and error, it’s about relaxing, it’s about learning patience, and it’s about having a good time with Goopie. I’m happy to admit that I’m bad at Goop Loop because I don’t really care. But whenever I’m not playing Goop Loop, I want to be. And whenever I am, I feel at ease.

After I overcame what was, for me, the most challenging obstacle by far (the developer will likely laugh at how long it took me to beat), I just put a podcast on and carried on playing. It didn’t bother me it had taken so long because I’d had fun doing it. And despite knowing that what lay before me was undoubtedly going to be just as hard, I burnt through my whole day playing Goop Loop. I found that the more I played, the more it became a state of mind. I became one with Goopie, and Goopie became one with me.

Goop Loop has a lot going for it outside of its ability to make me all philosophical about life. For the most part, it’s a good looking game, and ol’ Goopie himself looks great bouncing from side to side. The narration that will occasionally play is funny and witty, and I found myself playing on, trying to overcome all odds, just to hear more of it. When I didn’t have a podcast on, its sound design is solid, especially all the squelches that play as Goopie bounces around.

Goop Loop Review
Summary
At first, I thought that Goop Loop wouldn't be for everyone. It can be stressful initially, but letting yourself get sucked into the rhythm of pushing a little blob of goop around can be incredibly addictive. It's a good-looking game that's dirt cheap, at only £1.69, and as it's in early access, there's some additional stuff coming in the near future. It's well worth checking out, as I think Nathan "Jitspoe" Wulf did an incredible job of making feeling like Sisyphus a lot of fun.
Pros
Incredibly Cheap
Addictive
Simple
Cons
A little stressful
Frustrating
Very Challenging
8
Great