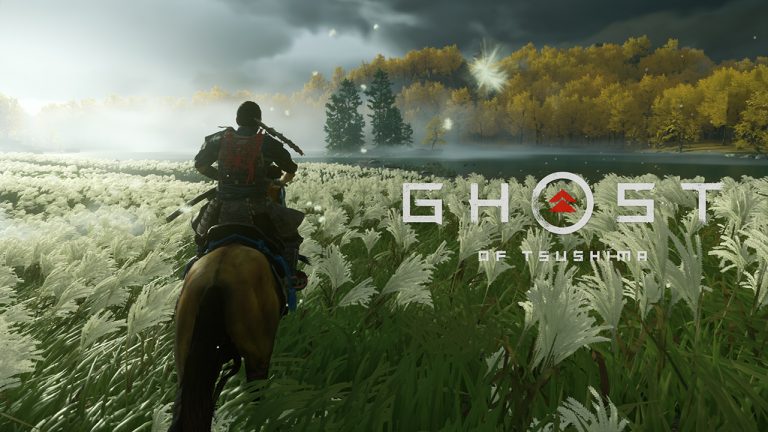 Ghost of Tsushima, at first glance, feels familiar. You level up, which allows you to complete a skill tree and unlock abilities. All the while completing a storyline with side quests, landmarks, and outposts scattered throughout the world. Yet, no matter how recognisable Ghost of Tsushima seems, I can’t help but feel the urge to play more and more.

Set in the 13th Century, the Mongol empire is invading Tsushima, an island off Japan’s mainland. General Khotan Khan, the Mongol Empire leader, has taken everything from the main protagonist, Jin Sakai. In a devastating fight on a beachfront, the Khan slaughtered the samurai leaving Jin as the only one left to defend the island. In the process, Jin’s uncle, Lord Shimura, is captured and held captive by the Mongol Empire. Ghost of Tsushima focuses on Jin’s journey as he attempts to reclaim his home while being torn internally between being a samurai and being a ‘ghost.’

“The pace in combat is second to none.”

Throughout history, the way of the samurai was to fight with honor. This is noted time and time again during the game. However, the way of the ‘Ghost’ is to be unseen, silent, and stealthy. Ghost of Tsushima plays on both sides of the fence brilliantly. Approaching combat situations, you decide whether you want to take the enemy head-on or be sneaky. A standoff is the ‘Samurai’ approach to fighting. Activating a standoff as you meet enemies puts you in a situation reminiscent of an old western stalemate. First, one to strike loses. This gets the heart racing as you try to come out alive and take out multiple enemies as they rush in to defend their fallen companion.

As the ‘Ghost’, you approach situations with stealth and takedowns. The game even uses the assassination sequences to trigger cut scenes. This gives you insight into Jin’s childhood and his growth into becoming a respectable samurai. If the enemy notices you, they will blow their horn to alert reinforcements, forcing you to fight in open combat.

The pace in combat is second to none, offering four stances to take on different enemy types. As you come across an enemy with a sword, you switch to the stone stance to counter and deal the most damage. Changing stances is critical. I found myself not utilising it until the end of the game, and it was one of the biggest mistakes I made while playing.

“Duels brought out my competitive instinct and desire to see the carnage.”

The parrying and dodging system feels like an element borrowed from the Witcher, but Ghost of Tsushima perfects it. When you block an enemies’ strike at the last minute, you get a ‘Perfect Parry.’ This is so satisfying. The game slows down to emphasise the dramatic slash cutting through your enemy, making you feel like you’re in the front seat of a cultivated Akira Kurosawa film.

The Kurosawa film elements are referenced throughout the game numerous times. None more prominent than the duels. Dueling an opponent looks like it comes straight out of the Seven Samurai. Beginning with a poised stance to instigate, you must defeat your opponent in a one on one fight. This is where dodging and parrying are vital for survival. I quickly realised striking early was punishable. Like the sparring scene from the Seven Samurai, a perfect parry became my recipe for victory. Duels brought out my competitive instinct and desire to see the carnage. Anytime I discovered a duel, I immediately had to complete it, no matter what I was doing.

Throughout the Ghost of Tsushima, I would find myself getting distracted during quests. I would ride my horse through the gorgeous scenery before spotting a fox and chasing after it to reach a shrine. Or I would see a bamboo strike and reminisce about the countless times I would smash buttons while entering cheats in Grand Theft Auto: San Andreas. The island of Tsushima offers an abundance of things to do, and I never wanted to put the controller down.

“The weather reacts dynamically to the player.”

In the Ghost of Tsushima, you meet characters that will help you defend the island from Khotan Khan and the Mongols. Each character has a journey for you to play through to understand more behind the name. Some of these quests are even better than the main storyline itself. Ishikawa’s Tale follows a story of betrayal, beginning with Ishikawa’s apprentice joining the Mongols and murdering the natives on Tsushima. The story contains multiple plot twists, and never knowing who to believe; I was on the edge of my seat. This happened with every quest. It was always hard to predict the direction the game was heading. Although I never believed any of the main characters were going to die. I started to get attached to side characters, and that’s where the worries began. The game is well written and utilises gameplay aspects to help tell its story.

The weather also reacts dynamically to the player. You unlock four different songs that are playable on the flute as you progress through the game. Each piece will have a direct impact on the weather. If you want it a storm to happen, you play Lament of the Storm. This wouldn’t be a big deal in a regular game, but in Ghost of Tsushima, weather can help you stay undetected. While storms or fog are prominent, Jin is less likely to be detected by Mongol forces. I only used this as a scapegoat after dying a few times, but this isn’t the only way the weather affects gameplay.

“Ghost of Tsushima is one of the most visually appealing and beautiful games to have ever existed.”

If you aren’t fighting with honour, the weather adapts to your style of play. You play like the Ghost, storms will break out, and lightning lights up the sky. You play like a samurai, the sun will shine, and the birds will chirp. This had a direct impact on how I played the game. Once I realised this was going on, I was more likely to fight with more integrity and wasn’t going behind the opponents’ backs. The game is way too vibrant to have it spoiled with lousy weather.

Ghost of Tsushima is one of the most visually appealing and beautiful games to have ever existed. The game features a fast travel system, allowing you to travel to any landmark on the map in a couple of seconds. Except why would you want to? From the Golden Temple with yellow leaves falling like rain to the scorched charcoaled remains of a once luscious green forest, Ghost of Tsushima has it all. The game encourages wondering, inspiring you to travel to the map’s far-distant corners to see how vibrant and unique the land is.

When the sun is out, the Ghost of Tsushima is at its peak. Camera mode is a staple feature and my favorite part of the game. I couldn’t stop activating story mode in every new area I came across. Camera mode allows you to change every aspect of the game as if you are right there in Tsushima. You can adjust shutter speed, exposure, particle density, wind speed and direction, the weather, and even Jin’s emotion on his face. If you want to take a video, the game also offers music from the OST to accompany it. This is one of the most immersive experiences and should be included in all triple-A games in the future.

We have all heard that PlayStation 5 will feature fewer load times and no loading screens. But right now, Ghost of Tsushima features little to no load times on the PS4 Pro. Fast traveling from one side of the map to the other, I was left dumbfounded at how short the load times are, keeping you engaged and glued to the screen.

Ghost of Tsushima is motion captured in English. This is one of the most significant disadvantages for those wanting to play the game in native Japanese. Being mo-capped in English, there isn’t lip-syncing available for Japanese. The English voice acting doesn’t feel right. It’s like watching a dubbed anime set in Japan with Japanese characters, but they speak basic English with no expression.

“As Ghost of Tsushima takes inspiration from Kurosawa, you can play the entire game in black and white.“

There are a few minor glitches in Ghost Of Tsushima. A few times, I accidentally fell off a cliff (whoops!) to land in a location where I wasn’t meant to be. Unable to move or do anything to get out of the current situation, I restarted to the latest checkpoint. I’m sure over time, Suckerpunch will provide patches and fixes to some of the glitches, but at this point, it is a minor inconvenience.

Akira Kurosawa was a Japanese film director and screenwriter and is one of the most influential filmmakers in cinema history. Kurosawa mode is Ghost of Tsushima’s tribute to his incredible career. As Ghost of Tsushima takes inspiration from Kurosawa, you can play the entire game in black and white.

Emphasising monochrome imagery, Ghost of Tsushima is brought closer to its cinematic inspiration of samurai cinema. It feels like you’re back in feudal Japan and highlights the world around you. 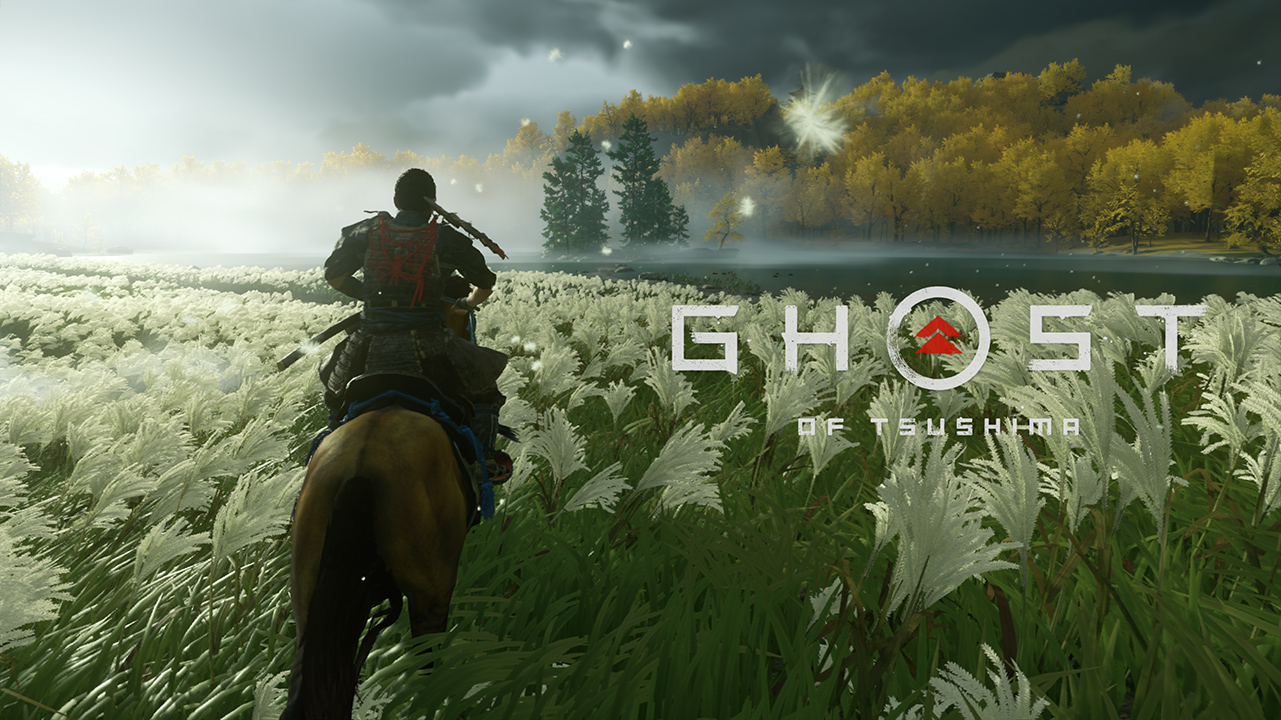 Ghost of Tsushima Review
Summary
Ghost of Tsushima is a perfectly constructed work of art only let down by minor details. The addition of the camera mode to immerse yourself in the breathtaking world is phenomenal. With endless quests and locations on the map, the game feels polished. The ever-changing environment keeps you questioning during the exhilarating combat. The additional tribute to Japanese film culture invites you into the game. Despite the lip-sync not matching up and minor glitches, Ghost of Tsushima is the perfect game to end sony's PlayStation 4 dominance.
Pros
Stunning World
Exhilarating Combat
Immersive Narrative
Cons
Minor Glitches
No Japanese Lip-Sync
9.5
Amazing