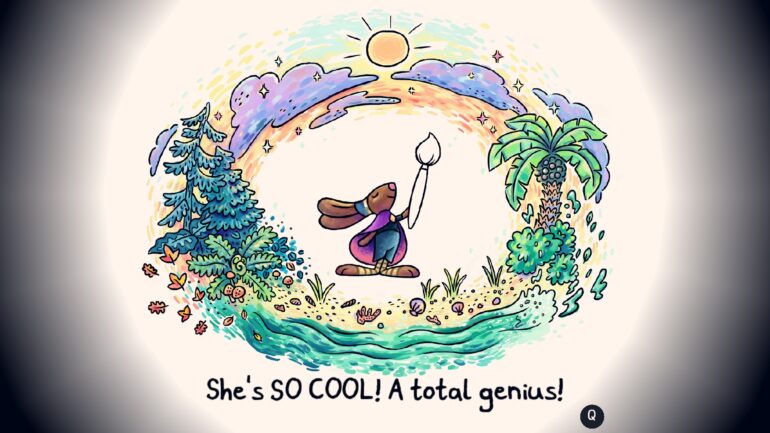 Chicory: A Colorful Tale: A Brush and a Dream – Demo Preview

Chicory: A Colorful Tale is one of the games to feature at this year’s LudoNarraCon, and it is one of the best games I have played in a while.

In Chicory, you travel through each area, restoring colour to the world. However, it isn’t as simple as it seems. There is a deep narrative hidden under the service, as well as some enthralling gameplay. The demo places you at the heart of where the colour stems from; Chicory’s tower. After a few tremors, you inspect the building to find out the world is black and white. The colour is missing, and so is Chicory. Fortunately, the Brush has been left behind, kickstarting your journey to paint the world back together.

The story is promising, and the demo ends right on a cliffhanger, leaving you to ponder what comes next. However, Chicory isn’t all about painting the best landscapes either. It utilises the mechanic to create quests and puzzles. You can paint trees to make them change forms or to use them as a means of transportation.

The music by Lena Raine is absolutely magical. There were long sequences of time where I would get sidetracked painting while just listening to the music repeat itself as it plotted along. I don’t think I will colour every area I come across, but it was definitely fun painting one.

Chicory contains a climactic battle that caught me entirely by surprise. The demo’s final boss battle was reminiscent of other top indie games over the years, Undertale being the prime example. Chicory contains brilliantly executed game mechanics, and I could play it over and over again.

The stunning mechanics and intriguing story make Chicory an absolute must-play. My only critique of the demo was that it was, indeed, only a demo. I could play for hours, painting and relaxing in the beautiful world. I can’t wait to play this game when it comes out, and I recommend you play it before the weekend ends.

Be sure to head on over to Chicory: The Colorful Tale‘s Steam store page to try the demo out for yourself. You can also wishlist it on Steam to be notified of any future updates.