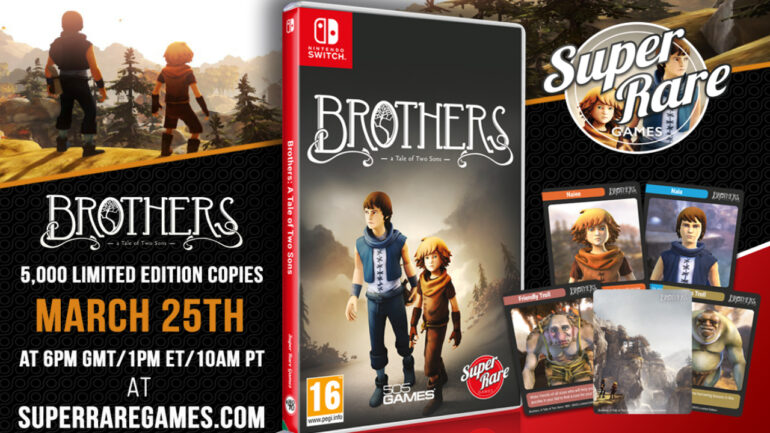 Brothers: A Tale Of Two Sons Is Getting A Switch Physical Edition

Super Rare Games are partnering with 505 Games to bring a gorgeous physical edition of the acclaimed Brothers: A Tale of Two Sons to the Nintendo Switch.

It would appear that Super Rare Games are back at it again with yet another of their incredible collaborations with indie titles. In the past, they’ve given us Project Warlock, Lonely Mountains: Downhill and of course Creaks. Well, this time they’re bringing us a beautiful edition of the brilliant Brothers: A Tale of Two Sons, an indie game like no other! Partnering with 505 Games, Super Rare Games are bringing the critically acclaimed co-op puzzler into the physical realm!

There will only be 5,000 copies available for purchase, so if you want one you’ll have to act fast! These physical editions often go like crazy, so you’ll want to have your finger poised over F5 when the time comes!

What Is Brothers: A Tale Of Two Sons?

Brothers: A Tale of Two Sons is a co-operative puzzle game that can be played solo or with a friend. It is centred around two brothers who embark on a journey like no other to retrieve the “Water of Life” for their dying father. The game comes from the mind of Swedish film director Josef Fares who is also responsible for the critically acclaimed co-op game A Way Out. Here’s a brief look at what you can expect in Brothers: A Tale of Two Sons: