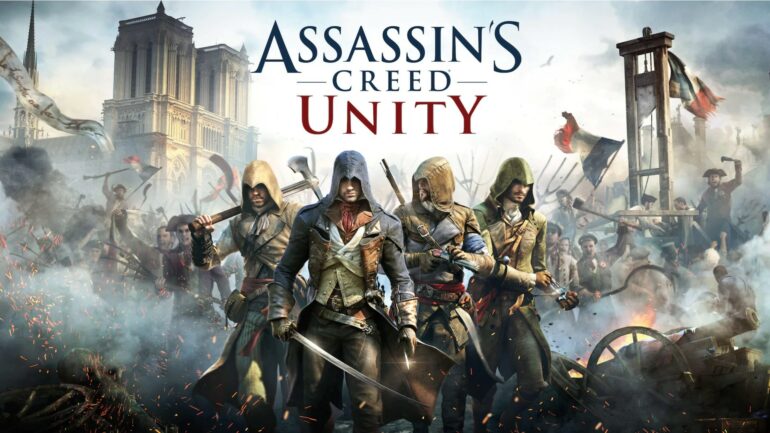 Assassin’s Creed Unity was released in November 2014 alongside Rogue, and we all know how I feel about that game. It was released for the PS4 and Xbox One, and not on the previous generation of consoles, probably so it could didn’t have to limit graphics on an older console. Thankfully, after both Unity and Rogue were released, Ubisoft officially ditched the numbering system in lieu of subtitles, a good choice I would say as the sequence was getting confusing.

Out with the Old, In with the Slightly Less Old

We, once again, play as an Abstergo Entertainment employee, this time playtesting a package experience of different past lives. Except we don’t really, there is no office to explore, no hacking to be done, and our only real-world contact is from a new and wholly unfamiliar assassin.

We first play as a templar hoping to escape with a piece of Eden, this time it’s a sword. The templar is caught and executed by the assassin’s, the sword seemingly lost. Then we are contacted by the assassin’s and pushed into the life of Arno Dorian, a Frenchman who does not have a French accent. We first play as child Arno playing with Elise De La Serre, she’s important for later. But then his dad is killed. Assassinated to be precise, by Shay from Rogue. Well, I guess if it was Shay doing it Arno’s dad got templarred, but that doesn’t have the same ring to it.

Cut to many years later and Arno is the 1700’s equivalent of a personal assistant to Elise’s dad, a nobleman and secret templar. Arno is excited for Elise’s return and the banging party coming that night. Too bad he doesn’t get to go.

I mean, he does go, he wasn’t supposed to but there has to be a game, so he has to go to the party. He sneaks out, meets up with Elise, and finds his adoptive father as he dies.

Anyway, in classic plot-driving fashion Arno is framed for the murder and thrown in jail to die. Luckily, there’s a high-ranking assassin in the same cell as him, which seems awfully convenient. He then spends all his time in jail learning how to be an assassin.

Now we have a game on our hands. We’ve got an assassin, we’ve got a goal (avenge Arno’s adoptive father), and we have a setting (1700’s France).

Bit of a Flop Really…

Everything that follows is just okay. Even if the whole goal of the assassins amounts to literally nothing. Arno goes around Paris finding templars, meeting back up with Elise, killing templars, and disregarding the Creed. The high ranking assassin that was in the cell with him turns against Arno and so Arno has to kill him. As I said, Arno and father figures don’t mix.

As we play through Arno’s life we learn that the man leading the templars is a Sage just like Bartholomew Roberts from Black Flag. The Templars want to find some trace of the Sage to open a vault of precursor artifacts with untold power. The assassins don’t want the templars to do this. Therefore, the Sage kills Elise, then Arno retaliates and kills the Sage. His remains are left in the catacombs underneath Paris and are ostensibly impossible to find.

That’s right, for those of you keeping score that means all the story progression was for nothing! Yeah! Wait… no… what was the point of this game!?

In With the New!

At this point I should have this section copy and paste ready, but I don’t.

Combat is largely the same, you have the standard mix of light, medium, and heavy weapons, an assortment of ranged weapons, and the hidden blades. It’s Assassin’s Creed, what did you expect? A balanced counterattack? Well, it’s not here, the counter is the easiest way to kill someone. Combat is fine, nothing the games prior haven’t done.

Gone are the boats, the coastal locales of the Caribbean and Northern Atlantic have been swapped out for the very landlocked Paris. I guess they wanted it to be as far removed from Rogue as possible. I can’t blame them, I would want to be as well. They didn’t add anything to replace the mode of transport so it’s just missing.

The map is big and connected which is a big tick from me, it’s just bland and lifeless. At no point was I impressed by the visuals, nor did I take much notice of them. There are several side areas. There is Versailles which serves as the starting area, it small and compact with a reasonable number of things to do, and then there are the DLC areas. I didn’t bother with them as I was just over Unity.

There are certain houses in the regions of Paris that can be claimed for the assassins, each with a few missions each to secure the area. They were fine little distractions, but they were just that, distractions.

They introduced a co-op aspect to the game, but I would go so far as to say no one is playing Unity anymore. If you are I’d like to hear from you so you can tell me why as I’d genuinely like to know. Needless to say, I didn’t even try to attempt them.

Unity introduced a rudimentary leveling system. It was a good move to keep it simple, you get some experience, and you spend it in four areas. You can upgrade your damage, your defence, your perception/navigation, and your stealth. They function how you imagine, you hit harder, enemies hit softer, you can sense guards/objects easier, and you’re harder to detect.

Arno is more customisable than ever, with plenty of outfits for him to wear with each part being swappable. Each item can have a separate buff, hoods generally affect stealth, and the rest of the pieces add other effects. You can pick the colour, the style, and the outfit. It is a nice feature, especially if you were interested in the co-op section.

Assassinations in Unity are more engaging than ever. Each target has a dedicated area in which they reside, and each area has a grace period before the killing starts. During the grace period is the time when planning happens. Do you want to go charging in and hope for the best or put the effort in to plan out the perfect assassination? You better believe I wanted it to be perfect, and oooh baby does it feel good. Each area mission gives a new clue for the location of your target. It feels amazing when you put in all the hard work to kill them and get out without being detected.

In addition to this, there are investigation missions, usually murder mysteries where Arno is tasked with finding out “whodunnit” and accusing the right person. It was pretty challenging putting all the pieces together and I did all of the investigation missions. They were worth the effort for the satisfaction of finding the culprit.

Unity happened and we all have to live with that. 2014 was a dark year for Assassin’s Creed, Ubisoft both dragged the series kicking and screaming into the next generation of consoles, and also crashed and left it to sink. They gently introduced some new features which would go on to be mainstays of the series, but they forgot to dress up the rest.

I may have been a bit harsh on Rogue given the circumstances of the release, but it’s terrible. Unity is just okay, it’s not as bad as Rogue, but it’s nothing special. Unity gets 10th place in the series. The other games are better, but I’m not about to give the games I haven’t played a leg up on it like I was with Rogue. It also loses marks for having a story that goes absolutely nowhere. I sure hope the next game is better.