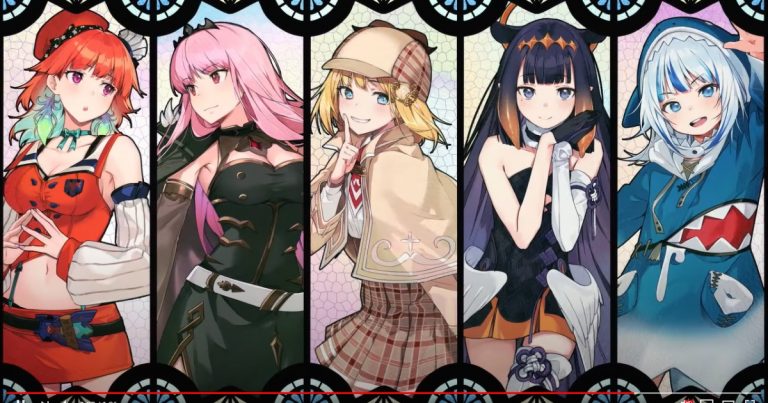 Are you interested in watching cute anime girls doing cute stuff? If you are, you should consider watching Hololive English. Debuting in September, Hololive English is composed of 5 charming members that will make you forget everything that happened in 2020. Even if you are not into anime girls or virtual YouTubers (VTubers), they will blow your mind away.

What are Virtual YouTubers (VTubers)

Vtubers are regular streamers who use an animated avatar (Live2D) instead of showing their face. They play games, sing, chat with the viewers and do other activities like standard streamers.

By using 2D models, usually drawn in anime style, they can play a character. They represent fictional characters with personalities that could make you cringe in real life, but the virtual wall separates the character and the person behind it. The viewers are attracted to their nature and can clearly distinguish it from reality. It is like watching a fictional character you love, except you can interact with them in their world.

There are two categories of VTubers: independent and corporate. The members we are interested in today are all part of the same corporation, Hololive.

Hololive is an agency created by Cover Corp to manage VTubers. This allows their members to do collaboration streams with other members with relative ease. Also, Hololive guarantees high-quality streams across all their VTubers and a seamless transition when watching other members.

Hololive English is their new project to target the American market since none of their members stream in English (there are anglophone members in other branches of Hololive such as Kiryu Coco from HololiveJP and Civia from HololiveCN, but HololiveEN is specifically targeted to a Western audience).

Now, let me introduce you to the 5 fantastic Hololive English members (last name, first name): Mori Calliope, Takanashi Kiara, Ninomae Ina’nis, Gawr Gura and Watson Amelia. Debuting on September 12, they are also called Hololive Myth because their characters are based on mythical creatures (except Amelia who is based on John Watson, Sherlock Holmes’ longtime companion and assistant).

Each person has a different personality and does different kinds of streams. Every week, they do a collaborative stream with other members of Hololive English. My job here is to describe their respective streams so that you can decide who to watch. Of course, you can watch all of them if you are interested. Without further ado, let’s see what these girls have to offer.

Calliope can be described as a tsundere boomer rapper. She can seem cold on the outside, but she sometimes shows a softer side of herself. She gets very emotional when she sees red superchats and crying ensues.

Currently, there’s a “simp” war between Americans and Canadians going on in her streams. Both sides are trying to show they are superior by donating as much as possible. She struggles to pronounce certain words like “meme”, and she says awkward things such as “I will now show you my body” when showing her full avatar in a shy yet harsh manner.

That aside, she’s a very talented singer and rapper. Her streams are very relaxing since most of them are small talk and drawing parties. Of course, she also plays games, and it’s usually a relaxing time when she plays alone. If you’re interested in this kind of chill stream, you will definitely enjoy Mori Calliope.

Kiara is a majestic phoenix who illuminates the world with her energy and positivity. She can somehow hold turkey drumsticks in her hands and play games at the same time. She’s in love with Calliope but always gets rejected and neglected. Kiara is never gonna give you up nor let you down!

When watching her stream, it’s a good idea to turn off your brain and just enjoy her cute noises. She might not be the smartest member of Hololive, but her energy and enthusiasm make up for her bird brain.

She plays mostly RPGs during her streams along with Super Mario and Minecraft. Her singing voice might not be as good as Calliope’s, but her voice is unique and worth a listen. If you want to see a chicken struggling in games while speaking with a slight German accent, Takanashi Kiara is here for you!

Ninomae Ina’nis is a human with tentacles, and she always works hard. She might look dangerous on the outside, but her soft voice and drawing skills will make your stay. Sometimes, a slow pace and relaxing stream are what you need in your life. Watching some anime girls draw other anime girls is a unique experience on its own.

She’s a very talented artist and even drew the promotional art for Hololive English herself. On top of that, Ina’nis will tell you some interesting life stories and tips while drawing. Currently, her most played game is Call of Cthulhu, which is not exactly relaxing. Overall, she’s a very wholesome character, and her streams are worth watching if you are interested in life lessons and art.

She might seem small, but she’s an apex predator. On the outside, Gura can look defenceless, but she will definitely steal your heart (and empty your wallet) in no time. Gura is by far the most popular member of Hololive English.

Famous for her ‘a’, Gura is a super cute little shark that acts in a non-cringy way. Her attempts to act scary make her seem less scary and instead, cuter. In fact, she’s the queen of cute noises that will make your depression go away instantly. Her innocence must be protected at all cost.

Her simps are called shrimps because she is too pure to know what “simping” is. Even when Gura is playing horror games, she is still adorable when she screams. In addition to all these, her singing voice is angelic.

On stream, she mostly plays horror games although she’s an excellent rhythm gamer. She proved her skills by getting multiple full combos on Muse Dash. Gawr Gura is the definition of a cute anime girl doing not-so-cute stuff, and if you’re into that, she’s a must-watch.

Finally, our last member is the ace detective, Amelia. She may seem smart at first with her detective outfit, but as she said herself: “detective brain, more like defective brain”. Her chaotic nature makes you wonder whether drugs are involved.

Unlike other Hololive English members, she is an epic gamer and mostly plays FPS like Valorant, CS:GO and Apex Legends. Like every FPS streamer, Amelia rages a lot when she dies and can be very toxic at times.

Her calm background music combined with her action-heavy gameplay makes for a unique and exciting viewing experience. She also makes cute hiccup noises multiple times on stream and unfunny puns to light up the mood. Amelia Watson should be watched by everyone interested in anime girls murdering people while calm music plays in the background.

How to Start Watching VTubers?

If you wonder how to start following a VTuber, the easiest way is to watch short clips. After that, the YouTube algorithm will automatically recommend you more and more until all you see is VTubers. Some VTubers stream on Bilibili and Twitch.

In all likelihood, one or more of your friends has already binged on some anime girl and gave away all their money through superchat. But remember: once you start, there is no way back…

Welcome to the rabbit hole!

If you want to see more articles like this, check out the Marianopolis World Review!