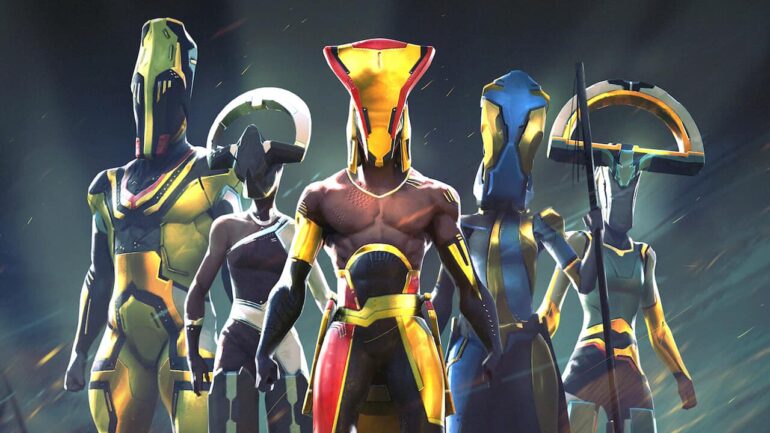 One of the main reasons I got into games journalism was to explore a side of video games that I had previously neglected. Up until about a year ago, the majority of the games that I played were either triple-A titles or well established indie games. But, upon starting my career at The Game Crater, I’ve had little time for those types of games. Instead, I’ve shifted my focus onto ironically bigger and better things. Where triple-A titles left me feeling dejected and disappointed, uncovering these little-known indie games has opened my eyes to a world full of ambition and passion. We Are The Caretakers is another example of how indie developers can not only overshadow the dwindling potential of triple-A titles but bring video games into a brand-new golden age.

“There is unbridled potential in We Are The Caretakers visual design, from its exuberantly creative character design to its otherworldly maps.”

The first thing that is likely to strike you about We Are The Caretakers is its wholly unique visual style. The Afrofuturist art style that’s brought to life by Anthony Jones helps to create a dynamic and original universe. It helps to bring alive a world that is begging to be explored. The lavishly luxurious maps are packed with details and intricately designed so that they never feel repetitive. There is unbridled potential in We Are The Caretakers visual design, from its exuberantly creative character design to its otherworldly maps.

To complement the game’s phenomenal aesthetic is an unbelievably great soundtrack by Jon Parra. Para carefully balances the upbeat frantic combat sequences with the poignantly emotional narrative to create a seamless flow. The music completely draws you in and maintains your attention, keeping you completely immersed in the unfolding events. Individually, the tracks are fantastic at creating a haunting atmosphere or raising the tension in high-stakes combat. But in conjunction with one another, they create a dynamic that transforms the game into a cinematic marvel.

“We Are The Caretaker’s narrative motivation is deftly weaved within the overarching sci-fi narrative.”

Outside of the superficial, We Are The Caretakers is a game with a substantial amount of depth. It definitely feels like an eclectic amalgamation of various strategy games. There are themes, motifs and ideas present from titles like Darkest Dungeon and XCOM. But that doesn’t mean that We Are The Caretakers is a greatest hits type of game. Instead, I found We Are The Caretakers to feel and play like an entirely unique product, despite borrowing mechanics from other titles. The minute-to-minute gameplay is extremely fun, and mission length, type and objectives varied enough that I never got bored. Once I had completed the first Era (chapter) of the game’s core campaign, I quickly hurried on to the next.

Underscoring the gameplay, and encouraging your progression throughout the campaign, is We Are The Caretaker’s solemn narrative. It is an allegorical narrative that focuses on the issues surrounding animal conservation and cruelty. However, it never feels thinly veiled or heavy-handed. Instead, We Are The Caretaker’s narrative motivation is deftly weaved within the overarching sci-fi narrative. Its world feels distinct and unique, and its morally ambiguous character drama is enough to offer the player plenty of enjoyment without them deeply analysing the hidden meanings and semiotics. But the added layer of depth to the narrative helps it feel not only more relatable but more nuanced.

“My main gripe lies in some of the gameplay systems.”

Unfortunately, We Are The Caretakers is not without its issues. There are the expected visual and auditory-based issues due to its Early Access status. For one, the sound effects in combat feel oddly muted and don’t pack the necessary punch to make it feel as dynamic as it should. I found the occasional visual bug with guns clipping through arms, or animations not feeling entirely up to snuff. But my main gripe with We Are The Caretakers lies in some of its gameplay systems.

In order to complete a combat engagement, you must first use a takedown move on your opponent. Whittling down their stamina or will is not enough to end the fight. Once you’ve done so, one of your units can use a takedown. In doing so, you will net varying results depending on which takedown move you used. One such move is the ability to detain your opponent. This brings them back to your HQ for you to deal with. Unfortunately, I felt that this mechanic was just a little too shallow. You’re given two options when dealing with your detainee, which seems entirely randomised. But all of these options are almost always negative. It got to the point that killing your opponent, or bribing them to leave, felt like better options than detaining them.

“For the low price-point and the sheer amount of content already available it is hard not to recommend We Are The Caretakers.”

There were a few other systems that currently feel undercooked, such as the reputation system which seems to function more as a type of currency, and the threat system in combat. Whenever you use more aggressive moves, your threat level rises. By hovering over your threat level you’re treated to the various buffs and debuffs that it is currently inflicting on your party. But despite getting my threat level rather high, I never found it affected combat negatively nor positively.

Of course, it bears mentioning that We Are The Caretakers is currently in Early Access, and as such, it is expected that there would be various bugs and mechanics still in their infancy. But for the low price-point and the sheer amount of content already available, as well as the depth behind said content, it is hard not to recommend We Are The Caretakers. It is a truly brilliant experience and one that I am excited to see blossom in the near future.

We Are The Caretakers Review
Summary
We Are The Caretakers is a unique and utterly brilliant strategy game. Progressing through its narrative-driven RTS campaign is a treat. Everything from the visual aesthetic to the intricate gameplay mechanics feels refined and polished. While there are certainly some Early Access issues here and there, for the price, We Are The Caretakers is absolutely worth it.
Pros
Great Visual Design
Interesting RTS Mechanics
Poignant Narrative
Cons
Missing Sound Effects
Minor Visual Jank
8.5