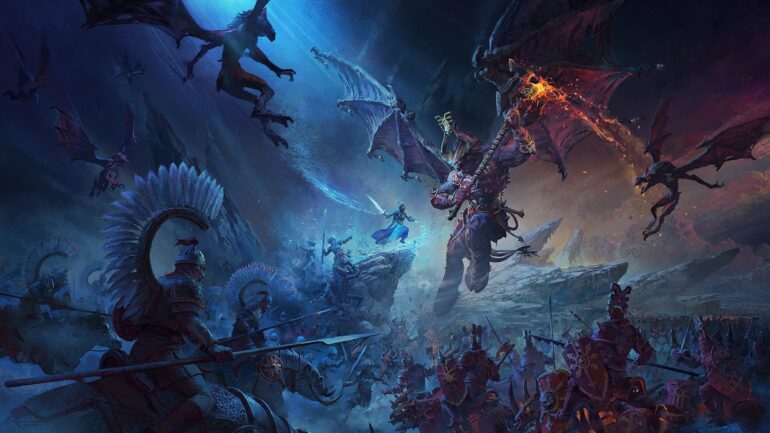 Partnering with Games Workshop, the folks behind the incredibly popular Warhammer franchise, SEGA turned their Total War series from a historical simulator, into an epic fantasy series set across sprawling landscapes and encapsulating legendary battles. So far the series has two mainline games and over 10 DLC and has included factions such as The Empire, The Dwarfs, Greenskins, Vampire Counts, Beastmen, Wood Elves, The Skaven, High Elves, Dark Elves, Lizardmen, and Tomb Kings. I’ve personally played the first two and thoroughly enjoyed them!

The newest entry to the series, Total War: Warhammer III, will feature the video-game debut of Kislev and Cathay, alongside the factions of Chaos – Khorne, Nurgle, Slaanesh, and Tzeentch. Players will be able to explore the Realm of Chaos, and will be tasked with either saving or exploiting the power of a dying god! Whatever you choose is up to you, but choose wisely, as your actions will culminate in an endgame that determines the fate of the world! It all sounds very fantasy and very Warhammer-esque, so if any of that intrigues you, then this might just be the title for you!

If you’re already a fan of the series then you’ll undoubtedly be picking this up, but if you’re new to it, don’t worry, you won’t have to pick up the other two to play this title. Total War games tend to be standalone titles, even if they are sequels! If this looks like your cup of tea, then head on over to Total War: Warhammer III’s Steam store page and pre-order it, or wishlist it for more information on when it’s dropping!