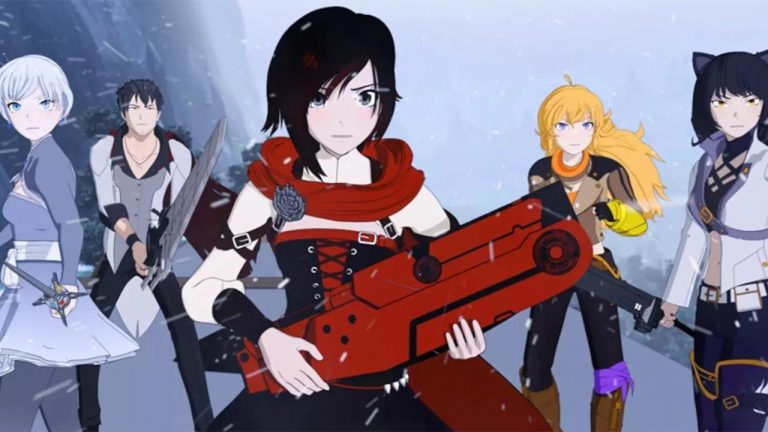 The Top 5 Weapons in RWBY

There’s no debating that weapons play an important role in RWBY – after all, they’re apparently conduits for the soul, and they can be seen directly interacting with characters’ semblances. The real question is: which character wields the greatest weapon?

I set out to answer this question for myself, and I looked at all the weapons used by the major and supporting roles in the show. Having decided on my list, it’s become quite clear that what makes a weapon great is versatility and cool transitions.

Without further ado, here’s my top 5 weapons in RWBY…

Lightning Lash functions as both a long-range whip imbued with lightning energy and a close-range sword. It features two slots either side of the handle that Ilia loads with electric dust. I mean, is that not amazingly cool?!

Ultimately, what I love most about this weapon is how unique it is – not just in design, but also in its use of dust. We’re used to seeing the usual elements used in fighting (earth, fire, etc.), but electricity is rare. In my opinion, it not only makes Ilia’s character more interesting, but it’s what earns Lightning Lash its place in this list.

Next up is favoured warrior, Pyrrha Nikos, and her impressive fighting gear.

Miló and Akoúo̱ (literally ‘speak‘ and ‘listen‘ in Greek) are Pyrrha’s weapons of choice: a simple shield, and a javelin which doubles as not only a rifle but also a xiphos – a Greek, dual-bladed short sword.

I don’t know whether it’s the Greek-themed weapons themselves, or Pyrrha’s fighting style that makes me love this duo so much, but there’s something incredibly elegant about watching Pyrrha use them.

Whether it’s a beautiful design, unattainable proficiency, or maybe I just like fierce women… Either way, a well-earned 4th spot on the list!

Okay, technically it’s a ‘Variant Ballistic Chain Scythe‘, but that’s quite the mouthful!

Blake’s weapon, Gambol Shroud, is high up on my favourite list of weapons due to its high amount of versatility. Unsheathed, it’s a katana, which can also fold down to a kama (a Japanese sickle), it has a gun, and the ribbon on the end allows for some impressive ranged manoeuvres, plus the sheath itself is bladed and can be used as a sort of cleaver. For the quiet, unassuming one, Blake sure is packing the weaponry!

I think my favourite part about Gambol Shroud is the kama and the ribbon (making Gambol Shroud into a kusarigama – a Japanese sickle on a chain). Watching Blake swing around using it never gets old!

One of my favourite characters in RWBY wields one of my favourite weapons in the show! I could have listed Ruby’s scythe Crescent Rose here as it was modelled off Qrow’s but, personally, I think Harbinger has a little more to offer.

So, aside from having an awesome name, Harbinger is a multi-functional weapon. It triples as a single-edged great sword, a badass scythe, and, of course, a gun.

While Ruby’s scythe doubling as a sniper rifle is pretty awesome, the reason I prefer Qrow’s is its strength and changeability. I guess I’m just a sucker for a huge greatsword, sue me. Also, the transition animation is unbelievably pleasing.

And here we have it, the number 1 spot!

Ruyi Bang and Jingu Bang have been my favourite weapons since I first saw them used way back in RWBY Volume 1. They are a pair of red and gold shotguns that double as a gold chain-linked nunchucks, which can also slot together to form a bo staff.

There’s nothing I don’t love about these weapons! The design is graceful and strong; the whole concept is just badass, and nothing gives me more satisfaction than watching Sun spin them around with awe-inspiring proficiency.

I never fancied myself as the ninja loving type, but I think I might have to reconsider…