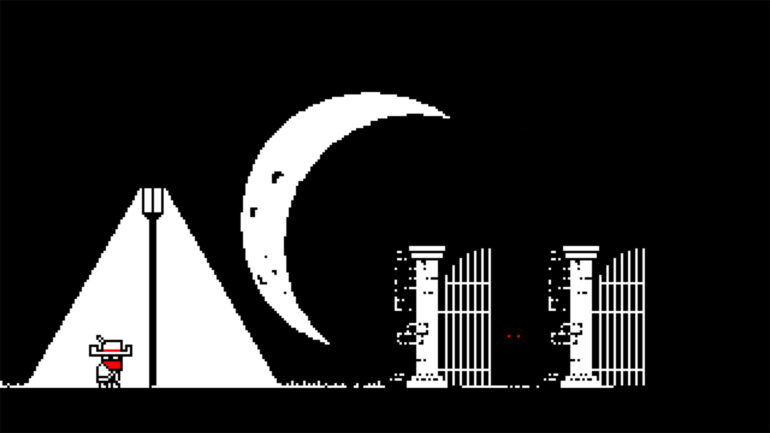 Shot in the Dark: Simplicity at its Finest – PC Review

Everyone has some kind of experience with side-scrolling shooters. Maybe you’re an OG, and you remember putting the Konami Code into Contra because it’s ridiculously hard. But I guarantee you’ve never played side scroller like Shot in the Dark, and its imperative that you do.

You play as the Lone Bandit out to collect a bounty. You are displayed in white clothes with a red bandana, and the man with the bounty on his head is in black clothes. Seems simple enough. Explaining why he wants revenge wasn’t the aim of the game. Even so, making it clear we want revenge was. And with revenge as cheap as $10, I’m buying!

“Shot in the Dark is simple to the point of elegance.”

In Shot in the Dark, you can only do a handful of things. You can walk left and right, jump, aim, shoot, and reload. And that’s the whole game; there’s not much to it. Except that there is. Shot in the Dark is simple to the point of elegance. Putting the game down wasn’t an option for me. I was addicted from start to finish. I played all 67 levels, and I never once felt bored. When each level demands your attention, how could I? Possum House Games utilised the game’s mechanics beyond its potential, and offered a new experience or spin on elements you had just learnt, making for a remarkable gameplay experience.

If you miss a shot, a weak whiff of sound follows. However, hitting a shot is satisfying, and a loud, impactful 8-bit gunshot reassures you of that too. You must stand still to shoot, which adds a sense of urgency and strategy to the shooting. Using these mechanics as an added extra never happened as it is ingrained into the game’s core.

Not only that, you have to be pinpoint accurate with your shooting. The bullets only hit where the crosshair is, so if you aim to the left of a target, it will miss. This lends itself to the challenge of the game, keeping you immersed.

This is a game where you’re going to die, a lot. There are levels where the only way to complete it, is to shoot your way out, immediately following by levels where stopping to shoot, kills you. This keeps you on your toes and making quick-fire decisions. And you’re more than likely going to make the wrong decision and die, but you’ll figure it out and be back on your little 8-bit feet in no time.

“Accompanying it is an absolutely banging 8-bit soundtrack.”

Using three colours to make an entire game is a bold move, and makes the aesthetic of Shot in the Dark standout. Enemies can be the same colour as the backdrop, so you can only see their eyes.

Accompanying Shot in the Dark, it is an absolutely banging 8-bit soundtrack. I couldn’t help but hum along too. I can neither confirm nor deny that I annoyed my wife with my excessive humming.

The game’s only drawbacks are the lack of narrative components. Namely that there isn’t much of one and it left me wanting something more. Having said that, incorporating a heavy story into the game could have hampered the fast-paced experience on offer.

Shot in the Dark Review
Summary
Shot in the Dark is a simple yet elegant game with some of the most engaging gameplay I have ever experienced. With the 3 colour 8-bit aesthetic and memorable music, the game had me enraptured from start to finish. I can't wait to see what Possum House Games does next.
Pros
Engaging Gameplay
8-Bit Aesthetic
Elegantly Simple
Cons
Basic Narrative
9.5
Amazing