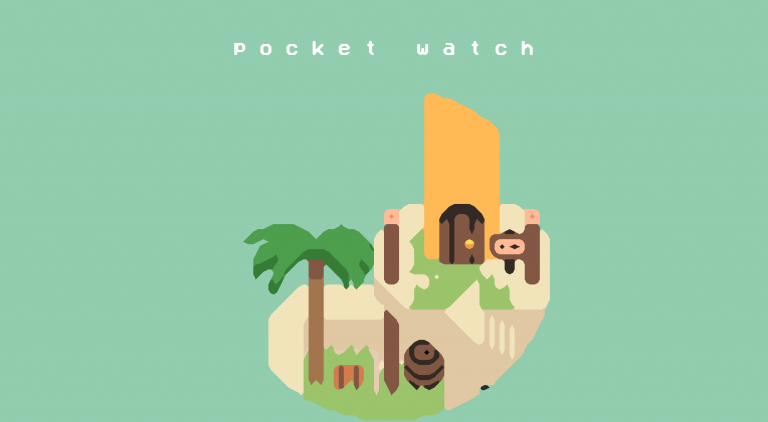 Pocket Watch: A Beautiful Puzzle Game With A Lot Of Charm

Pocket Watch is a beautiful, intricate game that fills me with so much warmth. I can tell you now, this one is a keeper.

Pocket Watch is deceptively simple at first. You awaken on an island and spend the first few hours of the day fixing a boat before eventually sailing to Vulcano City. It’s aptly named, as there just so happens to be a rumbly volcano slap bang in the middle. Oh, and it’s about to explode.

Your job in Pocket Watch is to raise enough cash to buy the titular pocket watch in an auction being held at 9 pm. You’ll likely spend your time speaking to the island’s residents, maybe even find a coin or two. It’s a quaint town, the residents seem nice enough, and there are even a few mysterious elements that may pique your interest. But, by the end of the night, you won’t have enough cash, the volcano will explode, and you’ll be sent straight back to the beginning.

“Vulcano City is a fascinating place to explore.”

This is where Pocket Watch gets super interesting. You see, this is a puzzle game of sorts, one which has you unlock many potential avenues to beat the game. There’s a hotel that’ll hire you if you have a broom; a gate that’s locked with chests just beyond it; an invitation-only club, guarded by some mean looking crocodiles. All of these places and people surely lead to more coins, coins that’ll inevitably help you win.

This is what you have to consider as you explore every nook and cranny of the island. It’s what keeps pulling you back in every time the volcano erupts. It’s awesome! The best thing about Pocket Watch is that even if these mysteries don’t lead to more coins, they’re still lovely, world-building tidbits that make Vulcano City a fascinating place to explore.

Complimenting all of this is a beautiful visual art style that’s reminiscent of A Short Hike. It’s striking, even trippy at times, but it evokes an almost childlike wonder, encouraging exploration. There’s music too, and it’s good stuff, although it only plays at specific points, and the change in tunes from area to area can be slightly jarring as the map isn’t that big.

Pocket Watch is $3, £2.64 (including tax), or AU$4.65. It’s a reasonable price for a beautifully crafted game that’s packed to the brim with charm and things to do. I highly recommend this one, and it’s available over on itch.io if you are interested. Be sure to check out this and more from developers Sokpop Collective.