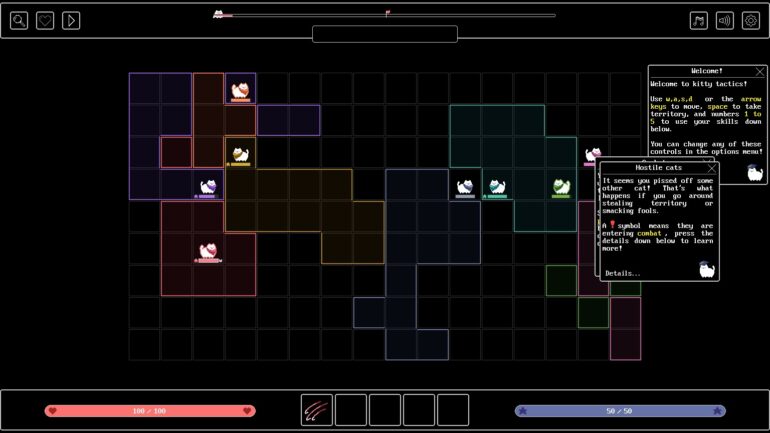 Kitty Tactics: As Wide as a Puddle, as Deep as an Ocean – PC Review

When I first came across Kitty Tactics, I figured it would be an enjoyable, albeit shallow, experience for under £3. Its simple, eye-catching visuals drew me in, and the premise of kittens battling it out was irresistible. Not that I condone it, but a tactics game centred around kittens fighting is certainly an intriguing premise. Fortunately, the more I played Kitty Tactics, and the more I delved into its complex systems, the more I found myself enamoured by the little kitty that could.

“Despite its exterior masquerading as a simple, but sweet, title, if you delve deeper into its systems, you’ll find it is deceptively complex.”

Kitty Tactics has a straightforward premise. You must manoeuvre your kitten around a tiled board, conquering the various spaces and changing their colour into your own. There’s no narrative, aside from the one crafted from your own experiences, and no form of campaign. Instead, upon opening the game, you are given the opportunity to alter the map’s size, difficulty and chosen colour. From there, you’re thrust into battle and set free to go about your conquering.

Despite its exterior masquerading as a simple, but sweet title, if you delve deeper into Kitty Tactics’ systems, you’ll find it is deceptively complex. Once you’ve booted up your first match, you’ll be inundated with hilariously written tutorials and manuals to flick through. There’s a lot on offer here, from changing your classes to swapping abilities and even spawning your own offspring. Gameplay extends beyond moving your kitten around and taking over the board. If you immerse yourself within its gameplay systems, you’ll find much more depth than anticipated.

“While Kitty Tactics’ may not excel at being a visual spectacle, it does succeed in being an enthralling tactics game.”

While understandable for its price point, Kitty Tactics visuals make what is an otherwise excellent experience, a little lacklustre. It was never tremendously detrimental to my experience, but I felt that it let down the overall package. Admittedly the sprites for the kittens were rather cute. Unfortunately, while Kitty Tactics’ visual fidelity is easily ignorable, it does suffer from a lack of optical clarity in certain areas. For example, specific colours look all too similar to one another. This makes it difficult to discern whether or not you have taken that square or an opponent has. It is easily remedied by simply targeting the more distinctly colourful squares or choosing a colour that is not similar to any other option.

However, while Kitty Tactics’ may not excel at being a visual spectacle, it does succeed in being an enthralling tactics game. Surprisingly, I felt it was much better than a certain triple-A title I’ve reviewed previously. Each system at play here is excellently executed. Whether it is the ability to form friendships (an alliance of sorts), buff your allies, attack and crush your enemies, upgrade your class and skills, or watch as wars unfold between the AI-controlled players, I thoroughly enjoyed them all. The added immersion of the AI-controlled kittens acting independently of you makes the game’s world, as visually barren as it may be, feel alive. It makes for incredibly compelling gameplay, which I found myself coming back to time after time. 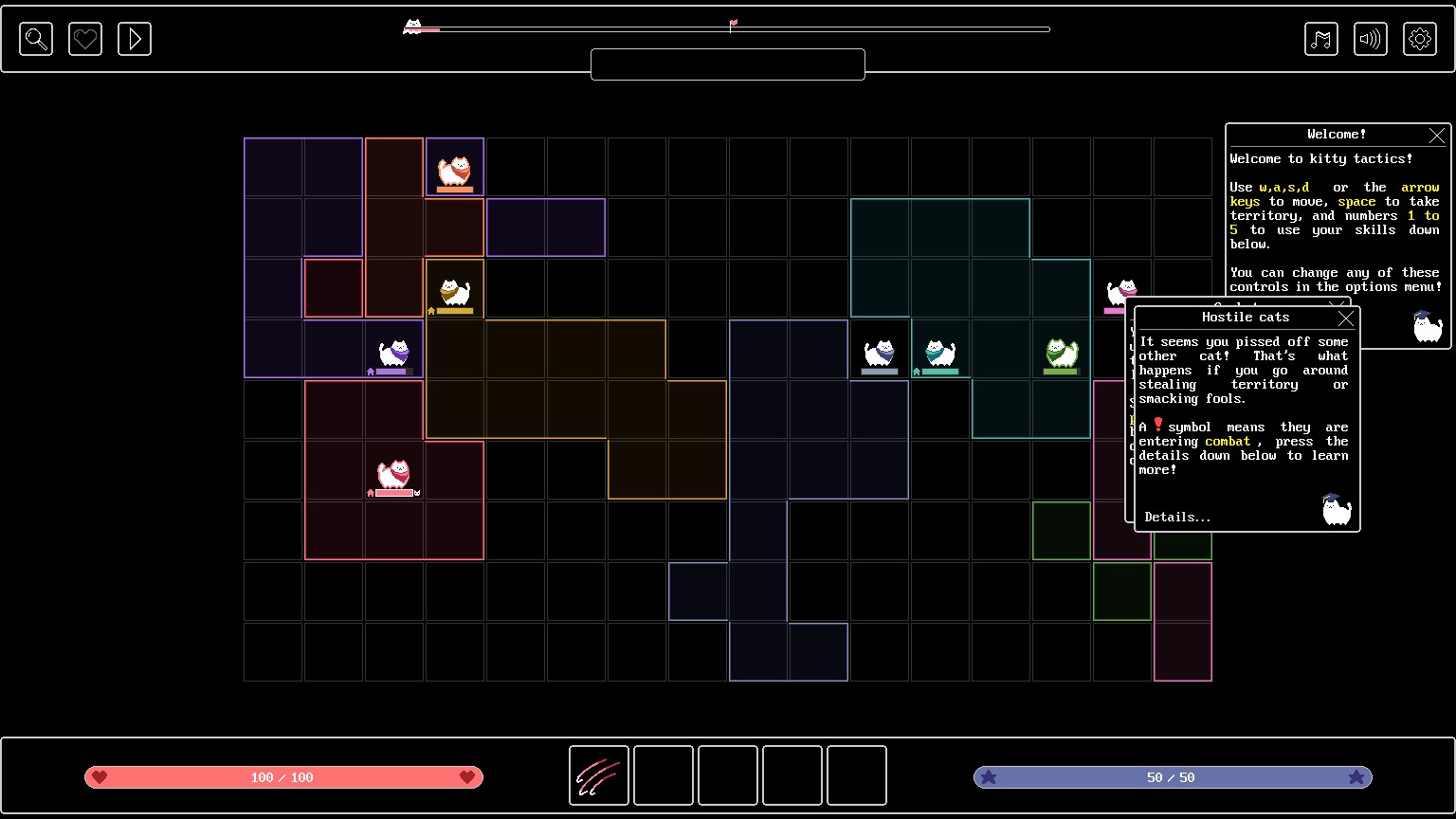 Kitty Tactics
Summary
Kitty Tactics may appear simple at first glance, but in reality, it is a complex tactics game with a lot of replayability. While it suffers a little in the visual department, this is well worth your time and money for its exceptionally low price!
Pros
Deep Tactics Gameplay
Easy To Pick Up And Play
Jovial Atmosphere
Cons
Simplistic Graphics
9