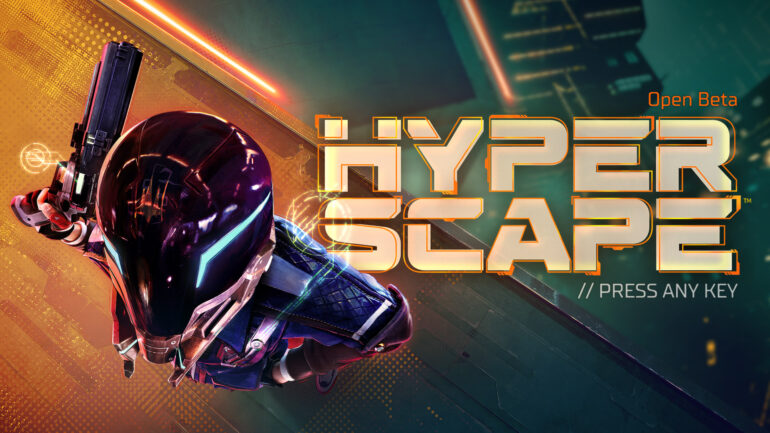 Set in 2054, Hyper Scape is a revolutionary digital world built on poor decisions from its ancestors. If you have seen the film Ready Player One, then this will feel quite familiar.

As the world collapses into complete chaos from “a lot of bad decisions”, a company named Prism created a place to escape the real world. Enter Hyper Scape. Using advanced technology, it advertises a new reality away from the monotonous megacities of the future. From here, people can enter into the key principle of Hyper Scape, Crown Rush.

“Neo Arcadia is designed perfectly to match the fast-paced action of Crown Rush.”

Hyper Scape‘s take on the battle royale genre comes in the form of Crown Rush. It begins with your typical battle royale rules, survive until the end while eliminating other players. If you die in squads and you still have players alive, you turn into a hologram. In this afterlife, you can run to a dead body anywhere on the map and get revived by a teammate. When there are only a few teams left, a crown spawns into the game. This is called the showdown phase. Players can either survive the longest or hold onto the crown for an extended period to win. It may sound like your stereotypical battle royale, but Hyper Scape is far from it.

Crown Rush is played on an enormous map called Neo Arcadia, a bright, futuristic take on the future. Gameplay on Neo Arcadia is fast-paced, exhilarating and undeniably, addictive. Moving around the map is fast and you are constantly running into other players. In order to keep up with the speed of the game, you need to constantly be on the move which in turn expels the need to check behind every corner for other players.

Neo Arcadia is designed perfectly to match the fast-paced action of Crown Rush. You will frequently find yourself running and jumping throughout the game to stay alive. Hyper Scape offers the players the ability to double jump and mantle on almost any surface you can. Partner this with the tall buildings of Neo Arcadia, and you have the perfect mixture of vertical fast-paced action.

“The battleground in Hyper Scape is forever changing.”

Hyper Scape is divided into different sections and landmark locations. As the game progresses, typical battle royale games tend to use a closing circle to squeeze players together to create more action as the remaining player numbers dwindle.

Hyper Scape has a unique system where it closes different sections throughout the game in a non-linear fashion. Each section is set on a timer, and it starts to disintegrate whilst you are in it to let you know that you’ve got to get a move on. It shows a waypoint to the closest area you have to reach, so you survive without taking damage. After a few minutes, the section completely disintegrates. This includes all the buildings and locations with it. You fall to the ground and take damage until you get into a section that isn’t infected. Hyper Scape‘s notable inclusion of this, is refreshing. It’s nice to see a new battle royale game not fall into the same categories as others and try to create its own personality.

The battleground in Hyper Scape is forever changing. Using the Crowncast extension, viewers can impact the game. People can vote on different events that directly affect the gameplay in real-time for all remaining contenders. Currently, the game offers Supply Crate, Health Kit, Cooldown Accelerator (Hack Cooldown), Triple Jump, Low Gravity, Infinite Ammo, Reveal (reveal all players) and Haste (Speed Boost). The Crowncast extension is also partnered with Twitch. If you are streaming, your twitch viewers can cast their vote on which event will come into play. Crowncast is a distinctive inclusion into the game and always keeps you on your toes. Jumping whilst low gravity is on is a surefire way to let everyone know where you are.

In the current over-saturated market any battle royale game wouldn’t be complete without weapons and a hint of independence. The Neo Arcadia arena is scattered with unique guns and hacks that you can fuse together to enhance their current state. Handguns, automatic rifles, explosive launchers and a sniper all complete the arsenal of available weapons. Hyper Scape shines with a unique gun selection as no two guns do the same job. Therefore, picking what guns you want to equip can be crucial as you definitely can’t bring a shotgun to a sniper battle.

Hacks are Hyper Scape‘s answer to individuality. Alongside weapons, hacks are found lying on the ground, ready to be picked up and utilised. Hacks are abilities or power-ups that are used quickly to aid the player. Players can build giant walls, go invisible, teleport forward, launch themselves into the air and even turn into giant bouncing balls. Hacks are on a cooldown so players can reuse the same hacks more than once. The player can only hold two hacks at once, so you have to find the same hack twice to make it better with Hyper Scape‘s fuse system.

Hyper Scape‘s fuse system is simple. You find a gun or a hack that you already have and press your interact key and voilà! You have upgraded it. Selecting resourceful weapons and hacks is critical but upgrading your weapons is the difference between life and death. You can fuse your weapons or hacks up to 4 times (so you need to find the same gun or ability five times) and it improves a variety of different factors.

Combining weapons can increase its magazine size and damage significantly. The hexfire, an automatic gatling gun, is one of the firearms that flourish when it reaches level 5, receiving a magazine size upgrade that is large enough to take out a whole squad.

When hacks are merged, they receive an increase in cooldown time and either a damage increase, health increase or distance increase depending on what hack you are currently using. The slam is one of the most overused hacks in-game. It gives the user the ability to launch themselves soaring through the air to slam straight down to the ground to deal significant damage. Using the fuse system, slam gains an increased cooldown and damage increase to get you out of those sticky situations.

The fuse system fits into Hyper Scape flawlessly. Too many times in battle royale’s you are caught between having to loot quickly and fighting people off at the same time. Picking up the same item to make your current weapon or hack better is one of the quickest ways to loot in a game where movement is vital.

“Controller aim assist in Hyper Scape is the closest thing to aimbot hacking you can get without cheating.”

Hyper Scape is currently in open beta exclusively to PC. Therefore, it offers controller support for anyone that wants to try the game but naturally plays on a controller. The lobbies aren’t split, and currently, that is a huge problem.

Aim assist in recent times has become a massive issue in games, and Hyper Scape hasn’t quite managed to balance it yet. If you track reasonably well with a controller, then aim assist will follow players left and right profusely until they die. At first, I was shocked by how incredible some people were at aiming. I then noticed numerous videos being uploaded online about the aim assist tracking, and I thought I had to try it for myself.

Controller aim assist in Hyper Scape is the closest thing to aimbot hacking you can get without cheating. It only took a few games to conclude that aim assist offered way too much support whilst you were jumping. Jumping with guns steered you towards the player and will dramatically move your cursor onto them. The game is currently in early access, but this is a series trend that is consuming recent cross-platform games.

“The items in the marketplace are strictly cosmetic and don’t provide any bonuses whatsoever.”

Hyper Scape has continued to follow the modern freemium road with a seasonal battle pass and challenge system. Currently, the open beta of Hyper Scape doesn’t offer a premium option, but what it does offer is the ability to unlock rewards if you have a twitch prime subscription. The battle pass only has 30 tiers with challenges resetting daily and weekly to help you complete it. The pass includes emotes, skins, emblems, loading screens and even new melee weapons. If you’re not happy with the battle pass’s cosmetic options, you can buy specific items in the daily marketplace.

The marketplace is a store that resets daily and offers various items. The items in the marketplace are strictly cosmetic and don’t provide any bonuses whatsoever. The store contains new weapons designs, emotes and even new champions, and it is reasonably priced with champions being just under AU$20. 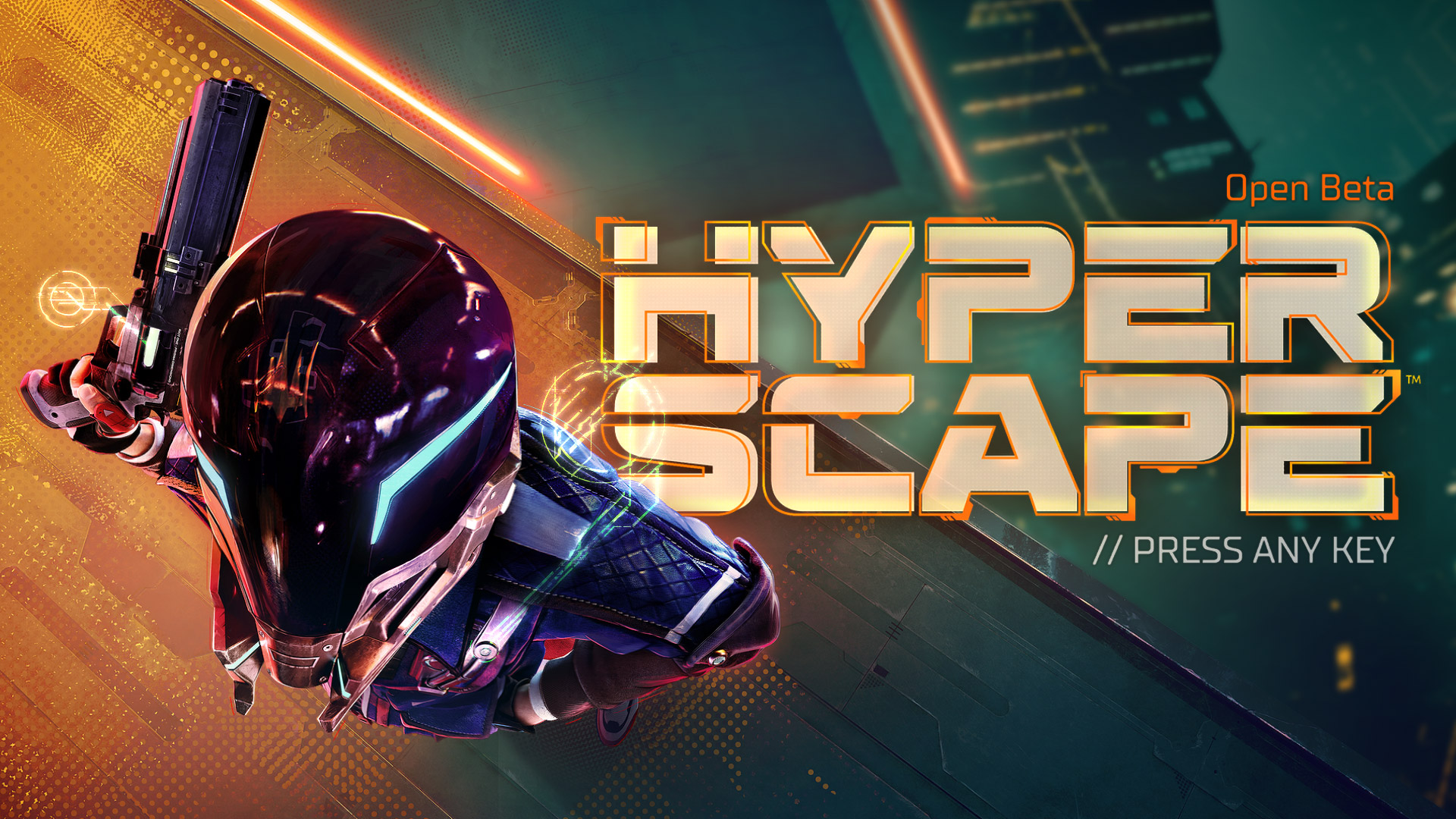 Hyper Scape Review
Summary
The battle royale genre has taken the gaming industry by storm, and Hyper Scape looks to cement itself as a niche within the genre. The guns, hacks, area disintegration and in-game spectator events positively impact Hyper Scape's unique personality. Hopefully, with the game being in open beta, Ubisoft can iron out the kinks to maximise the fast and fluent gameplay that Hyper Scape provides.
Pros
Intense
Fast Pace
Fuse System
Cons
Strong Controller Aim Assist
No Cross Platform
9