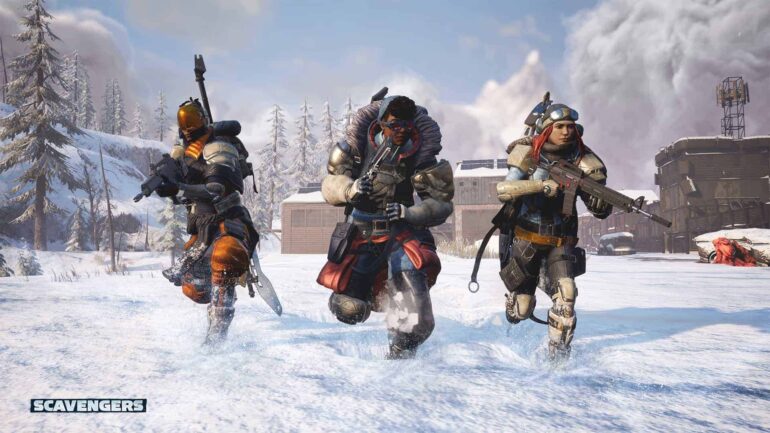 Free-to-Play Shooter, Scavengers, is available in Early Access for All

Scavengers, the free-to-play Shooter, has decided to open Early Access to everyone on both Steam and the Epic Games Store.

Originally, players could only play Scavengers by watching Scavengers’ Twitch streams and receiving a Steam Key. However, following the overwhelming response to the Scavengers’ limited-time Twitch Drops event, Midwinter Entertainment has decided to make Scavengers’ Early Access available to everyone. The game even reached the 6th most-watched game on Twitch with a peak viewership of over 120,000 people.

“Going ‘always-on’ with Early Access means we can significantly expand our ability to tune the game, implement new systems, and take in more feedback from all of our players. This is a major milestone ahead of our full launch later this year.”

The strategic PvE and class-based PvP shooter has marked the early access release with a new trailer. You can check it out here.

Scavengers drops teams of three into a hostile frozen wasteland, where they must compete to survive and extract datapoints against rival teams, insane mutants and rogue creatures. Every Explorer is equipped with a combination of powerful abilities and futuristic weaponry to survive the unrelenting post-apocalyptic Earth. Scavengers has a unique style of play, blending sandbox-style PvE and class-based PvP.

Even though it is only in early access, it still features a lot to do, such as:

Scavengers is currently in development on PC, with a full release planned for 2021. It will also be releasing on consoles in the future, but it currently has controller support on PC. You can download Scavengers now on Steam or the Epic Games Store for free.

Please note: The developers plan to do a progression wipe during Early Access. After that wipe, all future progress will carry over to the full release. However, if you play before then, you will lose progress.