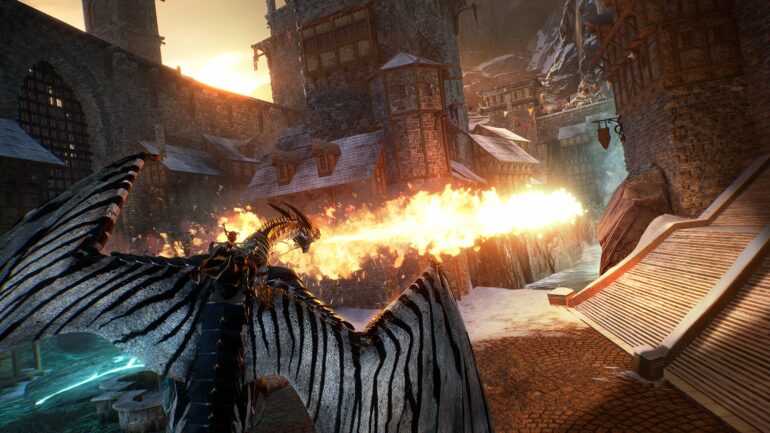 The movement is slick and fluid. You find yourself taking sharp turns, sudden dives and climbs to catch or escape your foes. Much like other dogfighter games, you have to track your target until you “lock on” making it a lot more accurate when sending reams of fireballs at them. If you get close enough, you can spit jets of flame at them too. But beware, the longer you chase someone down, the more likely someone is doing the same to you!

In all honesty, I found myself crashing and burning after being shot down by the opposition a lot. I would get so engrossed in taking one person down that I wouldn’t see their wingman (get it?) coming for me. However, this isn’t Century’s downfall. If anything, this is where the game excels, keeping you immersed every second, whether victorious or not.

There are power-ups to collect that keep the gameplay balanced and can (if collected and utilised effectively) bring a struggling team back to a level playing field. Century also offers special abilities relating to the three different rider classes that make gameplay slightly different each match. These include:

Luckily, they give you the option to test out each class in a 3-on-3 mode before joining a full game. This is a welcome addition as it helps get used to the controls and different classes gameplay styles.

Carnage is Team Deathmatch with a Twist!

With this being a playtest, there wasn’t access to everything, and the focus is put squarely on the multiplayer gameplay. We had access to the “Carnage” mode. This is a two-team deathmatch mode, featuring six players on each team, competing to earn the most points by the end of the game. It’s fast-paced and chaotic, with teammates and enemy dragon riders weaving throughout the map, spitting flame at each other. It feels a bit like the original Star Wars Battlefront 2’s space combat, but with scales.

The way this differs from a regular deathmatch is the points system. You do not merely get one point per kill. Instead, a bounty system increases the number of points your death is worth as you kill more people. So, if you stick to easy kills from the weaker players, you can rack up a point per kill for your team. But, it also means when you die, you could be worth up to 5 points to whoever takes you down, meaning that a few lucky shots on a good player could swing the tide of the battle entirely. Add to that the powerups that become available such as the “Drakepiercer” which grants a one-hit kill, and you find that your matches are pretty evenly balanced no matter what.

There was always a sense of urgency in getting back into the battles as the timer ticked down and your chance to score victory dwindled. If you draw level when the timer ends, it goes to sudden death, next kill wins, and that is a nail-biting experience!

As you level up your rider class, you unlock cosmetics to change your dragon/rider’s look and get equipment to power them up. There is also a microtransaction shop (grrrr) that allows you to buy cosmetic bundles for different looks. This wasn’t accessible during the playtest so I cannot yet tell you if this will affect gameplay, but I hope it doesn’t.

As you level up, you receive rewards like equipment and, crucially, Dragon eggs. These don’t hatch straight away. Instead, you have to equip them and gain XP during gameplay. When equipped, an egg consumes 50% of all earned XP with the rest going towards the player’s level until it hatches. And when it does, you get yourself a brand new mount!

Overall, the time I spent with Century: Age of Ashes was absolutely thrilling. It is easy to learn but difficult to master. And it had me gripped from the start, despite being terrible at riding dragons. The different classes make gameplay different enough to change the tactics of a match and keep things balanced. But I do have some concerns over microtransactions potentially adding a pay-to-win element when it launches. Hopefully, I’m wrong.
This game is what How to train your dragon would be like if it wasn’t family-friendly and I am here for it.

Century: Age of Ashes releases on Steam sometime in February 2021