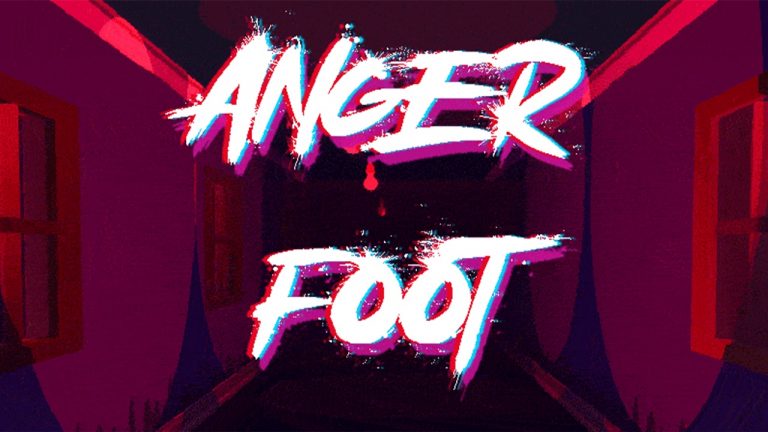 Anger Foot: A High-Speed Aim Trainer With A Kick-Ass Bass

The premise is simple. You have a gun with limited ammo, and when you’re out, you can throw it at the enemy and pick up another one. And you’re also equipped with a mighty kick. Each attack will instantly kill the enemy, but you will die just as quickly.

The level design drew me in instantly, and it was even why I downloaded the game in the first place. As the game progresses, Anger Foot adds direction uncertainty. Placing doors around the level, so you don’t know where you are going. These “false” doors can lead you to a dead-end or a random enemy just hanging out in a closet.

The enemies aren’t very agile and, most of the time will come directly towards you, especially if they don’t have a gun themselves. Your handgun is very easy to use, and does the job quite efficiently. Unfortunately, in later levels, your foot is mostly used to kick down doorways rather than kill enemies. That also could be determined by your playstyle, as I enjoyed using the gun a lot more.

“Anger Foot has a rhythmic bass that almost forces you to be fast.”

Similar to other free indie games, Anger Foot is extremely short. It should only take you around 10 minutes on your first playthrough, even if you die 100 times on the retched second level. It can’t be faulted considering it was free, but I would consider paying for the same game with extra levels.

Anger Foot has a rhythmic bass that almost forces you to be fast. I felt compelled to keep the pace and run as fast as I could through each level. Even though this became slightly frustrating, it felt good to reach the end.

The game has an element of replayability with timed levels. So speeding through each round felt worthwhile to see if I could reduce my time. After a few playthroughs, I did manage to reduce my time down to around 3 minutes total between all five levels. This felt great until someone posted an image confirming their time was below 1.5 minutes, so I decided to give up.

Overall, if you have 10 minutes to spare before you play Warzone or Valorant, this is the perfect game to get your eye in. You can find Anger Foot on itch.io for free, or if you enjoy it, you can donate to the developer, and hopefully, they decide it into something longer.