I can’t sleep. I’m sat in my living room, the world outside smothered in frost, locked away inside yet again. It feels as if the world is determined to keep us isolated, a lonely, floating island, the waves sloshing at our feet, a reminder of the barrier between us and others. So I’m sleeplessly stuck inside, my laptop cracked open, my brightness turned all the way down, my head aching.

Sitting on my sofa, my feet tingled by the frost that seeps through the cracks in my living room window. I press play, wait for the game to load up, my weary eyes telling me maybe now isn’t the time to play games. And yet, the moment Academia School Simulator pops on screen I feel as if the sun has finally risen, bringing with it a much-needed warmth. I begin to feel bubbly inside, and suddenly my all-consuming problems, for a moment, fade away.

Academia School Simulator is all about constructing and managing a school. You’ll start with nothing, an empty plot of land waiting to be tarnished with your limitless imagination and a lot of concrete. You will work your way up to something, a couple of walls hobbled together, a few students darting from one room to another dissatisfied by the fact that there’s no canteen. And then eventually, after years of determination, you’ll have a school that functions as a school. Good for you. Wipe that sweaty forehead, give yourself a nice pat on your back, and let out that deep sigh. You deserve it.

“Academia School Simulator is a real rollercoaster of a game.”

Academia School Simulator is a real rollercoaster of a game. When I started it, I felt as if nothing could stop me. I played it on easy (for review purposes, of course), had a boatload of money, and lots of space to let my imagination run wild. So I did, creating classrooms that were way too big, walls that stretched the budget far too thin, until by day two of the construction period I had an unfinished school and no money. It was missing walls, there was no money to hire a cook, no money to build toilets or a common room, but I had no choice. I had to let the students in, and oh boy, was it a train-wreck at first.

From the very few memories I retain from my time at school, I don’t remember all that much vomit. It would seem though, at my brilliant and almost undoubtedly safe and secure school, students were fond of throwing up everywhere. Watching the disaster that was my first few days of managing a school was immensely fun. I know that sounds weird, but it’s part of the fun of simulation games for me. It reminded me of the good ‘ol days of Rollercoaster Tycoon 2, or when I would trap all my sims in a room and watch as they starved. I’m normal, I swear.

“Academia School Simulator always has you doing something, so there’s rarely a dull moment in this game.”

But Academia School Simulator doesn’t want you to struggle for too long. You see as you’re crafting your school using a very comprehensive and intuitive building system, you can apply for grants which give you advance money, and upon completing their requirements, additional funding. These essentially act as side quests, small, easily accomplishable tasks that push you in the right direction and streamline the experience. Completing them will not only net you that cash reward but will also help you decide which rooms to construct next. They’re a neat idea and saved my school from total ruin, as with my newfound funds I could finally finish my walls. Hurrah!

During each year you must manage your school’s finances while researching new upgrades for your school that’ll allow you to micromanage a little easier or construct new zones. I felt I could build something new with each passing day, and I never had a slump moment. Even when a day dipped, I was able to fast-forward time until my research was completed and carry on with my general maintenance while it did. Academia School Simulator always has you doing something; whether that’s construction, completing a grant, or researching something, there’s rarely a dull moment in this game.

As the first year came to a close, I found I had created a functioning, albeit very basic, school. A smile crept on my face as I performed my final task of the year, putting a few trees out front to make it look a little prettier. Once the year is completed, you’ll get a screen telling you where you rank out of a thousand against other schools. By the end of year one, I hadn’t quite beaten my rival school, my student pass rate was reasonably high, and my school was relatively, but not quite clean enough. All of this gave me something to work towards in year two, and I finally appreciated Academia School Simulator’s gameplay loop.

To make matters harder, each year you get an increasing number of students who want to attend your school. In year one, each class had but 15 students. In year two, they had up to 72. It forces you to build more classrooms, more toilets, bigger canteens, and in doing all that, increase the scale of your school. I replaced all those pretty trees I made in year one with new toilets, and classrooms doubled in size. I felt like this was a really clever way of adding difficulty.

With new students comes more funding, but also more to micromanage. The first couple of days are difficult and takes a lot of time and effort to make sure your school is up to snuff. But by day three or four, I had the game pretty much in the bag, and spent the rest of year two researching, constructing new rooms that turned my school from basic and functioning to a little more extravagant.

“At its core, Academia School Simulator is a fantastic simulation of constructing and managing your own school.”

By the time the end of year two had rolled around, I was pleased with how my school looked. I was earning enough money that I wasn’t broke by the end of each day, and it meant I could execute more significant projects and expand in fun ways. As the end screen rolled around, I found that I’d beaten my rival, I was getting A+ in all areas, and in year three had unbridled amounts of cash. For the first time since playing, I felt as if I could easily handle the new hoard of students stampeding through my doors.

By this point, the game had come to a satisfying end, and with any other game, I would have stopped here. But I didn’t. Academia School Simulator had more for me, more content that I wanted to dig my claws into, more ways to expand my school, more difficulties to play on, more modifiers to customise each playthrough to make each one feel unique.

At its core, Academia School Simulator is a fantastic simulation of constructing and managing your own school. It may appear overwhelming at first, and the tutorial may not inform you of everything, like how to turn furniture (middle button on the mouse wheel, you’re welcome), but it is so intuitive and clearly laid out, that you’ll get the hang of it in no time.

“It lacks the human element.”

However, this game is missing one key ingredient, and it, unfortunately, let the whole experience down for me. As I was playing, I couldn’t put my finger on what it was that felt wrong, what it was that the game was missing. But then it hit me. The whole point of building a school, or managing its resources, making sure it has four very stern walls and not three and a half, is so that the students can succeed. The one thing this game was missing for me was its students.

Of course, they are literally there, whizzing around from classroom to classroom, and they all have their own unique names so you can vaguely discern who is who. But there are so many of them, and they are not distinct enough, so I never cared about them. What I had hoped for was the ability to see your students through to their final exams, watch as they grow from being delinquent, demotivated, disinterested kids into fully-fledged adults who cared. Watching as they go from year to year with a newfound sense of ambition and pride in their work.

“My favourite student abandoned me for my rival school!”

As a result, you can’t create narratives or feel connected to your school in any meaningful way. The game tries to find ways of making you interact with individual students. You can click on each one of them to get a chart of how they’re feeling, what they like and dislike about your school, and a few traits that build up their personality. You can also favourite students, which adds them to a new tab, making it a little easier to manage. But it all feels very Rollercoaster Tycoon or Planet Coaster, wherein you have hundreds of visitors, and you only click on them to see which rides need tweaking, or what stands you need more of to facilitate their needs.

I did favourite a student, one that I had renamed in a futile attempt to build some connection with him. Unfortunately, I spent most of my time zoomed out as I rushed around the school constructing new facilities for my pupils, which meant I couldn’t keep track of him. I couldn’t pick him out amongst the sea of other students, and after a while, I stopped caring. Eventually, I was informed that my favourite student had abandoned me for my rival school. Something I felt I had no control over and came more out of RNG than anything I did. My school was perfect at that point. The students had everything they wanted, so I had no idea why he upped and left. But honestly, I didn’t care, I just shrugged it off and went on with my day, building more and more.

While the construction side of Academia School Simulator is incredibly satisfying to play, the game, simply, lacked that human element I was hoping for. It in no way tarnishes the construction side of things, and if that’s what you want out of this game, then I strongly recommend you play it. It is incredibly intuitive and easy to pick up, yet complex enough that I never felt bored, and there are loads of things for one to experiment with. There’s even an option to sell your school and start anew, which acts as a new game+ type mode. You can keep all your research, but start a brand new school with all your newfound knowledge of school construction! 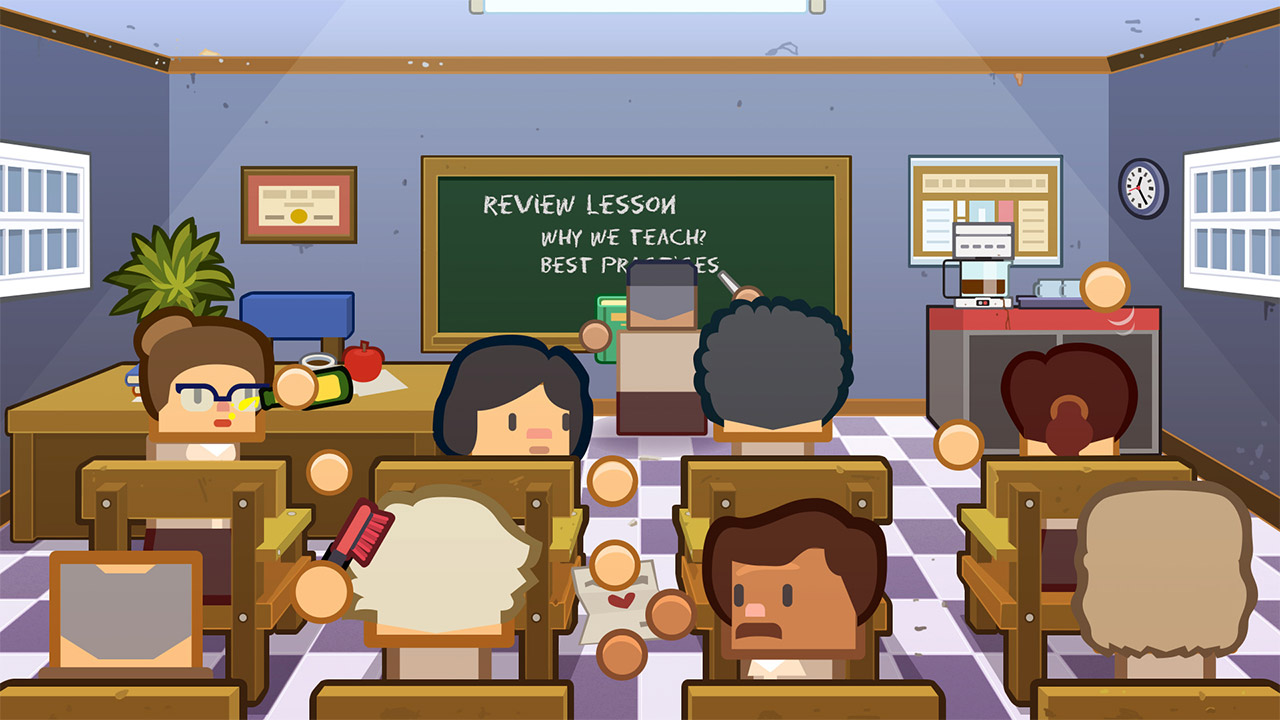 Academia School Simulator Review
Summary
If you wanted a more human-driven simulation game, then you'll be a little disappointed. It isn't a deal-breaker, and I still had an amazing time, one that I will go back to time and time again in the near future, but it is worth mentioning. Ultimately, Academia School Simulator reminds me a little of my own time at school. It could be really fun, but at the end of the day, no one really cared about the students.
Pros
Overflowing with Content
No Dull Moments
Addictive
Cons
No Human Element
Lack of Depth
Poor Tutorial
7