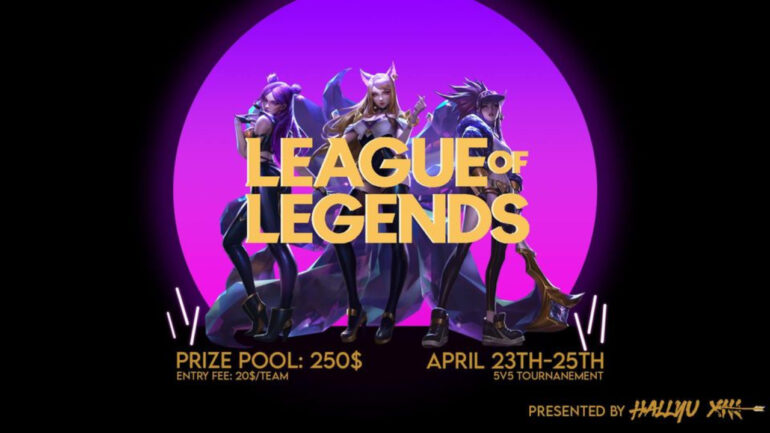 The Charity League of Legends tournament organised by Hallyu and the Gaming Club is well underway. These two organisations came together to fundraise for the Asian Solidarity Fund fighting against AAPI hate in Canada and put together a full-blown League of Legends tournament to that end. I had the chance to interview the head organiser and some of the participants, included below. The knockout stages are about to commence tonight, with the group stage concluding yesterday, albeit not without drama.

I had the privilege of first interviewing the one and only William Zhang, the head organiser of the tournament. I asked him about who he is, what role he plays in the organisations behind the tournament, and the fundraiser’s cause.

One of the teams had contacted me prior to the tournament and requested a team interview. I obliged and ensued an absolutely hilarious 13 minutes where we met each member of Team Kaguya best girl, which champions they mainly play, what role they play on their team and what they think their prospects are!

After the first game, which I had a chance to cast, many of my colleagues were curious about the questionable decision by Team Blackout Squad to play Evelynn in the middle lane. As a result, we welcomed the team’s captain, Livxbubbles, in the commentary booth and had Peng_uin grill her on that dubious play.

With the knockout stages over, the standings are as follows:

Most of the tournament went without any issues, and even teams losing in a lopsided fashion were just happy to be part of the tournament because of the great cause. There wasn’t a hint of the infamous toxicity that players have come to expect when League of Legends and competition meet.

That said, I do say ‘‘most’’ because there was one major incident towards the end of the group stages. While the two fourth-place teams were eliminated, the three third-place teams had to play each other to see which of them would go to the knockout stage as well as for position (7th or 8th seed). The tournament participants are all in the same Discord server to facilitate information fluidity and communications with different teams and enable every team to have their own VC (voice chat) during the games if the in-built voice chat system within League of Legends does not suit them.

During the build-up to the last rounds, several Chinese players began conversing in Chinese in the general chat. At this moment, the broadcaster, Fabio, decided to weigh in about the situation during the stream and made a very wise suggestion: make a rule that allows only conversations in English or French in the chat, Canada’s two official languages.

In reaction to this development, an altercation occurred between several Chinese players after one of them made the following comment:

Obviously, many other Chinese players, specifically from Team Ma Dou Chuan Mei, got upset and mayhem ensued. While one can think her joke is perhaps in poor taste, making a self-deprecating joke about her own culture or language, as she is Chinese herself, is not exactly what one would call racist. However, with the context of the tournament and the cultural sensitivities flying sky-high, the humour didn’t land with some, and the reaction to the alleged racism was to make egregious comments insulting other players, threaten to physically assault them, and bully Ruby to the point that she had to leave the server.

While the beginnings of the drama happened while the stream was running, the broadcaster had the presence of mind to keep the bulk of it off stream. This was almost certainly for the better. Fabio Gong Omonte said after the fact: ‘‘Neither Hallyu nor the Gaming Club promote racism or hate speech.’’

Ruby was later invited on stream towards the end and interviewed by the casters. Her full explanation after the stream was that it was banter directed specifically at titguette (the same one I interviewed), who is a close friend of hers. At the same time, all the players were not literate in the script, so she was trying to be inclusive by implying that everyone should use English or French exclusively* in the general chat. In other words, she was trying to be considerate to others.

To end this chapter, being one of the organizers of the tournament myself (in name only, William did almost all the work), I will leave the reader with the following take on all the drama that I happen to agree with, take it however you like. Below are comments made by a user who asked in succession for addresses, threatened to physically assault others and told his victim to find something to eat in the washroom. Afterwards, when I confront him and his friends for bullying, he completely denies doing so. Unfortunately for him, the internet doesn’t forget.

Hopefully, this is all water under the bridge and we can move on with the knockout stages in peace.

In conclusion, you didn’t think I would end on a depressing note, did you? Here are our hosts, William and Fabio, sharing a wholesome nostalgia moment as they grapple between their Gaming club side and Hallyu side and a CAT CAM BONUS VIDEO!

You can watch the tournament’s knockout round tonight at 6 pm at https://www.twitch.tv/ext1nct9 with top tier live commentary from Fabio Gong Omonte and William Zhang. Who will win the whooping winner’s prize of CAD250$?

Find the Gaming Club at: https://www.facebook.com/MarianopolisEsportsClub

Special thanks to EG Chungus for his contribution to this article!